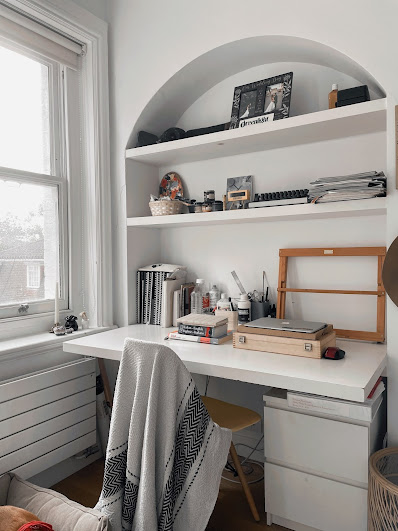 My writing day starts with a large mug of coffee - milk, no sugar. I recently bought an electric brewer which I can program to start at a specific time, so (if I remember to set it…) I get to wake up to the sound and smell of coffee brewing. It’s a small thing but it’s been kind of revolutionary. I often have very vivid dreams so I spend the first part of the morning just trying to reacquaint myself with reality and trying to feel grounded. Sometimes I’m successful. Hah. I try to ease into the day so I usually read something, a book or the newspaper, while I have coffee instead of looking at my phone right away. At the moment, I’m reading a book called “Impressionist & Post-Impressionist Drawings” which is about the process of sketching and how it related to and informed the painting of the preeminent painters during those movements and it’s very soothing. I was a preschool teacher for eight years before moving to London in early 2020 so I used to wake up before sunrise, get dressed and rush out the door to start my commute. Since I don’t have to do that anymore, I’m really valuing my time in the morning and appreciating the slowness of my new routine.

After coffee, my husband and I take our dogs out. We don’t have any outdoor space so they force us to take a walk around the neighborhood every day which can be a drag if it’s raining or if I didn’t sleep well but I’m always grateful for it afterwards. I’m still very much getting used to living in the inner city. Even though I lived most of my life in and around New York, I’m at a stage where it feels somewhat overwhelming for me to be in the center of things. My threshold for chaos used to be much higher, now I just want to chill. Being out with the dogs, who are old and slow, in the early morning before businesses open and traffic starts is a nice way for me to dip my toes in and experience London in a way that feels good for me, appreciating the way the early light hits the red brick on the old buildings, the mist that slicks the cobblestone streets, the sound of seagulls cawing to announce dawn as they circle overhead. It’s more gentle, more sensory.

I recently finished writing and editing my first novel which had been circulating inside of me for the better part of ten years. Now that it’s finished it’s like, a weight has been lifted. It feels good, like it’s freed up some of my brain space to work on other things. It was a complicated story to write and I hope that I did it justice but I don’t really have any interest in querying it or trying to get it published. It just exists and that’s enough for now. We’ll see. I think my relationship to my writing has changed a lot over the past two years. My first published collection, An Accumulation of Vapors, is forthcoming from Gob Pile Press in the spring and the whole experience of working with Bram Riddlebarger has been enlightening and rewarding. Being connected to supportive people who have the same vision and sort of ethos around writing and publishing is the saving grace of this industry. I’m very grateful for the experience of putting my work out there for the first time this way. It’s all been very positive.

I’m working on a translation project which takes up the most of my writing time these days. I found a chapbook tucked into an overstuffed shelf in an old bookstore down an alleyway in the ancient city of Alghero, Sardinia a few months ago. It’s a thin book with a fairly nondescript black and white cover so the way it just sort of appeared to me felt intentional. I’m not religious but everything about Sardinia feels very spiritual to me. An Accumulation of Vapors was born from my experiences there (it’s sort of about communicating with ghosts, connecting with the past) so I can’t help but feel like I was meant to find it in a way. The book was written in the seventies and it’s the only published work of the author. The press no longer exists, it’s a true relic, and I’m just very inspired by the whole process of doing this. It’s an arduous undertaking, like solving a puzzle, but when you sort of unlock one piece of it, it cracks the whole thing open and it’s the most beautiful moment. It’s inspired me a lot in my own writing, to play with language more, to do something unexpected.

My writing ideas usually come to me at surprising moments, like when I’m standing in line for something, taking a bath, or listening to a piece of music. Often they appear as fragments instead of a whole concept, like a combination of words that sound good together, or the beginning of a paragraph and I have to sort of figure out what it means, then I can start to write.  I used to try to hold on to all these fragments in my head until I could dedicate time to writing but I was talking to someone who is sort of a mentor to me and she gave me a valuable piece of writing advice which was to just get it down and save it somewhere at the exact moment when it comes to me whether it’s taking notes in my phone, jotting them down on receipts or napkins, making voice memos, essentially doing whatever it takes and not worrying if people look at me askew. That’s what I do now and it’s part of how I put my book together. I get it down and assemble it later. Thank you, Niloufar.

I’m also a painter so my work area and creative process are very multi-experiential. My work as a painter kind of necessitates a plethora of equipment. In an ideal world I’d have an art studio or at least a garage or something but that’s not the reality of where we are right now. I’m grateful for this little nook that allows me to organize the things I need so setting up and disassembling is easier. While this one bedroom flat that I share with my husband and two sixty pound hound dogs can feel cramped, it’s actually the most spacious apartment I’ve lived in and it works for us. My husband is very musical so there’s stuff everywhere, every inch of this place is being utilized. Between the paint and the piano and the guitars, there’s a lot going on... I’m used to small spaces, it just means I have to be more intentional about how I work which is ultimately a good thing. This little writing nook with the built-in shelves really sold me on the place when we first saw it.

I don’t write every day but I do try to do something creative. If I don’t, I feel sort of depleted and restless. My approach to everything I do is to try to trust myself and be graceful with myself. I try to meet myself wherever I am on any given day and just go with the flow.

Claudia Lundahl is an artist and writer from New York who currently lives in London, England. Her work has been published in many marvelous places including Vol. 1 Brooklyn, Maudlin House, The Mechanics’ Institute Review, New World Writing, HAD, STORGY and others. Her first collection, An Accumulation of Vapors, is forthcoming from Gob Pile Press in 2022.