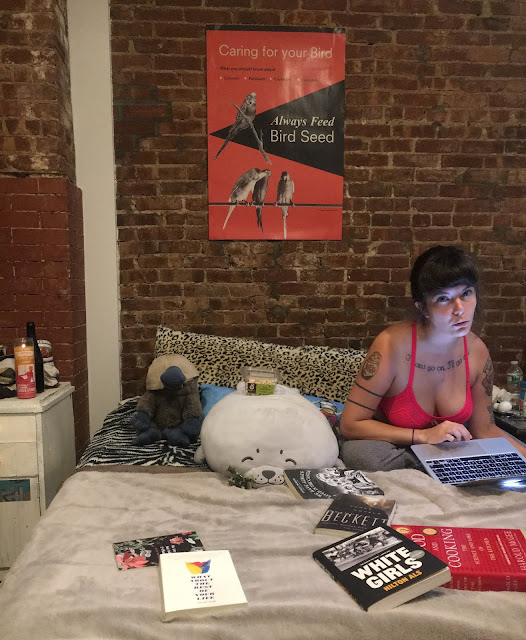 Wake up/grab a brush and put a little make-up

My average writing day begins and ends just like yours does, at home, sitting on top of my bed, because no, I don’t have a study, what am I, a fucking millionaire? My sincere apologies if you are reading this and have a study, or perhaps some kind of manservant who operates as your desk. Both those scenarios really do sound cool and sexy and I am just a bitter day-job-haver. Also, sometimes my average writing day happens at my day job, but we’re not going to talk about that because papa doesn’t want to get fired today.

I roll hangoverishly out of bed and wiggle into a pair of fetching grey sweatpants from the little boys’ section at Target, and maybe a bra if I’m feeling hifalutin that day. But this ain’t Versailles, so probably no bra. The experts all say to dress for success, and I’m no exception.

(Note: I also tried the preceding paragraph with ‘dress for the job you want and not the job you have’ in the place of ‘dress for success.’ Feel free to sound off in the comments if you think I’m a dumb idiot who should have chosen differently, because I really want this post to be a fun and interactive experience for all of you.)

If it’s an average day, I’ve forgotten to buy coffee for like six or seven weeks. It’s nine in the morning and if I could pull a lever and someone in the world would die but I’d have a pot of fresh coffee all to myself, well. My roommates would gladly share their coffee with me but I am, how you say, a finicky bitch: I can only fuel my engine with Devocion-brand coffee.

At this stage, my average writing day has been happening for fifteen minutes, AKA sixteen unusable words and roughly nine hundred tweets about how much it blows that Postmates doesn’t deliver Devocion to my neighborhood.

Go get some coffee, idiot

I did a two-week residency over the summer, with the magnificent folks at SAFTA, and I was prolific like a mutherfucker. I woke up and wrote and wrote and I’d look up and it would be evening. Long shadows and fussy crickets. Or I’d read an entire book in a day, moving around the room a few times an hour to hold the sunlight. I am not always this inattentive to my writing, which may I remind you is the love of my life and probably the gal I’m gonna marry someday, that is, if she’ll have me.

I am defending myself not from you, stranger passing by, but from the mean little man in my brain who begins reminding me around ten in the morning that Philip Roth won the National Book Award at the age of twenty-seven and probably never had caffeine diarrhea once in his life. If you don’t speak ancient Greek, that last sentence is basically the same as the epitaph at Thermopylae and I am a handsome genius for writing it. (And if you do, just be cool.)

Anyway, you were working?

I wrote all of The People’s Elbow this way, hunched over my laptop on my bed, wrecking my spine, surrounded by provisions like an ailing Habsburg prince. I wrote all of my second manuscript this way. Inhaling the occasional handful of peanuts to stave off hunger, typing through the salt-induced swelling of my fingers. Keeping all the books close that I wanted to reference, no farther than my arm could reach, so that I’d never have to break the trance in order to find what I needed to read to reorient myself in my project. Perhaps lighting a candle, even though I’m Jewish and that’s not really our bag.

I didn’t count words but three-ish hours in, my brain would start to short-circuit and my hands would shake and I’d know it was my body commanding me to stop. Sometimes I’d stop then, sometimes not. My attention span was never good but my body was telling me that I was getting work done, and moreover, that I needed to rest.

But it didn’t work that way, ever. I may have needed to rest and I would have loved to, but there was work because in my life, there is always work. Not writing, which some writers call their work, but wage labor. Something humiliating to shower for, dress for, commute to, and smile during. The last day I had free, truly free, was the day my father died and I didn’t get much writing done that day, just like I didn’t get much bed-departing or sobriety done that day.

I’m just kidding. This advice from Hemingway has always struck me as unhealthy. I prefer to write drunk, edit drunk, and then spend the following drunken four hours committing to plans that I will later need to creatively bail on.

I’m just kidding. In reality, I’m a stoner, not a drunk, and this average writing day is no exception. Jews are not a drinking people. The last time I wrote drunk, it was because this chef had just ghosted me and I needed to put my feelings into verse immediately, while listening to the discography of Amy Winehouse. I ended up getting the last laugh because Dream Pop picked up the poem and the guy begged me to go out with him for like two months straight after that, so who’s the sadsack dumbass now, Liam?

At work one day, feeling hopeful, I tell a customer that I’m a writer. Award-winning, critically lauded, etc., etc.

“How cool,” she says, as I press her change into her hand, which I note is both manicured and paraffin’ed. “The Instagram posts that the cashiers here make always have such creative captions.”

Where my inspiration comes from

Seething, I unlock my phone and type it into the ongoing note in my Notes app for such matters. There. Happy? I think.

“What the hell are you doing?” my boyfriend grumbles, squinting into the offending light of my phone.

“Nothing,” I say, and the next day I check my ongoing note like I always do and I write a thousand words about Rivka and the Jew Strangler and I’m later written up for being late for work as a result, because this is the sort of nonsense problem that a writer is always afflicted with.

Rax King is a dog-loving, hedgehog-mothering, beer-swilling, gay and disabled sumbitch who occasionally writes poetry and works as assistant editor for Sundress Publications. She is the author of the collection The People's Elbow: Thirty Recitatives on Rape and Wrestling (Ursus Americanus, 2018). Her work can also be found in Barrelhouse, Dream Pop, and FIVE:2:ONE.