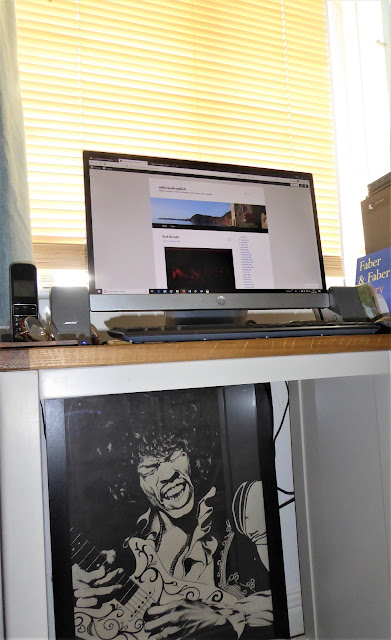 It was in taking the picture of my desk where I write and seeing the poster of Jimi Hendrix beneath that I came up with my ‘clever’ title for this piece. In many ways this reflects how I like to write: finding accidental or more actively researched – but still found – ideas and/or prompts.

The poster, an original print from the late 60s, had hung in the hall until it fell and I placed it under the desk temporarily, a few years ago now. I sit each day with it from around 7.30 am and begin the routine of checking for emails, the latest news, new music, any hits/comments on my writing blog, and a little later, those on my music blog. Because of the latter one, which I am not writing about here, I will generally be listening to music, which I love, but also often to review.

I write all day, on and off so no precise routine, and well into the evening and night. As a carer – though we get out and about if in brief excursions locally on occasional mornings – writing is more than a personal urge and compulsion, which it is powerfully, but also to occupy my time at home. In this respect, it is a substantial aspect of my daily life because without this desire and commitment, I would be floundering. I am a social person, love to talk and would prefer to range further afield. This not being how it is, daily writing is everything.

I write mainly poetry, though as a former English teacher who is still appalled and angered by testing regimes and target cultures, I also vent about this regularly on my blog. Otherwise, my writing of poetry is driven by a genuine eclecticism: for many years it was almost exclusively sonnets where I liked and felt motivated by its conventions, loose as I made them, with the compactness focussing thought and composition. Though I also always indulged, I have of late been more solely experimental, from producing concrete poems to a wide range of found ones, this latter leading to two completed remixed poem sequences based on, respectively, the English Novel Canon and the Great American Novel.

I am currently writing a found sequence of prose poems prompted by random themes and then further findings. So an important other part of my daily writer’s routine is seeking outlets for this, mainly online magazines and journals and the wonderful editors who take these and support. The searching and submitting is in itself a huge commitment – you have to have a strong desire to be published [and what writer does not want this?] so also experience countless rejections as well as the huge pleasure of acceptances and seeing writing in print.

None of this works to set routines within a day, but each day is filled by it all, thankfully in such significant ways.