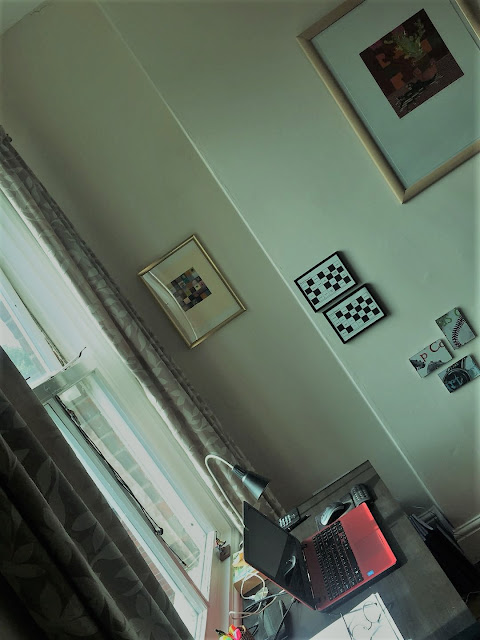 The last time I had anything like a typical writing day was when I worked as an operator at a BT call centre, taking (among more mundane enquiries) emergency 999 calls. In those days I would finish work at whatever time, go home, have supper, and write, usually with a bottle of wine to hand and music playing. Then, in 2005, I went to China to teach, which was very exciting and also very busy, and ever since I’ve written (a) when I’ve had time and (b) when I’ve been in the mood. (a) and (b) have not always occurred at the same time. In 2011 I began the One Million Elephants Couldn’t Begin to Understand daily “notations” section of my website, which was designed to make me write something – anything – every day. And that’s still going, daily, although its original purpose no longer really exists, to be honest. I am probably just a creature of habit.

I returned to the UK for keeps in February, and I don’t have a job because (a) I’m 65 approaching 66 and get some pensions and (b) I left China in large part because I’ve had enough of working for other people. I’m old. I want my time to myself, as much as possible.

So, with most days kind of “free”, how do I write in them? Well – it took me a few months to get used to being back in England, and to having so much time on my hands. But I’ve figured out that I have time to work and time to relax, and I can do as much of either as I please. I feel good when I have a productive day, and I don’t feel any less good or guilty if I have a day doing nothing. And of course I have hobbies that pass the idle hours. I enjoy horse riding and jigsaw puzzles, and my friend, the poet Eric Eric, has been urging me to take up tatting, but I don’t think I have the eyesight for it, or the interest.

In terms of writing, I always have a few things on the go. Apart from writing fresh and new and original genius poems (irony alert), I am also steadily working my way through translating and producing “versions” of poems from the great Tang dynasty era of classical Chinese poetry. Poets like Li Bai and Du Fu. Some have been featured in magazines, and I have an eye to publishing a collection of them at some point. This work initially entails basic translation, which is fairly journeyman kind of stuff, although little to do with the Chinese language can be classed as particularly easy; then comes serious consideration as to what I want to do with the poem in terms of working a “version”, and then there is the actual composition, editing, working and tweaking. This can take hours, or days, or weeks. It’s business as usual, in other words, because the same goes for my own poems with regard to how long they take to do. Sometimes they arrive quickly and need very little revision. Other times they sit around a while waiting for the right tweak, the right word, the comma removal or the insertion of a thoughtfully placed dash. Sometimes they sit around for ages then get thrown away.

Both the work on my own poems and the translations really have no regular schedule. It’s about being in the right frame of mind and the mood. I can write every day, and usually I do, but it might only be a few words. Other days I can write quite a lot, or revise something a lot. But there is plenty of thinking going on even when I’m not actually at the desk writing. Recently, for example, I’ve been writing several prose sequences – they are probably prose poem sequences – but quite how to present them and exactly what form they need to ultimately take has been occupying my thoughts for some time. The thinking is happening in the back of my head even as we speak.

And I also review on a fairly regular basis. That tends to be something I just sit down and do over the course of a day or two for any one book. But of course I have to read the stuff. Well, usually I read the stuff. Some people think my reviews are mainly negative, sometimes verging on the harsh and cruel, but they’re wrong. They just don’t realize how much dreadful poetry there is out there being accorded either undeserved accolades or, just as often, back-slapping plaudits from so-called reviewers who want to get their own poems published so won’t risk upsetting anyone who might know someone who might know …. and so on.

So, what’s a typical day? I get up when I’m ready to get up, have a cup of green tea, do my half hour of exercise on the yoga mat and the exercise bike, have breakfast (coffee and toast), and by ten I’m usually at the desk doing something, even if it’s not very much. I make myself do a couple of hours of some kind of work - and that will include reading, either something for review or something poetry-related of my own choosing -  in the morning, and a couple of hours of the same in the afternoon. Come the evening I might work if the muse (Mrs. Baxter) shows up, but by 8 o’clock I’m more likely to have had a couple of glasses of wine, a good supper, and will be sprawling on the couch in front of something on TV. I’m retired. I’m allowed to be lazy. Having said all of which, if I have a day where I don’t feel like working I’ll have a day not working.

Of course, what I’ve missed out is the shopping, the housework and the laundry, and the coffee or a couple of beers with friends (I have a few). And I decided a month or two back that weekends should be weekends. In China, weekends were often compromised either by my girlfriend having to work, which meant our leisure time was likely screwed up, and also by my having the usual commitments a teacher has: marking, lesson preparation, and the like. Now they are much more about lounging around unwashed, reading a real paper copy of the newspaper instead of the annoying website version, watching the football or something on TV, reading books that have nothing to do with poems, and sleeping when the body says sleep. So, it would appear that my typical writing day either doesn’t exist, or is a bit of this and a bit of that, and eventually things get done.

After 40 years in poetry world I’ve decided not to stress about any of it. Apart from sending stuff to regular outlets like Stride, I only get around to submitting work to other places two or three times a year. I find it a bit of a grind, to be honest, spending half an hour getting the stuff together, sending it off, then waiting six months for a reply. I know it’s part of the process, but I don’t get too worked up about it these days. What usually happens is that one day it will occur to me I should do it, and then eventually, on another day, I’ll dedicate a couple of hours to sending things I deem worthy out to somewhere or other. Writing is the pleasure, and having readers who enjoy what you write is a bonus, so while publishing is still obviously a consideration it doesn’t occupy a huge part of my thoughts beyond the fact that I have to produce work that’s good enough for strangers to read. Have to? Well, now there’s a good question …..

Martin Stannard lives in Nottingham, England. He was the founding editor of joe soap’s canoe (1978-1993) a magazine some people still regard as legendary. It can be found archived at http://martinstannard.com/jsc/jschome.html. He was also poetry editor of the online art and poetry magazine Decals of Desire (http://decalsofdesire.blogspot.com/). A poet and critic, his most recent collection is Poems for the Young at Heart (Leafe Press, 2016) (http://leafepress.com/catalog/stannard/stannard.html). Forthcoming is Items, a chapbook from The Red Ceilings Press.