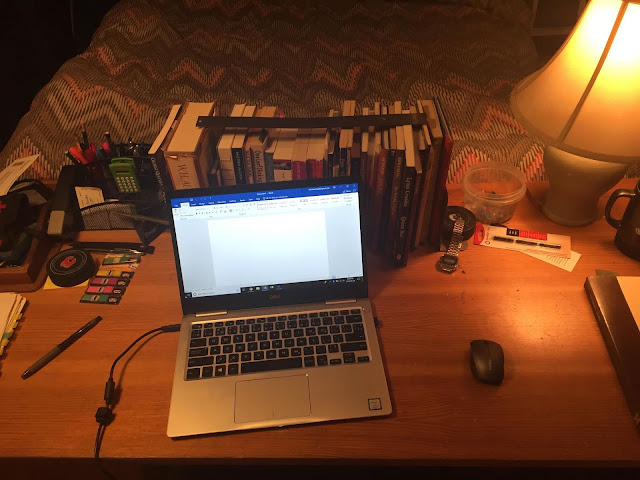 I am an ‘emerging’ writer – my best work is emerging, my love for writing is always in the process of emerging and, most important to consider for this piece, time in my schedule to write poetry is still emerging.

I start my day whenever the sun becomes bright enough to wake me through my window, the curtains of which I keep parted so that I can look at Ezra, the many-armed cactus I have on the sill. I named him Ezra based on a bad pun that made me laugh: Ezra Pound wrote The Cantos, and my Ezra is a cactus whose arms make him appear as though he is made of many plant-os. Today the sun wakes me from behind Ezra’s flailing limbs around 8:00. I have made coffee with a bit of milk and drink it while checking social media by 8:10 sharp.

After some quick video games, I drive across the city. There is a small Hawaiian-themed coffee shop near my school that I like to work in that earned my allegiance by serving tea in a large beaker, which you are then tasked with pouring into a small ceramic cup that resembles the ones you get in every Vancouver sushi restaurant. It’s Friday, so I listen to a Dungeons & Dragons podcast that comes out weekly while I drive. I get breakfast from Tim Horton’s and hear the details of this week’s battle while fighting my way from North Van to Kitsilano, employing the egg wrap I bought as a weapon to threaten the BMW that cut me off near Science World.

I arrive at the Hawaiian tea/coffee place and eventually work up the courage to check my emails. Submission responses are out there, always coming for me, positive or negative. I distract myself with a grad school essay I’m writing about Robert Service.

I walk across the street to get a sandwich. My car hasn’t been towed, which is delightful. I write a poem about the time my car got towed while I eat my sandwich, recalling the conversation I had with the police on the phone when I thought for five minutes that somebody else shared a level of self-respect low enough to be seen in Rhonda, my Kia Rio with a perpetual bad cough. I finish that poem and write Rhonda a sonnet, wondering what kind of poems she would like best.

I have finished my essay and lunch, and moved to a new coffee shop. This one is outside the tutoring office I teach from, so I can work right until class. I open my chapbook manuscript and change the title four times until it feels a little more appropriate. My manuscript is too short, but I edit existing poems instead of trying to write more for it. Today I spend a lot of time on a poem that wonders what kind of bread Christ chose to serve at the last supper. I have waivered back and forth on the issue since the idea first came to mind, but now firmly believe it was sourdough. Or white Wonder bread, if that was on sale at the nearest Loblaws.

I write another poem. This one is long, meaning more than a page. There’s one line I like from the whole thing, and I’ll probably use it later.

I teach the Odyssey to sixth graders whose parents requested I teach them a ‘classic’ instead of the Percy Jackson series. The students struggle with Homer’s language, the idea that Homer might not have been one single guy, and the fact that people would just recite stories by other people for a living in ancient Greece. I tell them that’s what audiobooks are.

I finish class and return to the car, eager to hear how that DnD battle ends. I drive about halfway home to a poetry reading near downtown. The reading leaves me with conflicting emotions: I am excited for my friend, who reads her poems with incredible grace, but wish I could read the story of my stolen car to a room of people who couldn’t escape my words.

I draft tweets about the event and delete them. I write down a couple of lines in the car before I drive home from the reading.

If I have energy, this is the best time to write. I pick up a book and read a few poems before penning my own. They are strong poems, I write an outline for a review of the book as I finish my night’s reading, perhaps this will become a review somewhere. I write poems to poets I’ve thought about today, then try again to talk about a traumatic event from a year ago that I still haven’t found the words to describe. They do not come tonight.

Bed. I lay down and listen to an advice podcast I’ve been following since I was a teen until I doze off. I think they had some sort of advice for a guy who wasn’t sure if he should get one cat or two. I thought he should only get one, they said to get two so they aren’t lonely. Our disagreement will be today’s last concern.

A.W. French is a poet and academic from what is now known as Vancouver, BC, where he is currently pursuing an MA in English with a focus on Canadian poetry at the University of British Columbia. French’s poems have previously appeared in journals across Canada, America, and the UK, while his reviews of books of poetry by Canadian writers have appeared across the country. In addition to poetry and reviews, French writes one hell of a thank-you card.