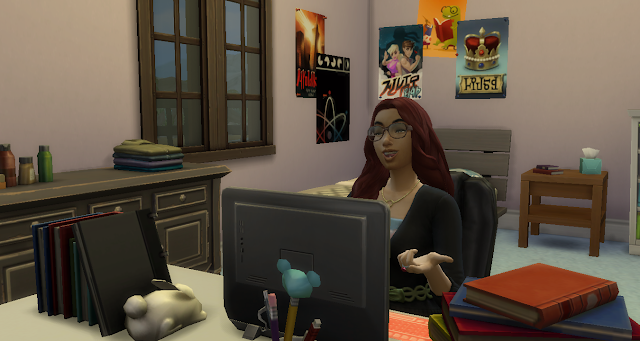 On 30th March 2019, I cybernetically declared, “from now on, i’m only writing poems about stuff that happened to my Sims.” As a tweet, it performed okay. As a project proposal, it hardly panned out. Nevertheless, games and the generous genre of “stuff I do on the Internet” has suspiciously dictated my writing in the past quarter. Right now, it’s not Sims but probably the Game of Thrones fan-mod for Crusader Kings II, a game about how people with swords feel about each other. Last month, it was probably Far Cry 5, whose fantasies of impotence and non-racialized apocalypse inspired by first prose-poetic thing, “Let’s Not Play” in Half a Grapefruit.

I’ve been writing adult poetry for as long as I’ve had this laptop, which also operates as my platform for gaming, research, writing, and my job as a listicle producer. I guilty reify what Melissa Gregg in Work’s Intimacy coins as “presence bleed,” or how “communication platforms and devices allow work to invade spaces and times that were once less susceptible to its presence.” At any given moment, my screen might be productive cacophony of listicles bleeding into poetics and point-and-click entertainment—more likely a YouTube video essay, though. I work largely from home, so it’s technically always Listicle Time.

Maybe my “POemTRy Drabblez” .docx is open next to a Let’s Play video, unravelling on picture-in-picture mode in simultaneity with a listicle about courtesans, which itself is overlapping a draft of a more completed poem where the Internet is an Asian Lady. I might have quasi-single-handedly pioneered every single Tudor princess, wife, and king, and queen article at work. Twoscore-and-two facts on the ginger big dude with the money and spouses and who maybe had the syphilis (fun fact: he didn’t, probably!)? I can get that for you. It’s nice to levy my English BA and eighth-grade passion for decapitated queens towards multiple hustles.

Building a soon-due listicle for a French movie star, whom I thought was dead two days ago, I unconsciously drift to “Can the juxtaposition between her animal rights work and xenophobia be spun into four stanzas?” Writing poetry—maybe something about Twitch labour?—I’m mentally rifling through the Zotero bibliography. Academic articles, when done right, are a data mine of powerful verbs.

To a degree, even Instagram has become part of “the job.” In addition to liking astrology memes, the platform has blossomed into a great place for Call for Submissions. Freelancing—a word whose etymology is rooted in medieval mercenary work—revolves so much around the wrangling and gutting of time. As much as I perform busyness like a good millennial, I thrive on deadlines.

If I recall from a “Careers for English Majors!” guest from my undergrad, we aren’t supposed to have jobs that demand we write. It’s mentally taxing; we’re supposed to come home, unbutton our blouse from “lower-brain functioning work,” and impress our fatigue upon the canvas of the page. Bold to assume the writing of office, platform, and page will ever be distinct categories. In a “presence bloody” world, I stumble into my PhD program with a hand on the jugular.
Analog is this year’s experiment. Leather-bound cat notebooks, like laptops, might lend themselves to fetishize productivity too, but it’s going well. There’s patterned paper. I’m less distracted; the scarcity of page and ink forces me to be more economic with my writing. What’s a poem look like, for example, wrung around a tabby tea party? If hustle has to rule my life, there may as well be felines.

Christine H. Tran was born to Vietnamese refugees in Scarborough. Her writing has been featured in untethered, Train, The Trinity Review, alt.theatre, and other places. She is completing her PhD at the University of Toronto’s iSchool, where she plans to explore racialized and gendered labour in Let’s Play and social media entertainment. She is also an Honorary Helper Elf at Brick: A Literary Journal. Review her work at https://thechristinet.wordpress.com