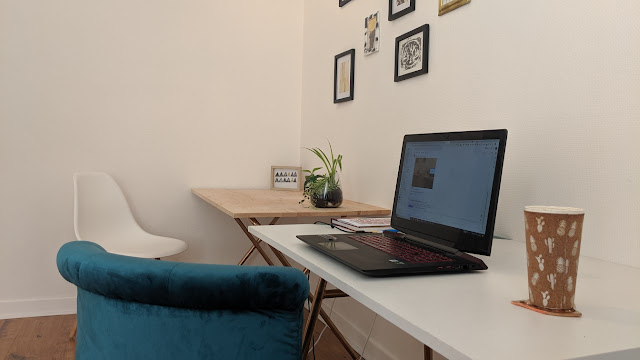 There was a reservation today at the coworking space I co-manage from three of our regulars, so I got myself there two hours early to open and sneak in some writing time. Back when I had a 9-5 in the UK, I used to get myself into a Costa before work and use the hush of the city waking up to get some words down on the page. There’s a lack of early-morning cafés in Quimper however, so opening this coworking space has been great. However, it only works if I get myself early enough, before the notifications start buzzing on my phone.

I miss the white noise of cafés, but the advantage of being here early is that I can blast my music and have as many dancing breaks as necessary. This morning I’m doing some additional world building and going back over my first chapter with fresh eyes. I think you’re meant to edit when you have a complete draft, but as I’m not a natural plotter, I do things more idiosyncratically. Which is why I’ll probably never finish it.

My brain is all over the shop this morning, so I’m not making the progress I’d like, barely 200 words down. Still, every word is a small victory I tell myself.

Poetry is not something I can schedule, it’s more of a drone in the back of my brain. I’ve got an idea for a new series of poems, and it’s more research-based than my previous work, so I’m reading, talking, trying to find new stories that could fit within the whole. Then I just need a thread to tug. If I find the thread, the poem emerges from the research, the talking, the thinking. Finding the thread tends to happen when I’m away from my computer or notepad and going for a walk.

I have an office desk, surrounded by books, but I sometimes find the chatter of the spines too much. The coworking space is clutter-free (though I am starting to get lax) which makes it better suited for work and writing. It also has a distinct lack of cats sitting on my arms to prevent me from typing.

I foolishly thought that as a freelancer, I’d be able to make more time to write, but it’s obviously quite difficult as I don’t have a routine down. This last month was heavily disrupted as I was touring my latest book across the UK and then co-running a writing retreat, but I now have a few weeks of staying put and I’m determined to get myself back into good habits again.

I used to use timeblocking quite effectively, which is the art of scheduling things for yourself, that you don’t let outside elements disrupt. I am naturally rebellious however, so I have to fight against the urge to dismiss my own self.

Still, just as 200 words every day don’t look like much but eventually add up to something, so do my little efforts to put my writing first. It feels like I’m still struggling to make time, but I look back on myself 2-3 years ago, juggling far too many projects and prioritising the writing of others, and I know I’ve moved forward.

The regulars have arrived and are softly talking to each other – they all live in different cities and this is where they come a few times a month to have team meetings. It’s a difficult sound to concentrate with – if there were more of them, it would have the same effect as a café, but they are too few and at a level where I automatically want to eavesdrop rather than type.

I wish I had brought my headphones with me so I could keep listening to music – but that’s a habit I’ve dropped since moving back to Brittany. When I lived in the UK, I couldn’t leave the house with my helmet of headphones, a way to block out sensory overload and any unwanted approaches. They are now in a drawer, mostly forgotten except for long journeys. I’ve had to buy a car to get around as public transport outside of the city is patchy at best, so have reconnected with the art of car-singing and car-dancing. It goes beyond that, I walk without headphones now, because I’m not at war with the environment around me. I can hear the birds, the conversations of two women stopped in front of a door, snatch a few notes of music from car windows… Walking as an open notepad.

Claire Trevien is the British-Breton author of several poetry collections and a history book. The Shipwrecked House was longlisted in the Guardian First Book Award as the Reader’s Choice. Trévien’s most recent publication is the chapbook Brain Fugue (Verve Poetry Press, 2019). She founded Sabotage Reviews and its Saboteur Awards. www.clairetrevien.co.uk