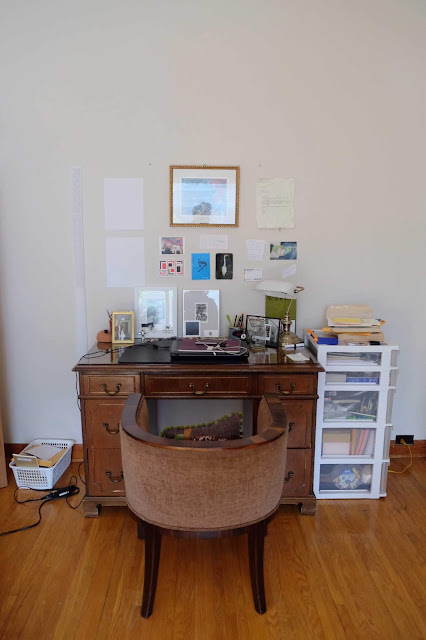 My writing day often starts with reading. I’ll usually get up and read for about an hour or so until my mind starts to drift back to my own work and then I know it’s time to migrate from the couch to the desk.

I was recently given a desk that’s been in my family at least as far back as my grandfather and maybe even my great-grandfather. It’s been pretty meaningful to sit and write there knowing that both my dad and my grandfather have worked here before me, even if they were probably writing letters to their ailing patients or something and I am just scribbling my crazy little poems. The desk is covered in all kinds of strange and inspiring objects I’ve collected including a postcard from the Franz Kafka Museum, a selection of my wife’s rock collection, a photo of a heron in the dead of night that I found on a walk a couple of years ago, a copy of Frank Davey’s beautiful chapbook Weeds and various scraps of paper.

Once I make it to the desk I usually open up the notes section on my phone and start with a little snippet of dialogue or some strange observation I’ve tucked away for later. The other day I heard a teacher yell to a bunch of kids, “If you belong inside, stay inside!” so that went into the phone. I find I get sparked by being out in the world – going for a walk, or generally being in transit. There’s something about being in motion that requires more of my attention. The city bus has been a reliable source of inspiration for me lately – so many different kinds of people in such close quarters, lots of interesting conversations that make for good eavesdropping. David McFadden wrote a lot about the busses in Hamilton and I’m starting to see why.

I’ve also been doing these social media centos recently where I go through my recently-liked tweets, jumble them up and then see what the pile looks like. I’ve been trying to think of social media as not only a waste of time but also as a kind of research. I think there’s a similarity of craft between a good tweet and a good line of poetry and I’ve been using Twitter to try and explore that connection, experimenting with ideas that might end up in my poems later on. Joshua Whitehead wrote somewhere about having a wide understanding of research and that has really stuck with me.

Most days my writing day lasts until I have to go to work. I work part-time these days so I’m usually heading in for noon or one which gives me a good chunk of time in the mornings to get some writing done. Otherwise, if I have the full day off, I usually write until about mid-afternoon and then I find my brain starts to get pretty useless. Time to go for a walk or start making dinner.

And then there are times when I’m out and I can feel that a poem is coming whether I like it or not. When that happens I forget about all of the above and I try to disappear into this really beautiful unselfconscious place I can get to sometimes. It’s a pretty good feeling when that happens but it doesn’t happen that way too often.

Ben Robinson's recent poems include the tale of a man who finds himself lodged in his condominium’s garbage chute, as well as an account of the Christian God’s foray into Spanish lessons. In 2019, The Blasted Tree and Simulacrum Press each published a chapbook of his computer-generated poetry, The Sims in Real Life and Mumbles in Hollywood, California respectively. He has only ever lived in Hamilton, ON, on the traditional territories of the Mississauga and the Haudenosaunee.