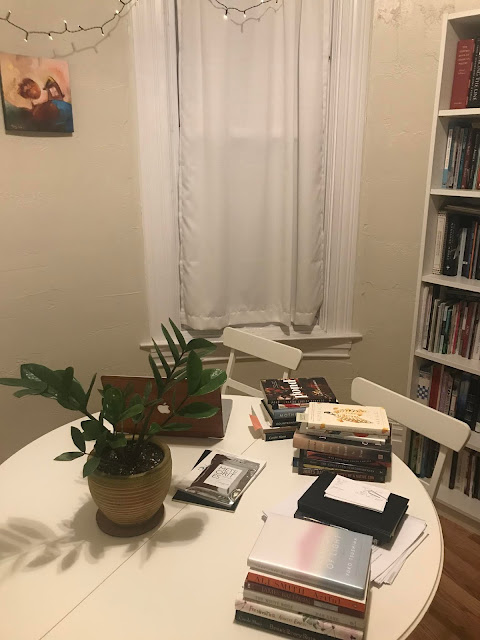 Although they have supposedly moved on to painting the house, the hammering of metal wakes me at 9. I drift in and out, falling asleep during a temporary lull and waking again to a saw, or when something—the hammer?—clangs down the fire escape. It is 9:15. I had hoped it was later. I stay awake. I am groggy, but it is not of the same quality as my waking when the alarm has rung.

This has been a strange year. I gave up battling insomnia by succumbing to it, receiving a teaching schedule that let me rise at 11 more or less without professional repercussions, so long as I worked into the night. Or it was not insomnia, it was an anxiety about spending a day full with people, of receiving emails when I wanted to be thinking, vanishing into art. Rising at 11 and getting to my computer by one created its own kind of panic, one I could feel at the edge of my eyes, that made me wish for blinders, but by 4:30 it was done. Everything had to be handled, mostly, one day at a time.

Then in April the construction began—construction designed, I am sure, to increase my rent astronomically next year, rather than at the small yearly addition my landlord currently attributes to rising municipal water prices. (This is also the reason my rent covers only one utility, water.) The first day the construction started it started at 7:30. I had dozed off finally in what was by then the earliest part of the morning, as episodes of Elementary, filled with Lucy Liu in soft blouses and tailored men's coats, droned from my phone. It was a peculiar feeling, to be exhausted but prevented by an external, sonic force from rectifying the problem. After fifteen minutes I googled Pittsburgh's acceptable construction hours: rudely, they were 7:30a.m.-10pm.

When I first moved in to this first floor apartment with its round turret room I felt exposed. As if someone might walk through the walls, following their snippets of conversation through the window, as they walked to the bar and restaurant next door, onto the couch with me. When I realized the sound which felt like hammering on the walls was, literally, someone hammering on the wall of my room, this feeling came back. The fiction of the private dwelling.

This is a long way of saying that I didn't write anything until 7 p.m. today. And what I did write was not on the schedule. I found myself spending the afternoon in a Midas car repair waiting room, with nothing to read but a book I was supposed to review, a book by a white man whose poems I didn't like and about which this book did not change my mind, but a dislike I couldn't quite seem to justify. I felt, always, that if I just waited long enough for the right mood, I would find the delight. Of course, that time never came. So I wrote the review, and then I started writing this. I had been waiting, similarly, for a day in which I wrote, a day that might stand in for my routine, as if I ever had such a thing.

We might say I wrote my first book under duress, in fits and starts and prompts, searching to find the language to describe how a disavowed genderqueer past nevertheless shaped my longings and desires. We might say I wrote my second out of desperation, a deep reactionary fear that my first book didn't look at all like I thought it would, and that I might never write such a book. Although that desperation looked remarkably like a daily practice—it happened every night, for a month, before bed, while reading; it was curious about the idea of the ordinary, the daily; it is tentatively titled, in part, My Daily Actions—it was structured not by its pattern but its own weird feeling. I have not been able to write in that mode since.

But, I never throw anything away. I tweak absentmindedly, for hours, and don't write for weeks. I like to pretend this happens at the round table in the turret room of my apartment, although, over time, that round room has held more imaginative energy than literal writing. Newer writings appear on my phone, in fragments when I work sitting at the edge of my bed. I make hypothetical table of contents for scraps, when I can't write. I put the poems next to each other sometimes, and see what travels between them. It turns out that it does add up. I would not have believed you if you had said this to me a year ago. But I put seven new poems in a document together and thought, they fit. As I write, I often hear, in my ear, "kill you darlings." But nothing need die—it need only live a bit longer.

S. Brook Corfman is the author of Luxury, Blue Lace, chosen by Richard Siken for the Autumn House Rising Writer Prize, and two chapbooks: the letterpress Meteorites (DoubleCross Press) and the digital collection of performance pieces The Anima (GaussPDF). They are an incoming poetry editor at Pinwheel. Born and raised in Chicago, they now live in a turret in Pittsburgh. @sbrookcorfman & sbrookcorfman.com