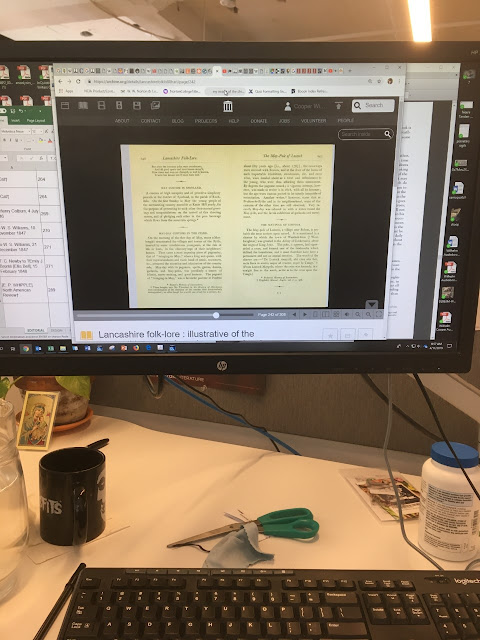 8:51 am I’m trying to get off twitter for a week or two so now everything seems personally relevant. A block from the subway station, the dead pigeon with three red tulips laid on it like it had just finished a performance, picked from a plot a few feet away, could have something to do with a reading I got last week, but it could just be the city reacting to an accident. The train conductor said “shall,” which gives me a strange feeling of optimism. The train car has one of those black star stickers on it that seem to be there for official reasons, but are otherwise inscrutable except that they look like the cover the last album Bowie did before he died.

10:23 am One of the things I have to do at my job today is check the transfer of line breaks from a print book of The Tempest into an ebook of The Tempest. As my eyes do this, I listen to a reading of an Algernon Blackwood story on youtube. The protagonist is worried that he’s having trouble distinguishing between dream and reality: “The hard thoughts never come when my mind is much occupied. But they are always there waiting and, as it were, alive.” Say that aloud a few times, and there isn’t a rhyme exactly, but both sentences end with “I,” the same vowel in “rhyme.” These are the sort of ghost rhymes I feel comfortable using in poems. More direct ones seem too much like Wordsworth or limericks, too self-serious or too obviously a joke. Not that jokes in poems aren’t fine. They’re great. Poetry and stand-up have more in common than not sometimes.

10:37 am My browser currently has 59 tabs open, not including the one in which I’m writing this. Here are three:

-The Wikipedia article for the Thematic Apperception Test, which is something I heard about in a Michael Crichton novel I was listening to on youtube.

-A recipe for Møsbrømlefse that I may never make

-The FindAGrave page for a crossroads burial in Warren County, New Jersey.

12:47 pm (or thereabouts) On my lunch break I take the train downtown to where I have a PO Box and on the way back up I start revising a poem. When I first started working on this poem, I was thinking about the idea of listening to a band I found out about on the poet Ruth Awad’s instagram story called Mashrou’ Leila. I had been crossing under the East River at the time (this was maybe a week ago) and also fixating on something I’d learned earlier that day. In trying to figure out how common crossroad burials are in the US (they were banned in the UK in the 1820s) I learned that the massive strip of cemeteries on the Queens–Brooklyn border had 1) been made possible by the Rural Cemetery Act of 1847, and 2) had resulted in the dead population of Brooklyn being greater than the living one.

Revising the poem now is turning into a major reworking centering on considerations of the reality of ghosts. I’ve certainly used the metaphor of ghosts a lot, and there’s a part of me that’s believed in them enough to sometimes wake up in the middle of the night very afraid, but this poem seems to be a way of interrogating the possibility of capital-b Belief in ghosts and the dead being more alive than simply metaphor and memory.

4:06 pm I take a short break from the work I’m doing on The Tempest to fiddle with a poem, a different poem. I like where it’s going, this poem, but I’ve been fixating on mycology and think maybe that could play a role. A used mycology textbook from 1984 sits next to my work computer almost completely unread. Its time will come soon I hope.

5:30 pm still at work, I am copying the Latin for a recipe from an image of a book from the 1500s for a nonfiction piece I’m working on. The recipe is for holy water.

Cooper Wilhelm is a communist, and a witch, and the author of three books of poetry, the longest of which is DUMBHEART/STUPIDFACE (Siren Songs / 2017). More at CooperWilhelm.com and on twitter @CooperWilhelm.