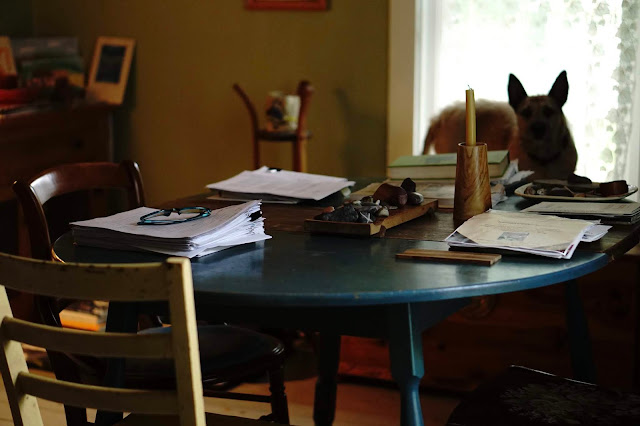 In a 1,000 square-foot farmhouse built by Norwegian settlers in 1900 on  Winnebago land. A river runs underground, we’re told. We moved here in 1999 and planted the orchard, tree by tree.

The house has few windows (because of the Early American “window tax” and cold winters). Not many windows and not many rooms; therefore, no particular room to work in for 19 years. Of course I’d read Woolf, but without imagining that one could be helped, in a practical way, by claiming a room of one’s own. As if because Woolf figured out that necessity, because she so brilliantly made the case for it, because she wrote what she wrote, one needn’t actually go on to find such a space. The point was the critique: to have made the argument for the necessity of doing so, and Woolf had done that.

And so, to work at home (rather than on the bus or train or outside with a notebook), was to work wherever wasn’t in the way at that moment. The most I might hope for was a few hours––in whichever room, on whatever surface wasn’t needed for other purposes (eating breakfast/lunch/dinner, shelling beans, playing Scrabble, etc.). Inevitably, I’d end up removing all my papers and notebooks and stacking them unobtrusively in a corner until another space opened up. Then I’d start over, spreading everything out again until it had to be cleaned up and put away.

It’s probably obvious that I write on paper only, in pencil preferably, until it’s absolutely necessary to shift to the computer when a thing is “done.”

Three years ago, after the publication of 24 Pages and other poems (which went from paper to manual typewriter only, until the publisher took over), I realized I wanted to deal with dozens of notebooks and piles of looseleaf and see what was there. I wanted to type everything and take seriously Viktor Shklovsky’s notion of writing as arrangement, to see how writing that spanned 16 years and was in many cases notational, fragmentary, prosaic, diaristic, observational, might occupy the same space (since it was all from the same life), a space just as subject to change and variability (in form, tone, subject, stance) as a life is. Ultimately, that material became the long book that will come out next August (Mad World, Mad Kings, Mad Composition). It spans the time between 2003, a year before James was born, and 2019. But it’s not in chronological or any kind of order. What is?

To make the book––to gather the writing, type, arrange, re-write, edit, rearrange, and write newly alongside, all of which took over two years––I realized I had to be able to keep all my stuff out: piles of papers, dozens of notebooks of all different sizes and shapes, drawings, scraps, books, poetry journals, maps, everything that had anything to do with what was emerging. I had to be able to leave it out overnight or a week or a month––indeed, indefinitely––and come back to it just as I’d left it. I had to be able to not keep starting over.

So I claimed one of the three rooms on the main floor. Its two narrow windows face south (a hickory tree) and west (a giant white pine and beyond that, the barn). The room has been used as a bedroom, a spill-over living room, a nursery (for starting plants) and for the past several years, a dining room. The formality of that term is misleading. The oval-shaped blue table came from an alley in Chicago. The pine-and-plywood “pantry,” from a dumpster on the border of Illinois and Wisconsin. The cedar trunk and the cabinet with tin doors were made by my woodworker father from Montréal. From a garage sale here in Orfordville (pop. 1300) came the round braided rug under the blue table. Really nothing in the house has been acquired new, only scavenged, “picked,” given, found. That seems related to my writing, even when I’m not working with found language or appropriation. Echo, allusion, and the sensation of poems as cadence, music, ways of moving all give the lie to what’s “new,” at the same time as never having existed before, just so, at any moment. 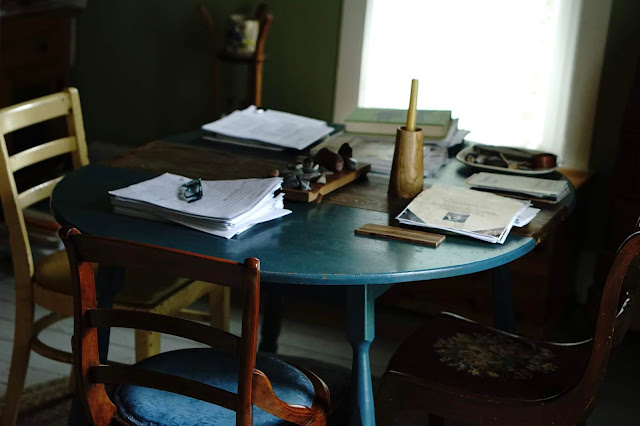 We have a big vat of vinegar fermenting about three feet from where I sit––cider from our apples, in continuous fermentation, to be sold at the farmer’s market as “live ACV” alongside fresh cider and the 100 or so varieties of apples (at different times). So the room still functions in a few different ways; it’s also where the only closet in the house is. The room itself has no door, and people come in and out to get things from the pantry or cabinet or closet. It’s also where the dog sleeps, on the cedar trunk under the window that faces the hickory.

Nonetheless: I have a space to work, if not a room exclusively my own. We now eat only in the kitchen at my great-grandmother’s table in the center of that room, and I work in this room, at the blue table. The piles of stuff on top of it and on the floor all around it never have to be packed up and put away. The wooden board with rocks from the harbor in Main-à-Dieu (Cape Breton, Nova Scotia) never has to be emptied, ditto the plate with rocks from the Driftless region in Wisconsin (where the glaciers haven’t been, yet). The stones help me work. They are restful to look at and periodically to pick up and hold.

So much of writing is not writing, just waiting. Pick up a stone and wait for a word?

I have been talking mostly about the space and not the process of working, not a record of a day. It must first feel necessary for me to place myself. As if that, itself, is a huge part of the process: being placed, knowing where one is. I am aware of the luxury of that, the privilege of doing so, and that it is far from universally possible.

What is most helpful of all about working here is that we can’t connect to the internet. It is not possible to check e-mail or to look anything up. A cell signal may be picked up at the far end of the orchard by the woods––because of the network of mushrooms facilitating communication in any form, I believe––but it’s a longish walk over a hill, easily avoided. Or you can drive a mile to a gas station with internet, if you want to sit with your laptop in the car.

If today is to be a work day, it will include: the coffee I’ve already drunk and the dandelion root tea I’m presently drinking. Looking up every few minutes at the Nova Scotia rocks on the table or out the window. Lots of looking out the window. Taking the dog through the orchard shortly, saying hello to Henry and James who are tying grapes today, I believe. After a couple of hours I’ll shift to the living room, or outside under the white pine, for a break with a novel. That has always been part of my process, wherever I am. Right now it’s Elizabeth Taylor’s first book, At Mrs. Lippincote’s. On most excellent days, anything by Iris Murdoch or Elizabeth Bowen except her last few. I read more novels than poetry. I even read more short stories than poetry and, to be fatally honest, even more bottom-of-the-barrel mysteries. Probably not “more” in the largest sense, but on a more daily basis.

I would like today to include responding to Martin Corless-Smith’s review of Alan Halsey’s The Text of Shelley’s Death. I will try not to get distracted by the tattered paper atlas to study the distance between Thunder Bay and southern Wisconsin.

The work today may include some endless fine-tuning of “Kasm of Arachny,” a long sequence of poems in play, partly, with Shelley’s Mask of Anarchy. And/or the manuscript of stories I’ve been working on for a year, some fabulist or fairytale-like, others not. Those are what I’m most excited about right now because it’s like going to the moon each time. Sentences! Characters! Paragraphs!

Finally, the day will end with a trip into town (officially a “village”) for June Days. At the pancake breakfast this morning to benefit the library, we saw the rides being set up. We don’t go on the rides, but we’ll walk around before the band starts. One year Henry won a picture of a tiger for James, I think at the softball-throwing booth. One year James won a goldfish and it died two days later. We buried it under the medlar tree and wrote a letter of complaint as a way of dealing with a five-year-old’s grief.

Because I live in two and a half places (here at the farm in Orfordville, part of a house in Madison, and part of an apartment in Chicago), there is no typical work day. But the blue table offers the most consistent space and sense of a work-space, and it represents my breakthrough into conceiving of such a space. Here it is (see accompanying photo), on the fifteenth of June, 2019, just before toast with Henry and James in the adjacent room, the kitchen. Right now they are talking about a strange mushroom they found out back and paging through Mushrooms and Other Fungi to see if it’s poisonous. Plants of all kinds come in and out of the day here, and therefore are part of the work.

Lisa Fishman’s most recent books are 24 Pages and other poems (Wave Books, 2015) and F L O W E R  C A R T (Ahsahta Press, 2011); her seventh collection––Mad World, Mad Kings, Mad Composition––is forthcoming (Wave, 2020). She is currently working on short stories and on a new poetry ms. (“Kasm of Arachny”) in play with Shelley’s “Mask of Anarchy.” She is dual (dislikes the word citizen), with plans to return to Canada.