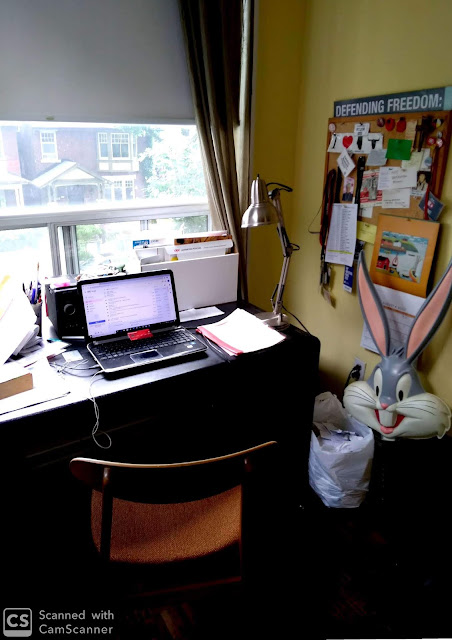 10:30 a.m. Peter, my spin instructor, pats down his cycling shorts. I can’t help but watch. I don’t know what he expects to find in his spandex. Then he rummages around his gym bag. Seven of us are leisurely pedalling, waiting for an opening tune. Peter stands and rubs his jaw. I catch his glance, and he comes over to me.
“Do you have any music on your phone?”
“Yeah, but. I’m not sure if it’s --
“Great, thanks.”
He takes my phone and plugs it into the sound system.
I’m feeling embarrassed about my tunes. What do they say about me? What if no one likes them? What if people think I’m a freak, or worse, a relic?
I never realized how much Kraftwerk I have on my phone. A preponderance of electronia.
Man/Machine.
After the class, a spinner compliments me on my playlist. He’s German, though.

1 p.m. I put my earbuds in and go to my favourites. BBC Radio 3. Lunchtime Concerts is usually reliable, nothing too atonal, usually chamber music. Debussy. Schumann. Or sometimes I’ll go for In Performance, and full on orchestration. Bach for a brain massage. Beethoven for edification. Mozart for flight. The BBC hosts are ideal companions – disembodied. They are on a frequency other than the voices in my head. 8-track is not dead; it runs between my ears. I need this sound fortress.

1:10 p.m. How is imagination expansive and contained at the same time? I should ask a physicist, or Thomas Pynchon. Does he have an email address? Is he still alive? I wonder what William Shatner is up to these days?  He’s not dead. Abe Vigoda is, finally. I hope the conspiracy theorists are happy.

1:20 p.m. At the refrigerator, rummaging for sustenance. I stand and rub my jaw. Should I ask my neighbour if she has any food in her fridge?

1:35 pm: The act of writing is antisocial. The final product is another matter. Isn’t it?

11:30 p.m: Without spin class and Peter ramping up my internal generator to pump through the blood-brain barrier, I would not have had quite as good a day in my mind. A subterranean world needs to be fed with things other than daily life and CBC News.

3:50 a.m: I’m frightened about the release of my debut novel. What does it say about me? What if no one likes it? What if people think I’m a freak, or worse, an interloper? Help me, Abe Vigoda.

Writer, playwright and comedian Carolyn Bennett cut her teeth performing at Yuk Yuks and hasn't stopped bleeding since. Selected TV credits include This Hour Has 22 Minutes, CBC COMICS and Chilly Beach. Produced plays include Mixed Media (CBC Radio) Pure Convenience (CBC Radio), Runtkiller, The Short List, Hitler's Ass, Canis Familiaris, and Sick Kids Wanna Talk To You. She wrote and performed in the solo show Double Down Helix at the 2018 Kingston Storefront Theatre Festival. She won the 2013 TIFF Studio Screenwriting Intensive Jury Prize for her feature comedy The Mac and Watson Springtime Reeferendum Show. Bennett was part of the 2017 Thousand Islands Playhouse Playwrights' Unit where she developed the play The Monarchists.

Bennett has worked as a senior writer for government, and enjoys sharing the same name of a prominent federal cabinet minister.

She co-produces a monthly comedy show at Hirut Fine Ethiopian Cuisine, now it its seventh year. This year, she took on the task of producing Bright Lit, Big City, a new bi-monthly literary reading series at Hirut.

Please Stand By is her first novel.