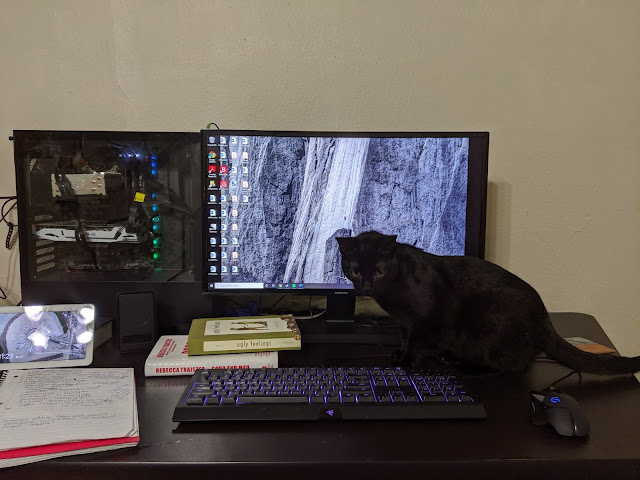 As I approach the age of thirty, I’ve begun the expected ruminations and analyses of the last decade of my life. One epiphany I had recently: I’ve written almost every week day, Monday to Friday, throughout my twenties. It sounds shocking and yet—it’s true. This detail jumps out nicely from all the other inconsistencies.

After ten years, you’d think I’d have my writing process down to an exact science. In truth, aside from choosing to write with my freshest mind—which means in my earliest, brightest moments in the morning— little elements of my writing routine have remained consistent. But as I look back at my writing process over the last decade, one consistent theme is my dependence on technology.

My writing day usually begins by browsing through digital notepads: Facebook messages I send to myself, Twitter messages I send to myself, texts I send to myself. They all have a list of ideas, conveniently (automatically) dated for easy organization. Usually, I work through my ideas and inspirations for my current project in this space (I am really a project artist: I tend to obsessively focus on one project at a time). Though, I also record spontaneous things: aspirations for future projects, links to essays I want might to revisit later, etc.

Technology makes my writing day convenient; it allows me to log my notes with relative ease. According to Joan Didion, who wrote about the difference between the writer and the non-writer in her book, The Year of Magical Thinking, this is the defining quality of creative writers: the writer transcribes their ideas physically; the non-writer merely has the idea, and lets it pass before expressing it on the page. Technology has transformed my writing process by simplifying the act of expression. I am rarely without my phone, and if I’m without my phone, there’s a good chance I’m either near someone who does or I’m at my laptop.  I don’t need to keep flashcards in the pocket of my blazer or lug around a notebook. If I need to reflect on the project I’m working on, I only need to open a web browser, or look down at my cell phone.

I am also dependent on technology for inspiration. It is an inefficient way to conduct research, but then again, it has benefits. My method for collecting data is simple: I simply scroll and scroll, through my Twitter feed and my Facebook feed. I browse the internet to get an idea of what and how people are thinking and feeling, what they are talking about. This is how, or one way at least, the internet has changed the daily lives of writers. The complicated world, all its information and thoughts, is now within reach by our computer mouse. This sounds like hyperbole, but I don’t think it is. Today people, both writers and ordinary folk, have more access to information—as well as private thoughts and sentiments of individuals—than ever before.  So, the art we make should be more profound, simply because we have more data.

My writing day begins by waking and skimming various posts on random topics; most of what I ingest is useless, but every now and then, I will read something totally brilliant or totally radical, which will upend the way I think. These moments of understanding—and deeper comprehension of the world I live in—are vital for my process, for I need to understand the world to write about it well (in my opinion).  I also extrapolate an embarrassing amount of information/ understanding from watching television or documentaries. I have admittedly learned a lot about plot and world-building from HBO series and movies.

In general. I start writing as soon as I wake up. (It is impossible for me to write any other time of day. I have gone through great pains to preserve this time of the day, saying no to jobs I probably would’ve been good at. For me, it is imperative to write while my mind is fresh, and still a little sleepy.) I rotate between a desktop computer (which I like to imagine is a sort of supercomputer) and my Macbook laptop, which is sadly on its last legs. In the morning I write with coffee. I try to write like I am dreaming, try to refrain from having too much control on the words or ideas as they flow out. It helps me avoid tricky situations like writer’s block; I spin webs like the subconscious mind creates in a dream: rather loosely. I don’t always understand where I am going, but I do figure it out. I trust myself to figure it out.

These days, I write with a kitten on my lap. He is a recent addition to my process. Unfortunately, I don’t have a choice: he insists on sitting with me while I write; fortunately, he has turned out to be a trusty wingman. Most of the time, he is not a distraction.

I have spent years telling people I am a poet. The work I produce says I am more accurately a hybridist, an occasional poet, sometimes an experimental fiction writer. Similarly, I have for years been telling people I am a writer…. when really I just obsessively browse through social media, take notes on my iphone, and watch television at night. I do string words into coherent sentences. But you could argue my life as a writer is not so different from the life of the nonwriter. Yet I am able to grow as an artist, all thanks to the access and ease that technology has granted me.

Vanessa Saunders studied creative writing at San Francisco State University and the University of East Anglia for her undergraduate degree. She received her MFA from LSU, and now teaches writing at Loyola University, New Orleans. Originally from the San Francisco Bay Area, her poetry has been published or is forthcoming from PANK, Nat. Brut, Poor Claudia, Entropy, Stockholm Literary Review, Heavy Feather Review, and other journals. Recently her manuscript, The Flat Woman, was longlisted for the Tarpaulin Sky Press Book Award. The Flat Woman, a cross-genre manuscript, is a seminfinalist in another contest whose details she cannot presently release. This winter, she is teaching an online intro to cw/ writing hybridity class with Writing Workshops Dallas.