Carla Hartsfield : From piano to chair to studio and back again: my (small press) writing day 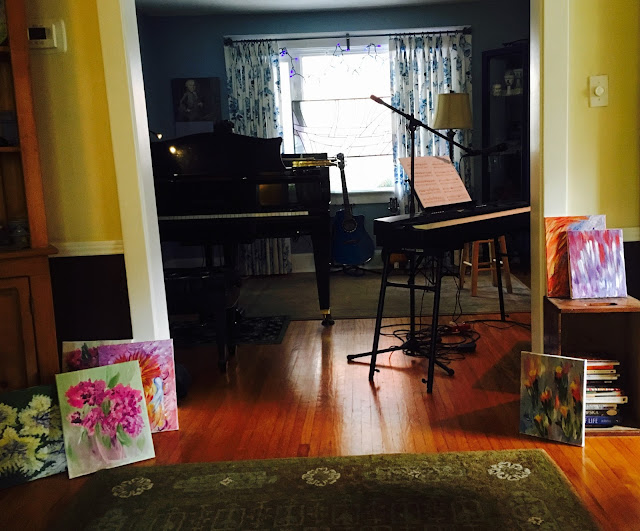 In 1982 I left Texas and immigrated to Canada. During the packing process, I thought it was important to secure a sheaf of poems titled "Edith" inside my carry-on suitcase, for fear the poems would be lost in some unmarked box, or confiscated by immigration when I crossed at Windsor. In the back of a U-Haul trailer the poems rode alongside clothes, dishes and one of the first IBM computers designed and built by Texas Instruments. Also in that suitcase, The Complete Beethoven sonatas, volumes I and II of Bach's Well-Tempered Clavier, and cassettes of Glenn Gould's live performances recorded from PBS broadcasts. As I made a habit of recording piano pieces I was polishing, once I began writing poetry, I did the same thing - reading earnestly into a recorder, something I still do today (only I've become a fan of Voice Memos on my iPhone). It's funny that I lost track of that early poetry cassette but not the poems, as the tape was labeled incorrectly. By the time I found it and listened, the poems had changed dramatically, as had my thick Texas accent.
Right before the move to Canada and finishing up a graduate degree in piano performance, I took a creative writing course with poet and National Book Award winner, Albert Goldbarth. The poem sequence I protected crossing at Windsor was composed in Goldbarth's class; it was about Edith Holden, a naturalist and Victorian watercolourist who fell into the Thames and drowned. Tragic figures were always and continue to be, of interest to me. I still have no idea why I began to write poetry, but that whole series eventually appeared in Poetry Canada Review early on in my career.
In those days, becoming an inter-disciplinary artist wasn't the usual. I thought I would have to quit playing the piano to be a dedicated poet. But, within six months I noticed that the less I practiced piano, the less I wrote. My two chosen art forms were intertwined from the beginning. And still, after three decades of publishing in Canada, I rarely write without going to the piano first. Or, after a stringent day of editing or writing new, I head to the piano (or more recently, pick up my guitar) to relax, mull, tweak an idea or jot down new song lyrics. Others take walks to loosen up and change focus. Me? I need instruments close by and, my enclosed sun porch cum art studio, where I paint - the ultimate unwind after both brain hemispheres have gotten thoroughly rung out.
I don't formally "write" every day but journal regularly, and have several notebooks going at once. But, no matter how hard I try to keep "new poems", "daily tidbits", "rants about Life", "reminders/bill payments", "important phone numbers/passwords" all separate (yes, I still believe in writing everything down in longhand), eventually each journal turns into a hodgepodge of ME; so at any given moment I must have a stack of current bound journals at my fingertips - because they "contain THAT ME" like an Egyptian canopic jar made out of paper. My journaling process might sound chaotic, but hey, if it ain't broke - don't worry; plus, this method has kept me creating through divorce, numerous moves, raising two children, making pencil drawings on trains while recording a new album, or showing up at doctor/dentist appointments on time. And I can always peruse whatever I'm working on while languishing in the waiting room via The Notebook.
Except when I'm painting, silence is absolute key. I'm a recent convert to Sirius XM radio, so it's fine for those programs to blast away at all hours of the night - the only time I tend to paint. But typically, poems come early in the day, so when I rise, I make coffee in a manual espresso pot, eat fruit with yogurt and granola, then settle into my chair to write in the living room. My grand piano and keyboard, as well as hand-stained crates full of music take up all of my dining room, along with an autoharp, mandolin and two guitars. The table where I eat or entertain is shoved against one wall in the adjoining room, my writing chair in a sunny alcove, and a small couch across from the table. After working on a poem for an hour or so, I head to the piano to see if any new melodies or lyrics pop into my head. Or I practice classical pieces. Currently I'm learning Bach's French Suite No. 5 in G, a smattering of Scarlatti sonatas, Balakirev's "The Lark" - and I find Philip Glass's film score of The Hours arranged for piano, terrific for technique. 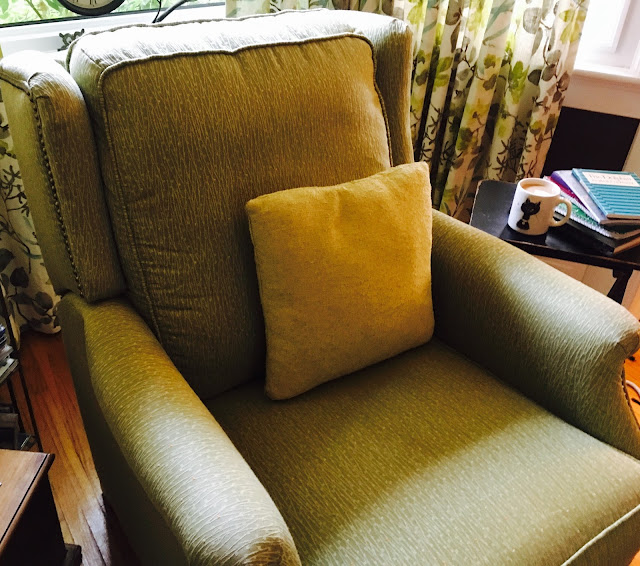 Traditionally, mornings are for writing and piano. In the afternoon I head to my fitness club and bike or take in an aerobics class, grudgingly. But, once I'm there (an average of three times a week), I feel more energetic and ready to come home and cook, tackle music memorization, put longhand versions of poems into a Word file (I weirdly write more with pencil than pen), or editing. I don't paint every day, either, but when I do, the paintings seem to sprout like the overgrown hydrangea and rose bushes in my garden. Right now there are a dozen canvases at various stages of completion grouped on the floor of my living room, as well as more in my upstairs office.
This routine changes, of course, if I have a show. Some nights are for rehearsal; the bigger the show, the more focus on performance. And I still teach piano at home. But, after an evening onstage, or an action-packed day of students, there's nothing better than retreating to my chair to ruminate and read. I have resorted to loading books onto a tablet because of the amount of travel I do as an RCM piano examiner. At the moment I'm in a Robert Lowell phase - and reading Kay Redfield Jamison's Setting the River On Fire: A Study of Genius, Mania and Character. Which prompted me to hunt down a 1974 copy of Lowell's The Dolphin. I've been gleaning quatrains from that collection as well as his Imitations to create glosas, a new and exciting poetic form I'm working with. Other recent inspirations for glosas have come from Anne Carson, Anne Sexton and Sylvia Plath.
When I mentioned earlier I had no idea why I became a poet, that's less important than trusting instinct and running with it. Today, because I reversed my usual order and wrote all afternoon, I now have a makeup lesson to teach, gosh darn - didn't make it to the fitness club. The system still ain't broke - it's awesome, because there's at least two hodgepodge notebooks gleaming up at me with unfinished song lyrics. I'll be back at the piano soon enough.

Carla Hartsfield is a classically trained pianist, singer-songwriter, poet and recording artist. In 2016 her album of original songs titled Just Once Forever (www.carlahartsfield.band) was released as well as her latest chapbook Little Hearts (Rubicon Press). Carla has published two major poetry collections with Vehicule Press and one with Brick Books. Her fourth collection seeking a publishing home is titled Heart Brake.