Karen Smythe : My Writing Day, or “Ode to a Shed” 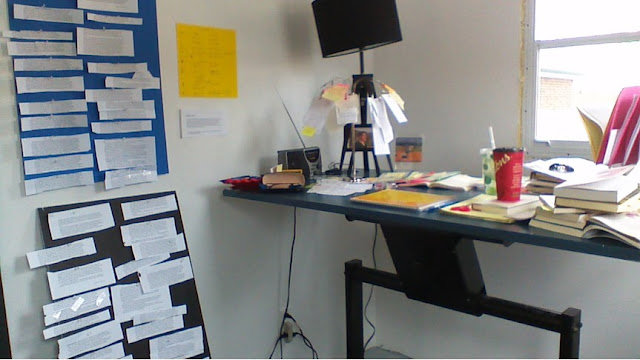 To those who wake up and start writing at the crack of dawn, I salute you. When I get up, usually between 9:00 and 10:00 am, I need two cups of strongly caffeinated fluid and at least two hours to review the morning news, respond to emails, and spend quality time with my nearly nineteen-year-old cat (I catch her between naps—she loves to sleep as much as I do). After a workout at the gym (well, not every day, but most), I’ll check in with my parents (dad is nearly 90; mom, 85) or visit my mother-in-law (she is only 81), and then run errands and/or drive them wherever they need to go.

Though I am caregiving for much of each day, of late, I do make mental notes for my work as I go, jotting them down on small pieces of paper and shoving them into my purse for sorting when I arrive at my writing shed. By then it is usually between 3:00 and 4:00 pm, but when I close the door behind me, I’m flooded with a sense of well being and can easily spend two to six hours at a time working. 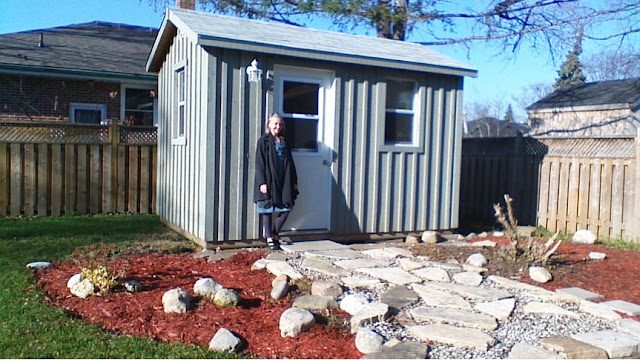 Before I sunk any money into a shed (insulated, wired for heat), I tried renting a single room in an office building; it was very cheap, because it had no windows. The office next to mine was soon rented to a bill collector who yelled at people on the phone all day long, and though I heard some potentially interesting stories through the wall, they were not worth the sacrifice of my solitude.

At home, my husband—also a writer, but one with far fewer requirements for his working conditions—could never seem to resist knocking on the door of a room I claimed in the basement, to ask if I needed more tea, or a snack. (I know, I know—you should be so lucky!). While I can work on freelance editing projects in that space, I cannot lose myself enough to write fiction there. And so the 8 x 10 wooden structure came to be built.

On the large, old architect’s table I use as a standing desk, I wrote drafts of my first novel here. The walls are now covered with ideas and plans and outlines that will eventually become my next book. Unlike the purchase of that home exercise equipment, which seemed like a good idea at the time, my writing shed has already earned its keep. (By the way, if anyone’s interested in a barely used treadmill….)

Karen Smythe is a Guelph-based writer. Born in Winnipeg and raised in Toronto, she has lived in six Canadian provinces (and considers herself a Maritimer at heart). With a PhD from the University of Toronto, Karen has worked as a university professor and registrar, an editor of fiction and non-fiction, and a senior policy analyst, but now writes full-time. In 2015 she received a Letter of Distinction from the Director of Humber College’s Creative Writing Correspondence Program, earned under the mentorship of Diane Schoemperlen. Karen’s first novel, This Side of Sad, was published by Goose Lane Editions in September 2017. Her second novel is underway.
at November 03, 2017