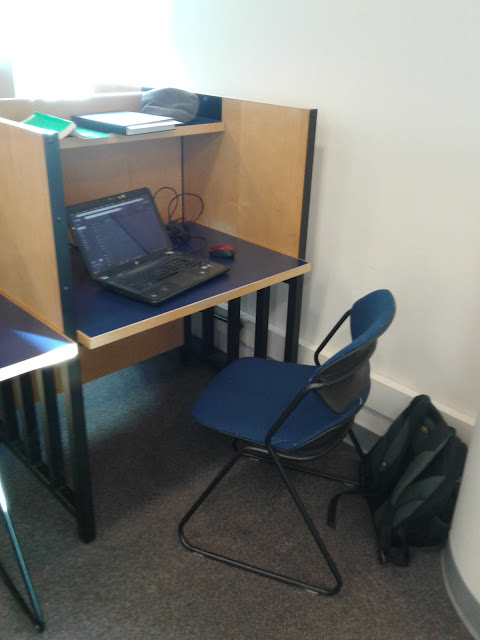 As many times as my writing day has shifted over the years, the kind of writing I am able to complete has shifted with it.

My grandmother, an elementary school teacher, teaches me to read and write at the age of 4. We create storyboards, flashcards, and little books.

In Kindergarten, I notice Mrs. Moseley write the date on the board—September 23rd, 1987. I write what she tells me to write on worksheets. Later, they give me a notebook to write my thoughts in, and I fill it with drawings of flags.

With money from my paper route, I buy myself an electric guitar and a notebook so that I can write songs like Kurt Cobain. The notebook is hardbound, red and black, with lined pages.

I rarely attend high school, except to hang out with members of my heavy metal band. We consider the band very avant-garde, influenced as it is by No Wave and the Velvet Underground. I hide in the school library while I skip class, reading Colin Wilson and writing songs in my journal.

While housesitting at my Grandparents’ house, remotely located on Hoodoo Lakes, I begin writing a new daily journal on lined school paper in a yellow duo-tang. The habit sticks.

I start writing undergraduate essays. I add writing poems to my songwriting activities after taking a class with Barry McKinnon.

I start dating a young woman named Erin Arding. She has a big, black hardbound journal with unlined pages which she writes and draws in every day, habits she picked up while studying at Emily Carr. I go out and immediately buy a book just like Erin’s, writing poems, songs, and ideas in it every day, walking around with a camera and taking pictures, hanging out in cafés. I’m in creative writing classes with Stan Chung.

I defend my English/Creative Writing/Theory MA Thesis at the University of Northern British Columbia. My supervisor is Robert Budde. (I still haven’t found a publisher for this book.) Having already published a collection of poems with Caitlin Press the preceding year, I now have ample time to write several collections of poetry which go essentially nowhere. I start tinkering with an idea for a novel.

I start working full-time at Theatre North West as the Marketing and Development Officer, writing various kinds of sponsorship and advertising communications. I continue to write poetry in the margins of my day.

Following the birth of my son, I wake at 6:00 am every day and write until 8:00 am when I start getting ready to go to work at the theatre. In this manner, I write 50,000 words on a novel draft, which I then set aside to work on some poems I think of as “Hidden City.”

Hidden City wins the Robert Kroetsch Award for Innovative Poetry and is published by Invisible Publishing. I write a line here and a line there. I become the General Manager of the Prince George Symphony Orchestra and found a music school.

I put the finishing touches on another 50,000 words of the novel draft, which is now called Easter Wings. In the meantime, I’ve put together a half a dozen more collections of poems. I still try to get up at 6:00 am but it doesn’t happen that often. At the end of the year, my daughter is born and I leave the orchestra.

The music school fails. I remain unemployed. When Erin is recovered enough to want to return to work, we work out an arrangement by which I spend a certain number of hours a week working on writing and she spends a certain number working at her job. (She also has a few in which to write songs.) I mainly write Mondays and Fridays while our son is in school. I’m working on the draft of a novel about Sancho Panza’s donkey in Hell. I also continue to write poems, catch as catch can.

Writing comes for me in a line here or there, or even just a word that strike me as appealing, at different points in my day, which I record in my book (I also have a small book for walking around). I still buy the big, black books Erin also favours. The other writing I do is in those three-hour blocks that Erin so graciously saves for me. I can’t imagine what it would be like to write with children, but without a supportive partner. I can imagine that it would be very hard. But I also really value the three-hour block as a unit of attention, recognizing that they are a privilege bought by another writer’s labour (which I gratefully reciprocate). In any case, I believe it’s absolutely possible to write work of great value, even without any focus or attention per se. It’s good to distrust whatever rules and habits we come up with, and most likely life will shake them out of us, anyway.

Erin and I sold our house, the house where our children were born in the living room. We are leaving my hometown in January on what we’re calling a “sabbatical” in Europe and we don’t know if we’ll ever come back. While we’re there, we intend to spend a lot of time writing and a lot of time wrestling very active children. After that, who knows.

Jeremy Stewart is an award-winning musician, writer, and impresario from Prince George, British Columbia. His work is about transformation of haunted places, time and friendship, the noise of thought, documentation and the unfolding mystery. Stewart won the 2014 Robert Kroetsch Award for Innovative Poetry for Hidden City (Snare Books/Invisible Publishing). He is also the author of (flood basement (Caitlin Press 2009). His work has appeared in Geist, Lemon Hound, Open Letter, and elsewhere. He once dropped a piano off a building.
at December 07, 2017