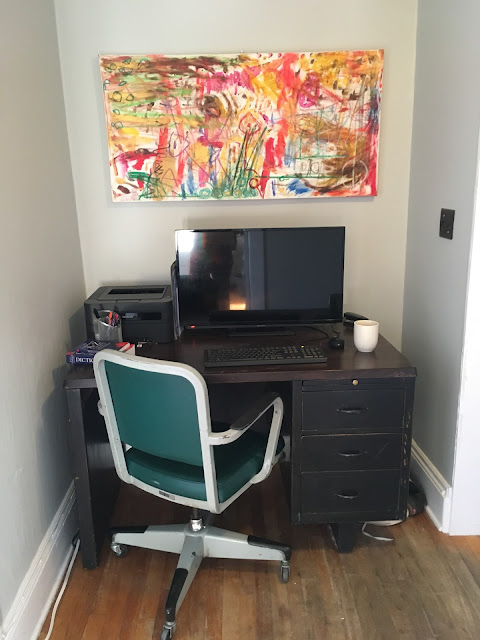 I usually work a 7 hour day doing freelance publicity work, which includes pitching festivals, writing event and award releases, responding to emails, designing event posters, organizing review copy mail outs, doing follow-ups for media and other top secret book PR tasks which are part of my vocational quest for greatness. I used to do this from an office in the woods in BC, but we moved a couple of months ago to Fredericton.

Since I work almost exclusively in the small press vat, and my job description includes a lot of writing; my whole day could be described as a small press writing day. I suspect this is what you are getting at rob mclennan, as you framed this interview / essay series.

I’ll try to get there as cohesively as possible.

My writing days orbits around domestic virtue, deadlines, bills, weather and other assorted distractions. But one recent writing day could be patched together into a comprehensive look at a not so typical example of my creative habits.

In the afternoon during the week, I pick up my daughter from school and she usually has a friend with her to raid our fridge. The friend vanishes and I make dinner.

But a recent and long overdue trip to Montreal proffered a unique version of my small press writing day, in the most delightful way. 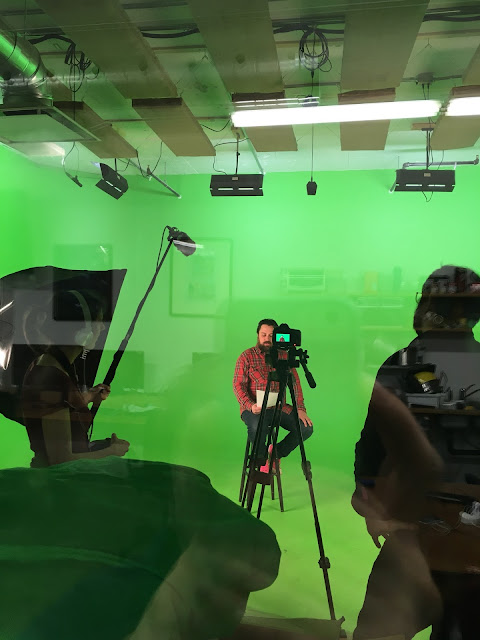 My friend Vitalyi Bulychev and I worked on a short film which we had organize and shoot quite quickly and with a very small cast. (This film is about Catullus and I play the part of Calvus, Catullus’s best friend.) It’s in support of a new book of poetry (Goodbye Horses) I have coming out with Mansfield Press in the spring. We shot the film in three hours at a green screen studio, and to give you a quick summary: Catullus hears music, plays music, complains about his life to a series of friends, myself (Calvus) included. There is also a scene where a group of people simultaneously read Catullus’ poetry (which is my poetry) in an almost cult-like chant. In another scene, Catullus is approached by a fan in a graveyard who wants to talk to him about his poetry. It was fun to write a small script for this, because I’m also writing a novel about Catullus, called Transcripts of a Roman Séance, to complete what I am calling The Original Catullus Trilogy, starting with the now out-of-print, Let’s Pretend We Never Met (Pedlar, 2007). A lot of the same characters are in Goodbye Horses and the novel, so it was fun to workshop these relationships in the short film. This was my favourite writing day in recent memory, because it involved an intertexual workshop, costumes and short hand storyboarding, plus on the fly directing and a crash course in Catullus for the cast and crew of 8.

In my regular strength life, when I’m not doing my freelance contract work, I pick away at reading fiction and poetry and doing research on Roman societal mores, food habits, sexual habits, and spend hours doing math and studying maps, attempting to get a realistic sense of how long it took to travel by cart from one Roman city to another. I also try to stay current with all the new releases from other presses, and when I can, interview authors or write small reviews, something I’ve been doing for nearly twenty years—something unfortunately which simply doesn’t pay enough to maintain in my current lifestyle, which includes continuous financial invasions.

I tend to have stacks of books and notebooks stuffed in drawers and backpacks all over the house so if I find myself alone for a spell, I can pick up where I last left off. I usually have a manuscript that I’m constantly marking up and adding things to along the margins as a cat will claw at it, urging me to make it better. It’s a rapid fire way of writing and progressing; a battle against one’s self importance. Your kids and family have to come first, your highly-in-demand works on Catullus, second.


Nathaniel G. Moore is the author of a few books including Savage, winner of the 2014 ReLit Award. His next book Goodbye Horses, will be out with Mansfield Press in the spring of 2018. He currently lives and works in Fredericton, New Brunswick with his wife and daughter and some cats.