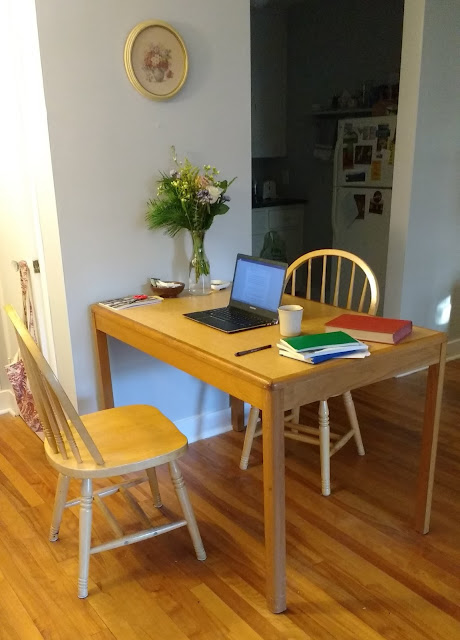 These days I make a living as a part-time professor and writing tutor. As a result, I tend to write in the corners of my day – in my apartment, on public transit, in cafés, before and after classes or shifts, when I’m waiting for a friend or phone call, and when I’ve actually set aside time to write. Writing for me doesn’t always look like what I want it to, but I am grateful for the time and space I do have.

Currently the resident of a small bachelor apartment in Halifax’s South End, I am fortunate to have the central branch of the public library nearby: the lighting is good, and there are five floors of books available when I need a distraction, not to mention lots of people watching. This fall, I’ve also enjoyed writing outside in the company of Halifax’s chatty starlings, with, again, lots of good light. Ultimately, though, I get most of my writing done at the utilitarian table I bought at Value Village, which is located in the dining/work area of my apartment.

Ideally, I start my poems in my scratchy, often illegible (even to me!) longhand in notebooks. I favour the Moleskin Volant Journals, which are resilient yet slim, in which I’ll write out a poem over and over until I have a draft I’m happy with. It’s not uncommon for me to go through six or seven versions of a poem within an hour of starting it, before transferring the working draft to a doc on my waning five-year-old laptop. I also date all the drafts or fragments in my notebook, not that I’ve ever gone back to look at these dates.

Another quirk of mine – I much prefer to write my drafts in black ink. That being said, I will write with whatever I have available – desktop computers at the library, my cellphone, on the back of receipts (in blue ink, even!)… After I have a draft I like, I sit on it for a while, picking at it on my laptop a few times a week. Once I think a poem is nearing completion, I print it off to work on it longhand again.

Most of the poems I write lately are relatively short, exactly or almost fourteen lines. Much as I love sonnets, this isn’t something I do on purpose. Instead, it seems a dozen or so lines is a natural length for the thoughts and sensations I want to explore. Because I’m working on shorter pieces, I can run over lines in my head and get first drafts out quickly. When I’m feeling optimistic, poetry seems like a natural part of my everyday rhythm, and writing an activity that is not at odds with the other things I have going on.

Annick MacAskill’s poems have appeared in The Fiddlehead, Lemon Hound, Arc, CV2, Prism, Room, and other journals. She has been longlisted for the CBC’s Canada Writes Poetry Prize, longlisted for the Ralph Gustafson Prize, and nominated for a Pushcart Prize. She is the author of a chapbook, Brotherly Love: Poems of Sappho and Charaxos, as well as a forthcoming full-length début (Gaspereau Press, 2018).
at January 10, 2018