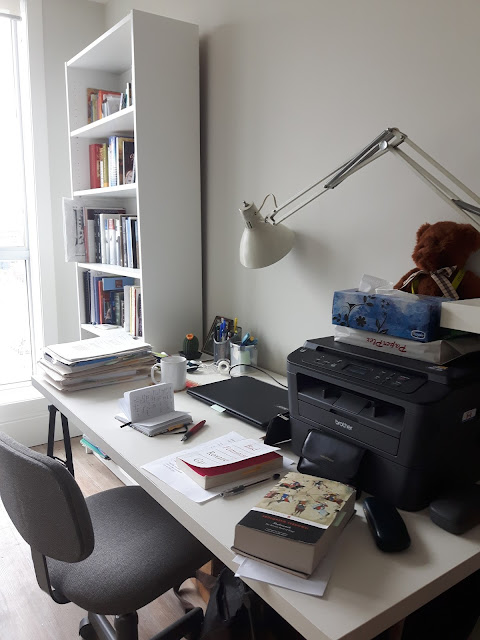 I don’t have a writing day—

I have days when I write—

And days of confusion: life—

And days when I try to make sense of this land I have immigrated to: myself—

When many or all those days happen on the same day

I have a writing day!

The first draft usually comes to me, usually an unexpected guest.

I carry a small notebook wherever I go, ready to embrace the poem when it visits.

I don’t interrogate it, don’t ask,

“Where have you been?”

“Where are you going?”

The world is my desk: my room.

I am at the receiving end of myself.

How about a story, then?

This is a true story. In narrating it, however, I am torn between two impulses: one of providing all the many details you need to shoot a documentary; and the other, to strip it of identifiable details so you can approach it like myth. Isn’t it why I am asked to write this piece? Because I have a proven record that I can distort “facts” and give readers an alternative reality they cannot find around them even if they tried? Isn’t that the definition of a professional writer?

I was walking to a subway station when this anonymous poem encountered me. So, I pulled out the notebook and started to write. I kept on walking, and the poem kept talking. It was getting dark, so I had to concentrate and use the street lights as I went along. A few pages into the poem, I heard a voice, “What are you doing? Are you writing poetry?”

I thought I had completely lost it— was crazier than I thought I was. Not only did I hear the “muse” who told me to write, but I also heard the archetypal critic questioning the act of creation!

Then I thought, “I have been writing for a long time. I know better than that. I know that the critic shouldn’t come in until I finish the first draft.”

I decided not to oblige the critic.

But the voice kept repeating the question, “Are you writing poetry?”

In a decisive moment, I turned around to confront the skeptic.

I found a couple of young men! One of them was the voice, asking the question for the nth time. The other was wearing an apologetic smile trying to pull him away.

I considered the question for a few seconds—I didn’t want the interruption to last. I knew a person from Porlock when I saw one! I wasn’t going to let that happen to me!

But I was also curious! How many people care what we write? I have been writing a lot in public, but never met with a question like this.  I looked into his dark eyes, and trusted him with the truth:  “Yes!”

Him: Can you share a few lines? Just a few?

Him: Please! Just a couple of lines?

I flipped the pages and read the beginning lines:

Then said, “Now, excuse me, I have to finish this,” ran away
and managed to finish the poem.

Those times are moments of poetry and self-doubt

the moments I meet me in you

This is to say,

Thank you for asking

Bänoo Zan is a poet, translator, teacher, editor and poetry curator, with more than 160 published poems and poetry-related pieces as well as three books. Song of Phoenix: Life and Works of Sylvia Plath, was reprinted in Iran in 2010.  Songs of Exile, her first poetry collection, was released in 2016 in Canada by Guernica Editions. It was shortlisted for Gerald Lampert Memorial Award by the League of Canadian Poets in 2017.  Letters to My Father, her second poetry book, was published in 2017 by Piquant Press in Canada. She is the founder of Shab-e She’r (Poetry Night), Toronto’s most diverse poetry reading and open mic series (inception: 2012). It is a brave space that bridges the gap between communities of poets from different ethnicities, nationalities, religions (or lack thereof), ages, genders, sexual orientations, disabilities, poetic styles, voices and visions.