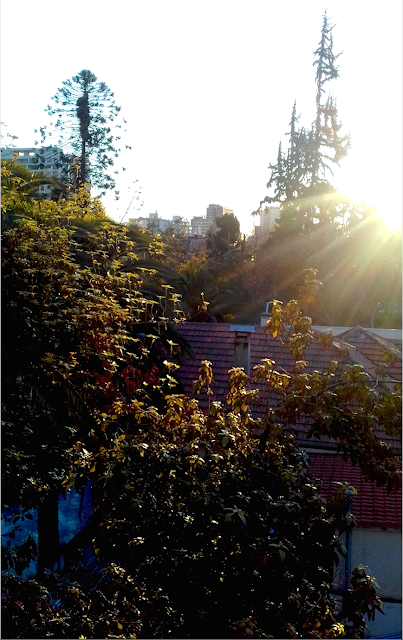 First day of the year is here, a good time to think about process a little. As requested I am going to ramble on for a stretch about writing, though not translation, since while the latter is related it feels different and merits its own reflections.

A ‘writing day’ for me is not a scheduled sit-down for hours, so much as an occasional and regular transfer of assorted thoughts from notebook to computer, before I organize something coherent and continuous out of the fragments. I am a notebook person and jot things down all the time, not so much about myself as about the buildings I pass, or the books I’m reading, or the funny green birds that hop across my path. Quick sketches also help with my visual memory — what might look like scribbles objectively, but that activate a different part of the brain in a helpful way.

The actual writing seems to happen on its own, in a sort of tunnel of hours that disappear. I wonder what happens during the mind at such times; it’s struck me before that the impulse to concentrate like this is similar to the religious impulse, or might even be the same thing.

I get interested in things really easily, and while this sort of magpie tendency has its positives, it also means that I dash out a lot of stories, poems and short essays on different subjects without dedicating myself in a scholarly and focused way to a longer project. This is something that in the last couple of years I have begun to feel is important.

Just like everyone else, there are parts of me that are frivolous and happy-go-lucky, and parts that are melancholic and lyrical; the part that is drawn out depends on my surroundings. I studied history and there’s a side of me that gets excited by the idea of documents, investigation and archives. In my email this morning there was a wonderful message from my great aunt, who has started to type up my great grandmother’s old notebooks and taped interviews. There are preliminary notes on her studies in Germany at the Hans Hoffman Art Institute, travels in Italy and life in Canada on a cattle ranch before she moved to California, which she would later chronicle in a book called Ranch Stories.

Anyhow, my writing day. Here with literary remote I’ll fast forward through the entire morning and early afternoon, taken up with New Year’s matters that have nothing to do with writing (though everything has to do with writing). Now it is evening. I am content and relaxed but my body feels better when exercised. I need to ‘run myself’ regularly, as if I were a border collie, or else I get irritable. I’ve thrown on a Stanford soccer T-shirt from a camp years ago, or that’s possibly a hand-me-up from my younger sister.

Outside, roses peek through the trellises; the noses of dogs too. The occasional bark makes me jump. There are cats on every block, and they all flash me the same look. It’s disconcerting, but I like cats. Christmas lights are strung up everywhere along with bright decorations; it’ll be a pity when they come down. There’s pink in the sky and the mountains are slate gray against pale blue. Patches of gold light still come through the green branches, and the windows of the buildings are like mirrors at this hour.

In the afternoon it’s almost impossible to go out because of the heat but now it’s a quiet time, lovely and cool. The shops are all closed except the 3 Reyes Minimarket, which sells alternatives to gold, frankincense and myrrh. In one of the closed shop windows, dolls with string legs commune with each another. Sprinklers make Rorschach blobs on the sidewalk, and the dry cement, which needed that humidity, absorbs the water thirstily; a good moist smell rises up. I pass a mural of Kali, the Indian goddess of Time, Creation, Destruction and Power.

As I keep running I feel lighter and lighter. The part of me with human complaints—itchy legs from whatever pollen is in the air, blisters on my heels, etc.—gets shed and a sort of second self begins to float down the streets, a supernatural version perhaps like the Kogii character in Kenzaburo Oe’s Death by Water that impersonally observes what is around me, or just myself without so much damned self-consciousness. Hot shower now; then coffee. Double espressos are my favorite, but there’s something comforting too about a big orange mug full of fresh coffee with milk. Dripping hot water through a cone packed with ground beans is a calming way to enter into things.

Well, here I am now in my chair. The photo above was taken before I set off on my run, when there was still enough light. If a writing day has to do with everything around the writing (which in the end is the writing), I don’t know what to offer beyond notes. These are the first words of the night.

Jessica Sequeira ​is a writer and translator from California, living in Santiago de Chile. Her works include the collection of stories Rhombus and Oval (What Books Press), the collection of essays, Other Paradises: Poetic Approaches to Thinking in a Technological Age (Zero Books) and the bilingual collection of poems, Diversion and repose / Diversión y reposo (Pez Espiral), as well as several literary translations. Currently she is editing a novel.