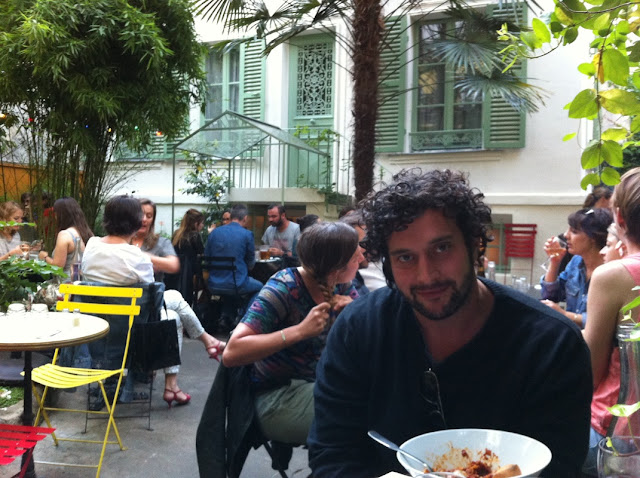 I wake a few hundred yards from the Moulin Rouge. My lady is a gentle economist whose work brought us to Paris. When she rises, I present my obeisance, and breakfast. The pain aux raisin is circular, with intertwined segments, like our fates. A bucket of espresso—the metal mechanism is blackened from overuse.  She leaves for work when the bells of Sacre Ceour basilica chime nine times through the windows.

French lessons, workouts, spousal support, visa wrangling, teaching, tutoring: so many reasons not to write but every day I slough off these skins and sit at my desk with its puppets and pictures of mythical beasts. “Don’t be ashamed of your monster,” reads the note I’ve plastered on the wall. Beneath the note, a giant octopus threatens a warship.

But this next book is a sasquatch war story—the book that was too close to write when I came home from Afghanistan. But the story doesn’t care where it gets written so long as it gets written, and sometimes I’ll walk a few blocks to the sketchy café on Rue la Condamine. Here the drunks are already moaning into their whiskies by 9:30, and the café crèmes are a mere three euros. I meet my friend Corinne who is brilliant; she writes books about goddesses and people turning into cats.

Elegants and wretches stroll past. It is not quite cold enough for scarves, but these are ubiquitous. It is far too cold for skirts, but these are common, too. Paris is a performance. It doesn’t matter if you’re a fashionista, wino, or lowly bohemian. Paris invented hype. It is glitz and arrogance. The roofs and statues are gilded in gold, but the gutters and sidewalks stink of piss.

We English writers in Paris constantly fight against the cliché tropes, but we’ve succumbed to the biggest one. Paris itself. Who are we to follow in the footsteps of the greats? The Hemingways and Fitzgeralds and Pounds and Steins? Even their names are ringing false. What is truth?

In the evenings the city unwinds and the petty bureaucrats evolve into great seducers and dancers. The artists unfurl their feathers. The holiday street lights illumine the people in their jackets sharing aperos. To get to the writing circle I endure the filthiest of metros: the notorious thirteen. I am too big for this place. On the metro a man is wedged into my armpit. An elderly woman spears me with her elbows. The words Madame and Monsieur are ostensibly polite, but hurled like curses.

We in the writing circle are Irish and Canadian and American and English and Australian and French. I’ve never read anything bad from any of them, even if I didn’t like it. These friends are award-winning and published and serious about craft. Many have sold books, recruited agents, attended MFA programs or PHDs of creative writing.

Their stories stay with me: Tasha’s narrator is haunted by her lover’s suicide; her prose is crisp and lyrical. Ferdia has been working on something mysterious and teasing us with these polished short stories set in Ancient Greece. Helen has written about a homosexual in the 50’s who goes to a mental hospital to be “cured.” Albert is penning a masterpiece called, “Consent.”  Chris  is writing a spectacular book on bullfighting.  He and our friend went to Spain for the running of the bulls and the friend was gored which was terrible for him but magnificent for the book.

We drink far too much wine under the influence of cheese and fresh bread. Sometimes we squabble about words, “that dialogue isn’t doing everything you intended,” “I feel like I’ve lost track of the physicality here,” “is there a way to show this?” Helen deploys her boyfriend to restock the wine. He had been vaping like a dragon.

By the end of the circle my brain swims with ideas, my sasquatch story has been overhauled with edits and recommendations, and my knapsack has been loaded with loaned books. I kiss all the cheeks in valediction, even the men.

It is late. Too late for the metro. I am stumbling. I didn’t notice, but it snowed.

Paris has a system of rental bikes as an alternate means of public transportation. I’m too drunk to navigate my bike well, and my knapsack has too many books in it, throwing off the balance. But I only fall three times, twisting to put my body between the ground and the books. I am honked at twice, and not killed.

The idea of the Parisian bohemia—we fed it and fell for it, all these writers. We thought that there would be magic here and our ideas would expand and we would write great books. We were suckers: naïve, childlike. But enough of us were duped.

There is an illusion of Paris as this great place for writers to flourish. To my incredible astonishment, it’s real.

Matt Jones has penned prose and poetry about his experiences in Canada, France, Afghanistan, Nicaragua, China, and while on a warship. In 2014 he won Arc Poetry Magazine’s Readers’ Choice Award for his poem “Wounded Village.” His short story, “Drone,” will be an upcoming publication in F(r)iction magazine.  Explore his work and join his mailing list at matthewjamesjones.com
at January 20, 2018