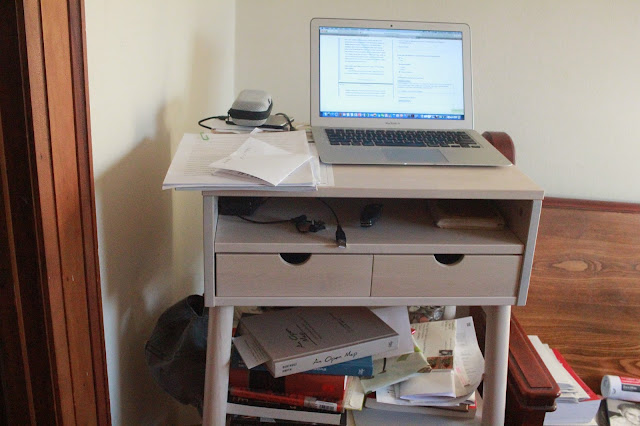 9:05 Receive email prompt from rob to think about my writing day. I just tried to knock out a weekend’s worth of email. Now looking at the screen. Now coffee. Now time to flip the record (Nina Simone at Newport).

9:08 Layli Long Soldier’s Whereas has got me thinking a lot about writing, about how such thinking inhabits writing. That is, the words of others can often inflect my own sounding within a writing day. Shapes and phrases, sounds and rhythms of urgency move into my thinking, the daily hum and calm of routine. I value these adjacencies. In Long Soldier’s work there is an intimacy with language and an awareness of the social removal of the writer from her language, the train wreck’s white tongue. The flapping of social discourse that inhabits an English that must, at some level, be coeval with a body of feeling. I think about the priority of language next to the sensate images and feelings that coexist with words, that shock or absorb certain words to include new outlooks, an achievement of an attitude. This latter is hard to accomplish. Form is not a stable object. Poetry is a history of adjustments and attunements. Attitudes arrive from the knotty substance of life. One’s position in relation to others is activated, assessed, required. If I can’t form a new outlook, don’t bother. I don’t mean something heavy. There is a softness in Long Soldier’s language that is iron. There are roots. How I feel about a word, a vowel or cluster of consonants. Her attitudes convey a depth of experience. Not always experience, not always knowledge. A speculative tempo outward toward the barely as-yet perceived horizon of where I wander. Reading and writing in adjacencies. The page, the day—they blend. Now, I go wash dishes.

9:34 Long Soldier’s writing disrupts self/world in the gesture of speech. Print. Sound. Blank page spaces. Long Soldier is clear about the dispersed histories and presents and futures words carry. The radical gesture of refusal enlivens an outlook that grates against the reality of a North American past—a violent physical and psychic occupation. Of a present occupation. What Robert Duncan called “the raving mania of the nation.” How refuse the weight of the impositions of conquest, servitude, and conveniently organized liberty?

10:00   Last night, I wrote the following. I wasn’t thinking of Long Soldier’s poems. But her words settled somewhere in me. There’s no direct evidence here. What I’m saying is that communion is my understanding of art. A commons of where we don’t forget but do know the urgencies of our feelings. This is perhaps too much of a build-up for the following little observation, a minor coordination of some impulses working out into a poem at an odd moment in a tavern waiting for pizza:

10:20 My kids are home from school, sick. A storm blew through last night with new cold wind. I putter between projects. Essays. Poems. Reading. I don’t really dedicate time to writing unless there’s a deadline. Poems come whenever. Like last night at the tavern where I began writing about an incoming storm and the maple leaves blowing around and a tree branch that fell on Logan Avenue before I came home with pizza for everyone.

10:28 Hoa reads a poem from her computer by Michael McClure for Joanne Kyger (CA Conrad just e-mailed it from a Richard Brautigan conference where, says Conrad, McClure read “honey voiced”). It is lonely and strange to witness the passing of friends. The time grinder thing our bodies are in.

7:20 Lester Young, “Almost Like Being in Love.” Hoa says, look out the window. Venus and a fingernail sliver of moon to the east ahead of the sunrise.

7:22 “Now / make room in the mouth / for grassesgrassesgrasses” Long Soldier acknowledges an earth of things and actions. Earth of things and the unsaid’s enactments. Invisible lines, permanent trails to the interior of one’s unraveling in the violent determination of the Republic. I wonder about that word—Republic—and the Canadian more common Commonwealth. Instances of sovereignty. “Soldier” from “soldarius.” From “soldato.” One who receives pay. Solidus, a gold, Roman coin. Stamped by the Emperor’s image. Coined. To be lost in grassesgrassesgrasses.

9:00               Notes on Writing my Days for Rob
Every day you
look for surprise
in the ordinary
routine of now.
An awakening
through the noise
shows what’s light
and readied
to be known,
your own ongoing
ground. And on
you return like
a musical pattern.
On to the sound.
On in the round
of days to play
in, as if a child
wilded the lost
and the found,
the weird and the
blatant beat.
To be shown
new again.

Dale Smith is a poet and scholar of poetry and rhetorical theory. A book of poetry, Sons, was published last year by Knife / Fork / Book, and two edited volumes appeared with the University of New Mexico Press's Recencies Series: An Open Map: The Correspondence of Robert Duncan and Charles Olson and Imagining Persons: Robert Duncan's Lectures on Charles Olson. Recent reviews, essays, and poems have appeared in Brick, Brooklyn Rail, Colorado Review, Denver Quarterly, Poetry, and The Walrus. He teaches at Ryerson University, Toronto.