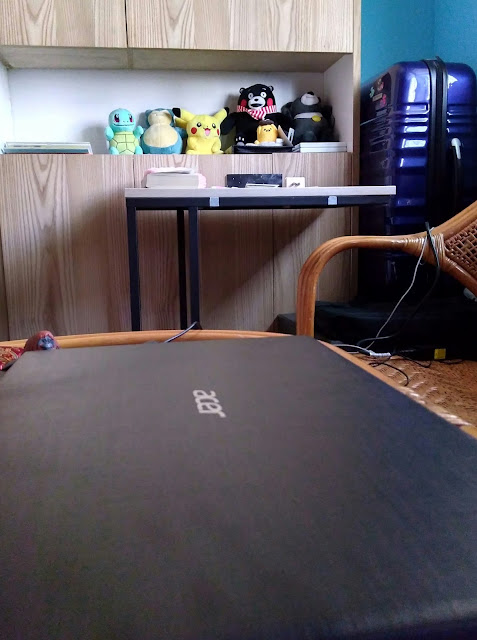 i start by painting my nails, because if the polish is wet, then, for fear of messing it up, i'll stay at my computer and write. it's nice to worry about sullying my nails, rather than about screwing up an as-yet-unwritten poem or tarot log or something. i don't have any other tricks. finally, the executive dysfunction that tormented me for the middle part of the 2010s has vanished, along with any seasonal affective disorder, in southern taiwan's tropical climate.
pete and heather are the only people i know here, where the cost of living is low but the quality thereof is high. i learned that they were moving here too when i backed out of a literary collective. i told the group chat that i wouldn't be around for in-person readings because i was leaving to work in taiwan, and pete revealed that he and heather would be doing the same thing. they're in taipei, though, and we haven't been able to figure out the timing for the high speed train that gets you from one end of the island to the other. i don't think that this failure is some big revelation as to why any of our post-in/words collectives haven't panned out. it's that moving to taiwan is expensive, and teaching schedules and lifestyles don't encourage early morning starts to the weekend.
craig offered to send my teaching cohort photos of me flailing passionately on the ground at karaoke, as proof that i'm a cool person. i'm not great at making friends or forging connections. i told him that i guess i'm fundamentally awkward and unlikable. i don't get invited out to the same things as everyone, perhaps because i don't have one of those ubiquitous scooters for day trips to little ryukyu. someone else said that i'm too introverted and aloof.
i think that it is hard not to be conspicuously uninvolved from the canadian small press scene when you aren't living in canada. canlit seemed too nationalistic and stifling a label even before the concordia bullshit broke. i wasn't as interested in midcentury canadian writing, or even in material chapbook production, as my in/words peers, so it was hard for me to feel like a good fit at home, too. i say 'home' like that's a real signifier for a twentysomething english lit graduate: in 2017, i visited ten cities and lived in three. i didn't do much writing in halifax because i was learning how to become a teacher, but i did a lot of writing (and a number of CBT worksheets) on the train ride back home, and then on the way to vancouver.
it makes sense, then, that most of my recent publications have been online. i was a regular contributor at word and colour (before the editorial shift) and at the salvage (before i moved). right now, i'm combing twitter for submission calls and trying not to feel bad about breaking my weeklong snapstreak with jesslyn. she told me that poetry was never really her big thing, but that she had a blast at show and tell's keyboards! show. i wonder if i'd lose my shit at being asked to compose a poem on the spot using a typewriter--i'm wed to my backspace function, but who's talking about marriage?--or fall into a familiar routine of trying to be as shocking and obtuse as possible in front of my friends.
i'm put off by a few online publication pieces because they try too hard to be alt lit, like that scene wasn't concordia before concordia. playing with memes and trying to generate some ultrahip poesis hasn't really been my deal, and i'm a little embarrassed that i once won a prize for precisely this sort of thing. despite craig's assertion, i'm not a cool person. literary cred doesn't come easy if you're too jaded and distant. a lot of my writing happens on the weekend in the evening--in ontario's early morning, like everyone else--when i haven't spent the day teaching or subbing or hustling somehow.
they tell you not to teach to the test, and i imagine that you shouldn't write to the publication, but that's what i'm doing now. i'm trying to get some stuff in for the hart house review's upcoming call, because it seems like that's what youngish canadian poets should be doing (and because their issues are delightfully, decidedly not a sea of whiteness). angelhouse wants many more submissions by women and nonbinary or genderqueer writers for an issue that interrogates what poetry is (i.e., not just free verse by tenured academics).
lately, i've been playing a lot of pokemon showdown online with jayce, who lives in scotland. one battle of ours devolved into a pair of literal fluffy fairies fighting each other with psychic powers and poison. this seems like the sort of material in which a press championing queirdos (queer-weirdos; there’s no comfortable way to make this portmanteau work) and esotericism would rejoice. or is it a stupid idea that screams weirdness for weirdness' apolitical sake? i will ask my friends, because writing, despite my remoteness, has, at the end of the day, been about friendship for me.

Jenna Jarvis was born in Ottawa and lives in Kaohsiung. Her writing has appeared in Word and Colour, The Salvage, Sea Foam, and other digital and print publications. Her poem "syndical not synecdochal" secured an honourable mention for the Puritan's 2014 Thomas Morton Prize, and she was the winner of the 2012 John Newlove Poetry Award, as well as Carleton University's 2011 George Johnston Poetry Award . Her third chapbook, year of pulses, is forthcoming from above/ground press.
at February 25, 2018