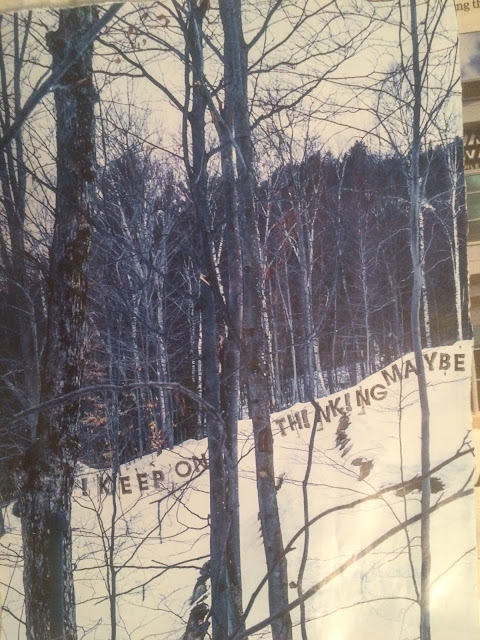 I get up at six. Put on some coffee. Pee. I go into the living room and open the laptop. I go to the piece I’m working on for Rob, for his series about the typical writing day. I figure if I can get at it early, before I’m tired and irritable, I can make some progress.

But I seem to have woken up tired and irritable.

I start reading what I have so far for Rob. I move some words around. Delete some words. Add some words. Move a paragraph up. I look at the top of the screen and watch Google Docs save what I’ve changed. When it says, “All changes saved in Drive” I close the laptop.

There’s noise upstairs. I think it must be Mark. He got a new SAD light yesterday and I imagine he’s sitting up in his room with it shining on him.

Eventually he comes downstairs. He has the light under his arm. He plugs it in and puts it on the table beside me. It’s like daylight.

Mary gets up. We let the cats out of their room in the basement. We feed them. They yell.

I feel like I’m sitting at the top of a tall, pointed tower. If I move in any direction, I’ll fall. I’m conflicted about everything. Every little thing that happens, from Mark making oatmeal to cats yelling, I’m conflicted about it. I think one thing, then I think I should be thinking something else. Then I try not to think at all.

“There’s water on the counter behind the coffee maker,” Mary calls out. “Is it leaking?” She’s been asking this question since we got the coffee maker a week ago. I want her to stop asking. I also want to not care that she keeps asking.

“It’s just water I spill when I’m filling the tank,” I tell her. “I always miss with some of it.”

We talk about the dreams we had last night: I had a dream that I was on some kind of writing tour and my sister was taking care of the logistics. I couldn’t find something that I wanted to take along, but we were running late so I left without it. Mary had a dream that the new string of lights she put up in the kitchen, snowmen lights that were on sale after Christmas, fell down and were lying in water.

“Is Moge throwing up?” Mary asks.

“I thought I heard the throwing up noise.”

So far, that’s my day. Is it typical?

I guess the point here is that there is no typical writing day. If you poll a bunch of writers about their typical writing day, they’ll each tell you a completely different story. But this atypicality isn’t just from one writer to the next. If you are a writer and you talk about your own typical writing day -- and really, if you are anybody talking about any sort of typical day -- what makes the story interesting are all the little atypical moments that invade your typical day and threaten to knock it completely off balance.Typical is a state of mind that patterns your day, allowing you to travel safely among the daily anomalies that threaten a state of mind that rests in the typical pattern of a day that tends toward restating itself over and over as a prototype of every other day.

Typicality blends into itself and disappears, leaving all the unexpected moments shining like stars in the night sky. But then it shows itself again, like clouds that you can’t see at night but you know they are there because you can no longer see the stars.

All the little differences that make your arrival here today interesting -- and it is interesting because today isn’t yesterday -- don't change the core typicality of your writing day if you characterize your writing day as typical. But if you try to find what’s typical in your day, everything that actually is typical will disappear beneath the chaos of moments that are like words in a sentence trying to make sense of each other.

When you talk about a typical day, you're moving in the direction of a prototype, an example from which the typical day might be extrapolated. But the core of a strong writing experience is a sort of ongoing atypicality that results from a hunger to experience your engagement in writing, each time you experience it, as though you have never experienced it before.

I think every writer feels his routine as atypical relative to the routines of other writers. That’s what makes it fun to hear a series of writers talk about their typical writing day. But to call forth your day as routine, or even as an example that could stand as the basis for an extrapolated routine, is already to understand your personal narrative as typical -- typical, not in relation to other writerly narratives, but in relation to itself.

To call your writing day typical is to compare yourself to yourself as a means of finding yourself again in the patterns you inhabit from one day to the next.

I do have a typical day. It's a weekday and it starts just before five in the morning. It includes a cup of coffee and a ride on a bicycle and eight hours at a desk at Toronto Reference Library. There are other characteristics in that typical day that I could inventory, but none of them would provide you with much of an understanding of what it means to me to be a writer. The moments that I would be inclined to share as examples of what circumscribe my life as a writer are not part of my typical day. They come as a surprise, their character as writerly moments arising from their lack of typicality relative to other, much more predictable, moments in my life.

If there is anything typical about my day, relative to my experience of myself as a writer, it has to do with arriving, at various points in the day, in front of groups of words and beginning to wonder about how they find themselves organized. And then continuing to wonder how they continue to find themselves organized. There is nothing typical about when this might happen. It could happen at any point throughout the day. At work or at home. On the bus or the subway. Even sometimes when I’m on my bike. And these groups of words could come in the form of a communication plan, an email, or a friend’s short story.

How does typicality find itself, or assert itself, or even recognize itself within this sentence I am writing right now, for instance?

Maybe the idea of typicality shows itself within a group of words in the way the words resist each other; in the way the words group themselves as resistant to the tendency to become something typical; in the way the words spool across the page, anticipating, obfuscating, rebelling against their antecedents, as they lurch forward into the blank space ahead of them, attempting again to escape everything they are right now in this moment.

Ken Sparling is the author of seven novels and the creator of a bunch of handmade books. Check him out at Toronto Public Library. Or contact him at dadsayshesawyou@gmail.com