Sarah Burgoyne : MY WRITING DAY: OUR LADY OF THE CAUSTICS | AMATEUR PHYSICS 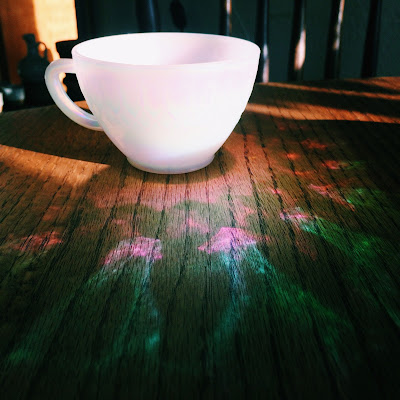 1.      I wanted to replace the word ‘caustic’ in my own poem one morning by opening the dictionary very wide and turning the pages above my head so that I wouldn’t disturb my body’s prostrate position (which it had been in since the night before), and then the Universe (my own sense of it), until all that would remain of the task (upon finding a suitable replacement) would be to put down the tome, reach across the nightstand to the pencil and the poem, scratch out the offending word-thing so that the resulting object would be a pristine sheet of glowing paper (its bleachedness lit only by the deathly pallor of my sleep face), minus the scratched out and replaced word, upon which would shimmer a now perfect poem which little by little would annihilate the world with its wisdom, for that is how I see the end of the world.

3.      The accruing verve that followed my brisk google search of the third definition’s image made me feel somewhat like a furloughed pony who spies a rainbow, sees herself enhanced, and suddenly remembers that the tub of gold at its end has much worth, and is in fact very real indeed -- this tub and its ejected rainbow. As I scrolled, slowly but surely I wanted to strip ‘caustic’ of every definition except for the third, and thus make a saint out of it.

4.      As is my pastime (namely, to watch science tutorials on youtube), I searched for a science tutorial on youtube, and found a singular video of “caustic”: in this video seven cubes of jello, all colours of the rainbow, are altogether tossed into a beam of light (sunlight, I believe), and bouncingly land intact, (that’s how the light jiggles through). Those jello cubes, seemingly full of mystery, are like certain closed heavens, such as libraries and Utopia, and in the beam their caustics hypnotize me as do my two federal glass iridescent moon glow white textured pearl lustre tea cups gifted to me by a friend, abandoned tiki buffet restaurants, small gasoline spills, and translated instructions to “oil boil” my sesame crackers, for translations are unshut and always communicate with the infinite.

5.      However, most gloriously of all, light in the labyrinth, the most alive of worlds, light with the tenderest flesh, is the caustic made from blue pool waves. It strews sublimity as it wobbles, and wanders web-eyed through utopias and glistening populations. I now know the pool floor (under light) is (for sure) the ceiling of the soul.

6.      A panicked phone call from a friend after I failed to mention in my text that it was in fact a “cat” that had just broken into my apartment as I was making breakfast (“broken in” being perhaps a too-strong term for “mosied in” albeit uninvited) and not, as he thought, a dangerous human person, led me to mentioning to him (after some abashed reassuring that I was in fact OK--the cat was not dangerous, as far as I could tell, and even had a name tag, strangely bone-shaped despite not being a dog, though indeed cats probably interact more with bones than dogs do over their lifetimes of hunting small living creatures--and large, if you include myself and my history with cats which is now not worth mentioning--having just been mentioned indirectly--upon which was emblazoned--or however one gets a name into a metal surface--the name Pompidou--which read only slightly dangerous, in wiliness and eyebrows perhaps, though Pompidou, the cat at least, was indeed what one might call “forward”) my recent discovery of the caustic, and how a new school of philosophy must build itself around the caustic, and how, in fact, to be quite frank, or perhaps crass, that if I were in fact a pony, or horse of some kind, at least hooved, that I could see no better fate (after being furloughed of course), at the end of a long lush life of eating clover blossoms and prancing, that, if it had to be this way, and I were to be made into gelatin (as is the fate of many horses, much to the horror of a child who loves "jello-jigglers" and horses equally, as I was), that I could see no more glorious end, than to be made, yes, into seven cubes of jello, each a colour of the rainbow, and tossed into a beam of light...and out of this conversation emerged the term (coined by said friend) permanently etched into my heart’s mind, "equestrian transcendence."

7.      To put it simply...I let caustics fuse me. My heart belonged to the caustic, my poem to the word-thing, my head to the glass of water under my lamp, where, even there, caustics furnished their thaumaturgy. A glib marbling lightway led to corridors covered with thought carpets, upon which I moved noiselessly. When the caustic was in the room, it came to pass that the thoughts of me, abashed, opened up, and there sprang forth, like a pony, from their pitiable fragments, a surface on which there lay, as in on the pool floor, a poem of light and refraction.