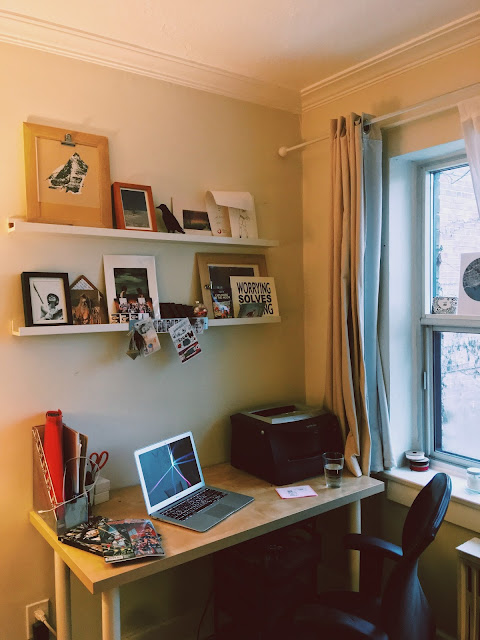 Before writing a book, and then doing the edits for that book while also working a full-time job, I never had days on which I scheduled writing. I figured that if I was struck with inspiration, I was struck, and I’d be able to find some time to sit down and scribble something out. Now, I find I have to schedule everything, or I’ll never get anything done.

A writing day begins whenever I can lever myself out of bed, depending on how late I stayed up the night before. I work from 2 p.m. to 10 p.m., as a news copy editor, so it can be hard to put myself to sleep early enough to get up at a fruitful time the next morning, especially after absorbing information all night. To that end, I leave my laptop on my bedside table, balanced on a pile of books, so that I can just roll over and grab it in the morning as a way to get started earlier.

Some combination of peach-pear La Croix, sweatpants, and the need to pull back the curtains and see if it’s dumped snow overnight gets me upright and eventually vertical, if I’m choosing to write at home (plusses: being able to go to the bathroom at any time without worrying about someone pinching my computer, not having to pay for expensive caffeinated drinks, not having to look presentable; minuses: temptation to sit at my desk and eat crackers while watching horror-video-game playthroughs on YouTube is very high, no one around to judge me). (If I go out, I choose Starbucks - there are five near where I live, and they have fast internet and really sweet coffee drinks, both of which appeal for manic writing.)

And then I just do it, inelegantly and usually with one leg hitched up to my chest as I sit on the desk chair, or balanced on a pile of pillows if I’ve migrated back to the bed. It’s never by hand - I’m not a journaller, and I don’t have the patience to make notes on paper. Music is a necessity to drown out the constant sounds of construction. Aside from that, there’s not much else. I do what I can until it’s well into the last hour before I have to go to work, and I’m panicking because I need to put on real pants and pack a lunch and probably eat something and definitely brush my hair and put on concealer so the rest of the world doesn’t have to see my dark circles. If I think of something I need to add while I’m putting mascara on, I yell at Siri from across the room and ask him to add it to my weird mish-mash “Writing” note that I refer back to for ideas. If I think of something when I’m at work, I have a Google doc called “Scratchpad” where I can jot things down - “Flesh out relationship with Sweetpea”, “Look up how big an eagle’s wingspan is”, “More about Rob”, “Where do the Hudson Bay Lowlands officially begin?”

And then all over again, on whatever day I can manage, somehow finding time to do laundry and cook food in between, but definitely not cleaning the bathroom or sweeping the floor as much as I should be.

Anna Maxymiw lives in Toronto. Her writing has appeared in such publications as The Globe and Mail, Hazlitt, and Maisonneuve Magazine, and has won a National Magazine Award. Her first book, The Lodge, will be published in 2019 by McClelland & Stewart. annamaxymiw.ca
at March 01, 2018