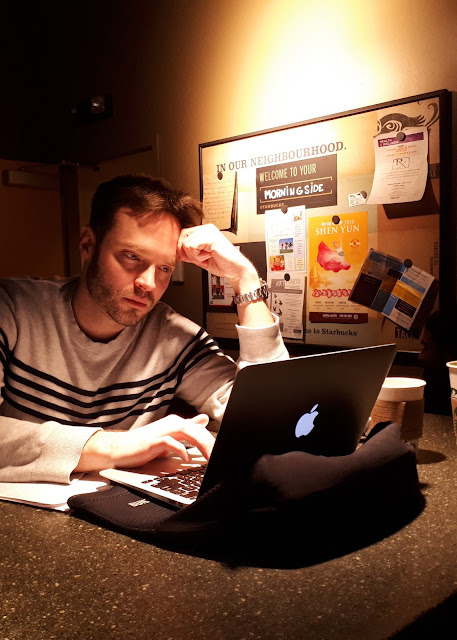 Noise encircles. (In circles). Chaos to order. Conversations happen all around me. A baby cries. In the din of this locale, I cannot make out individual sounds, but only the general bluster of acoustic “information”—an information that paradoxically contains the absence of information.

I write primarily in loud, noisy places: bars, cafés, coffee shops, hallways, airports, airplanes, backs of cars, buses, subway trains. Usually I write when I’m moving somewhere or when there is enough sound to drown out the erratic buzz of my own rattling mind. When that happens—that drowning out—I try to “let go” and type.

I want to plug into the messy and nonlinear elements of life.

I remember finding the desolate wasteland of York University motivating. I remember first seeing what could be called the “post-apocalyptic” factory expanse of Hamilton as I drove over the Burlington Skyway—even that landscape inspires, but not in a traditional manner.

These landscapes of late capitalism or postmodernity trigger a kind of autoimmune response in the writer—a dark feeling of discontent.

I feel angry and empty in these places and in this emptiness words begin to appear.

At some point, after my frustration passes—the frustration of the death of a Wordsworthian (and certainly nonexistent) “Nature,” then I find that I can begin to use this rage to write (essays, poems, scripts, or fiction).

I write in messy or dreary places because I’m usually working on several projects at the same time. What this means is that there is never a “writer’s block” because whenever boredom intrudes in one project, I shift to another—when script-writing becomes mind-numbing, I shift to a poem or when poems begin to lose their sparkle, I shift to theory … and so on.

I read in these spaces too. I read a lot more than I write. I read in the evenings and I write during the day.

I don’t think it’s possible to write in one genre and maintain interest in that genre for the entirety of a given project. Projects should shift in the same way that I move through spaces. Maybe I wake up feeling a bit more poetic (or maybe not), and then, in the afternoon, I may feel a bit more filmic. The next day there will be a philosophy bug gnawing at me. Din. Noise. These things call to me. Machines. A plug in the socket of the world. Worlding and wording. I want to make worlds—worlds different from this one. Worlds that are “better” and worlds that are “worse.” Let’s see all the possible dimensions that exist apart from our own—the dimensions or potential realities that leak through the walls. Anthropocene. Chthulucene. Anthrobscene.

We are all Stalkers in search of zones for writing. I think writing begins as the inexplicable, unknown emanations from objects, events, or people. Writing is a zone.

This is not an idea of “muses,” but of emanation. Zones emanate from history or people or things. The writer should move through spaces and pick up the signals of these zones. This approach takes the “heat off” of creativity or imagination. I don’t really imagine anything.

My fingers just respond to zones. Then it gets written in some mode. However, when writing occurs I’m not sure what motivates it and I’m not sure how to keep writing the next day. Somehow writing does happen, but it’s a chasing of zones.