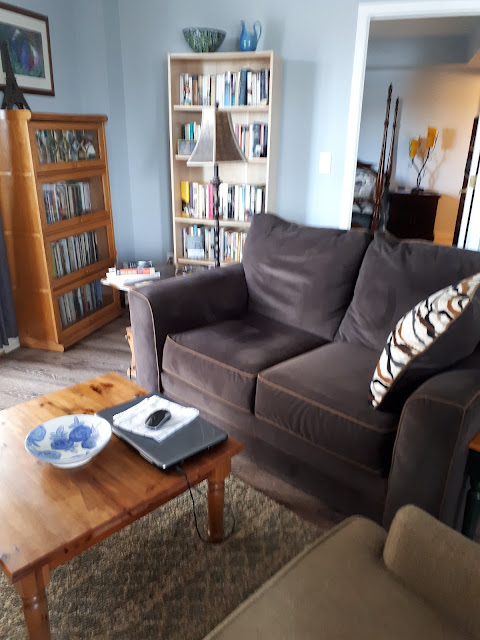 I have never had a writing day. When I’ve been employed outside of the home, I’ve never had a job that allowed for writing time. When I wasn’t employed outside of the home, I was too busy with stuff at home. I wrote when and where I could. Often, I didn’t write because there was just too much else to do. My first book, Under the Abdominal Wall, wasn’t published until I was 39. It was written in scraps of time over the years from high school to relative adulthood. In those years, I worked various shitty jobs, gave birth three times, went to law school, changed diapers, scrambled, scrambled. Poetry came after the dishes were done. They were never really done.

From 2000 to 2005, other than a few contracts and sessional lecturing, I did not work outside the home. My second book was written in that time, mostly in my head, while I walked my little black mutt named Victor. My three boys were young and I was happy to be with them. As well, early in 2001, I was diagnosed with breast cancer. All through that treatment and recovery, I got up in the morning, got the kids out the door and off to school and then walked the dog and worked through poems in my head. Those poems became my second book, Karenin Sings the Blues, which I should have dedicated to that dog. He was killed by a car in front of our house, two days after Christmas in 2003.

I went to the Banff Centre’s Writing Studio in 2004. What a miracle. Five whole weeks in which to write. At Banff, I wrote most of what became my third book, a book of dramatic monologues called The Love Song of Laura Ingalls Wilder. This is the closest that I have ever come to having a writing day. Every day, after breakfast, I returned to my room, made a pot of coffee and propped the pillows up on the bed. I wrote, I drank coffee and, in the afternoon, I walked up and down Tunnel Mountain. I filled a notebook with poems. Such happiness.

After I returned to full-time outside-of-the-home employment in September 2005, writing became an early morning event. The world is quiet in the morning. I got up at 5 a.m. each day so that I could have some time with books and my notebook before work. My marriage unraveled and that worked its way into the poems. Financial and emotional independence became issues of great importance for me. My job addressed one issue and my notebook addressed the other. I wrote and wrote, but only in the predawn hours. That became an angry book of diatribes called For and Against. I regret the anger, but not the poems.

As the years progressed, my early morning writing hours also became workout hours. I had to get up even earlier, so that I could write before going to the gym. Both were essential. You can only do that for so long though, getting up at 4 a.m. and working on poems, then working out in a gym and then going to work. It gets hard. What lost out? The poems. I wrote less and worked out more. I was struggling. Unhappy. Sweating that out in a gym helped me a lot more than writing ever did. Writing is inward. Sweating is outward.

But if you’re a writer, writing is always going to get you. I’m thinking of what the great American poet James Wright said to his son, Franz Wright, after reading some of Franz’ early poems: “I’ll be damned. You’re a poet. Welcome to hell.” Eventually, the workouts worked their way into writing. My fourth book, Hard Ass, is about all that. The struggle. The workouts. The stupid relationship things that I allowed myself to get involved in. It all ends up in the writing. I appear to be unable to compartmentalize. Perhaps that is why I have never had a writing day.

My last book, Metanoia, was written while I worked in the Hansard office at the New Brunswick Legislative Assembly. I kept T.S. Eliot’s Four Quartets open on a tab on my computer. Throughout the day, I read Eliot when I could and wrote a line or two that I emailed to myself at the end of the day. I wasn’t slacking off. I was very productive on that job. Maybe the writing helped.

While I have never had a writing day as such, I know what I need in order to write: silence and solitude. Why are both so difficult to find? I am writing this in a downtown condo in Edmonton, where I live now. The condo is pretty quiet. It’s a good building, but the traffic noise from outside is unreal. It distracts and annoys me and I have written very little here because of it. I am unable to detach myself from the outside world. Again, unable to compartmentalize. Fortunately, I have found a little house in a quiet neighbourhood, close to downtown. I’m moving next month. I hope to finish my current manuscript, “Villa Negativa,” there.

The other requirement is solitude. I am alone and will remain alone. This is the only way it works. My last relationship was with a man who simply could not let me be. When I said, “I need some alone time with my notebook,” he said, “okay, I’ll just sit here on the end of the bed.” No. Just no. My marriage lasted for as long as it did because I was married to a man who knew how to leave someone alone. But that’s all in the past. I only look forward now. To silence, to solitude, to more writing.

Sharon McCartney is the author of Metanoia (2016, Biblioasis), Hard Ass (2013, Palimpsest), For and Against (2010, Goose Lane Editions), The Love Song of Laura Ingalls Wilder (2007, Nightwood Editions), Karenin Sings the Blues (2003, Goose Lane Editions) and Under the Abdominal Wall (1999, Anvil Press). Her poems have been included in the 2012 and 2013 editions of The Best Canadian Poetry in English. She has an MFA from the University of Iowa's Writers' Workshop and an LL.B. from the University of Victoria. In 2008, she received the Acorn/Plantos People's Prize for poetry.