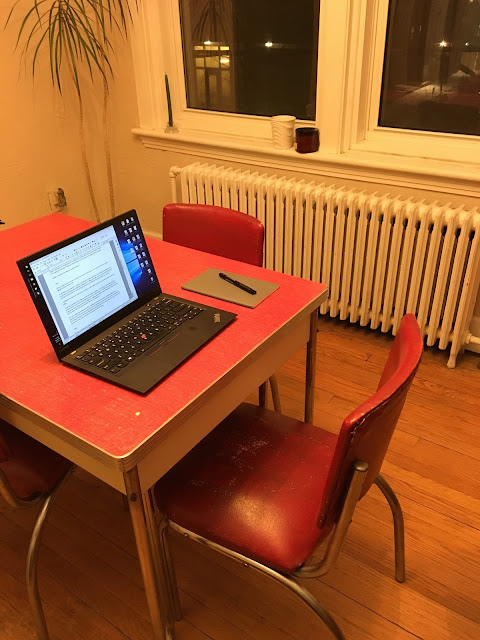 I like to think of every day as a writing day. Avanthi, however, tells me, “Tim, for a guy who always talks about writing, you sure don't do a whole lot of it.”

My problem is that the ratio between the time I spend planning on writing and actually writing is something like 1000:1. By the time I end up finishing any substantial body of work, I will have likely won the lottery.

My productivity in the morning is low. It's hard to think, so I bypass the thinking in favour of the doing. Reading is the closest thing to writing one can do before the act itself, so I usually start there.

I have about thirty pages left of In Cold Blood, and I'll feel good if I can polish them off this morning.

I read about twelve pages before falling asleep, but I'm up again and am ready to produce.

On a good day, like a Saturday without any family lunches and with no errands to run and when I don't have one of the strange headaches I seem to have after Friday nights, I have about five or six hours to write. I have around a dozen projects simultaneously on the go. My methodology involves doing a little bit of each here and there so they will all come to fruition together. Some of the projects have been on the docket for some time (one is an elegy for a friend who died back in July, and I started it that day). This approach is likely why I've only completed thirty poems in the last ten years.

I revisit the list of projects to determine which I'll focus on first.

The path of least resistance today is finding a printer for a picture book, The Cardinal Rule, I first self-published in 2013. I spent a lot of time last month playing with GIMP to edit the images and with Scribus to redesign the layout. Nothing left to do but pull the trigger.

A quick Google search shows that there is a printer, Katari, one block from my house. It feels like -38ｰC outside. I won't be looking any further.

I'm back from the printer (it's as cold as they said) and have a bit of energy left to turn toward another of the easier projects: BestOfTheCheapStuff.com, a blog I use to review cheap wine.

After reviewing over a 150 bottles of sub-$15 wine (it took its toll) last year, my process is fairly dialed in. Since I know nothing about wine, the legitimacy of the reviews is not my primary concern. The wine serves as more of a jump-off point to write about anything else, to get the ideas flowing and my fingers moving, to air my grievances in a public forum. What's grinding my gears today is “Gluten-Free” labels on rice cakes. Obviously they're gluten free. And who cares about gluten, anyway?

I'd like to monetize the blog but nobody reads it.

Took a couple hours for lunch. I'd rather not work on a full stomach, so I read a bit more of In Cold Blood and took another nap.

In all honesty, with regards to writing, I usually don't make it past here, but having successfully found the printer and having also published a blog post, I'm riding on a high. I decide to turn my attention to a project on the other end of the difficulty spectrum, something I've listed vaguely as: “poems.”

I deliberate for a bit over what poems I could've meant. I again scan the list of projects and stop at the elegy.

I had lost some faith in the elegy over the last couple of months. I'm starting to understand that my writing process must involve not looking at works for a while because I need time away from them in order to see how cringe-worthy they really are. Looking at the elegy now, I understand. I delete almost half of what's written in the document. The poem is better for it.

But now, maybe, the elegy is too short, totalling a mere twenty six lines. Surely, my late friend deserves more than twenty six lines, doesn't he? I reread the poem three more times and decide to put it away. Writing in this way is like baking a cake (though not as easy as pie). The poem needs a bit more time in the oven. I'll revisit it next week to see if it's done.

I've been thinking for a while that I'd like to start using pencils instead of pens. I Google, “best pencil for writing,” and am drawn into a hole from which I only emerge some hours later. By this time, I've read numerous websites and reviews; I now understand the relationship between wood texture, lead grade, lead longevity, eraser quality and shape.

I order four dozen Tombow 2558, B, pencils from Japan. Shipping takes two months. Little can get done until they arrive.

Tim Mook Sang has studied and worked across Canada. He is currently working as a schoolteacher in Ottawa, ON. His poems, essays and stories have been published mostly in Canadian magazines and journals. Most recently, he published a chapbook, A Functional History, with bird, buried press. He reviews cheap wine at BestOfTheCheapStuff.com.
at March 05, 2018