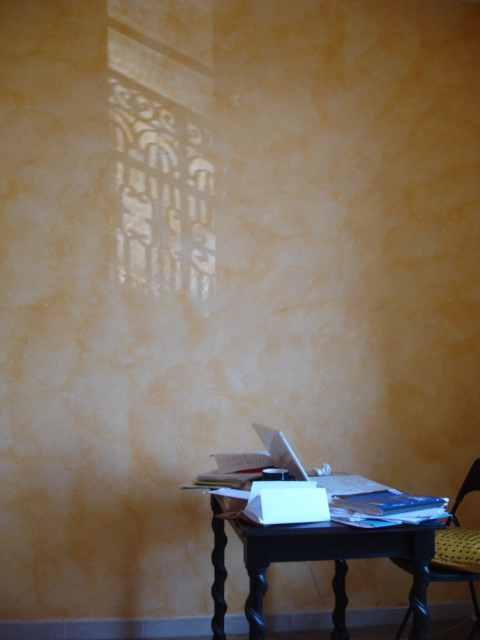 I began writing when I was pregnant with my first child. Six years later I had had another three. How to write? When to write? I was too tired at night. I set aside two hours a day at 2 pm precisely, during which the babies would nap or, later, learn to amuse themselves and not disturb my work time – at any cost. Anyone who remembers Jack Nicholson at his typewriter in "The Shining" will get the idea.

I was never more focussed than during those years of two hours a day max. Every minute counted. Here's a piece I wrote at the time —on a typewriter— about that time. It's an extract from a longer piece called Lost and Found and it's from my short story collection Swimming From the Flames.

There were so many babies. Finding the time did become a problem. And the room. It did not help at all to know that time and space were curved. She tried not to plot her days like positions on a graph. Nothing was more linear than her own time; it was a track, and the space she wanted to reach was an empty room upon it, a cube that, strangely, diminished at her approach, so that she managed to slip in only briefly before emerging on the other side. Often, just as she was about to step inside, the babies themselves would be there. Ma, ma, ma. Needing. Kneading her heart into pulp until she had to tear it out, scoop it out for them, doling: Here. And here. Take. Take. Scooping and hollowing her self out, eyes on the narrow door. Let me go. Until she would step over the wiggling babies (still needing, wanting more) and close the door. Still they would be there when she came out the other side. Her babies happy now, no longer needing, forcing her with their oblivion to bend to them: I’m here, let me come back. Lacing their lives to hers with their nonchalance.

It was not that she did not enjoy her life on the track, but inside the cube space was cornered, time suspended and everything was possible¾even falling off the track, which could be dreamed here in immunity, no repercussions ever.

But there was another danger. She might emerge incomplete, part of her life still inside the cube. Then her hands would muddle at the soup, the shoelaces, numb, her ears open to receive the plaints and whimpers, the needings when they began again, her eyes fixed and distant while she tried to remember what it was she had lost.

Pauline Holdstock is an internationally published novelist, short fiction writer and essayist whose work has been shortlisted for the Giller and the Commonwealth Writers' Prize. Her most recent novel, The Hunter and the Wild Girl, winner of the City of Victoria Butler Book Prize, was shortlisted for the BC Book Prizes Ethel Wilson Award and listed by both the CBC and the National Post as one of the Best Books of 2015. She has written book reviews for the Globe and Mail, the National Post and the Vancouver Sun.
www.paulineholdstock.com
at April 12, 2018