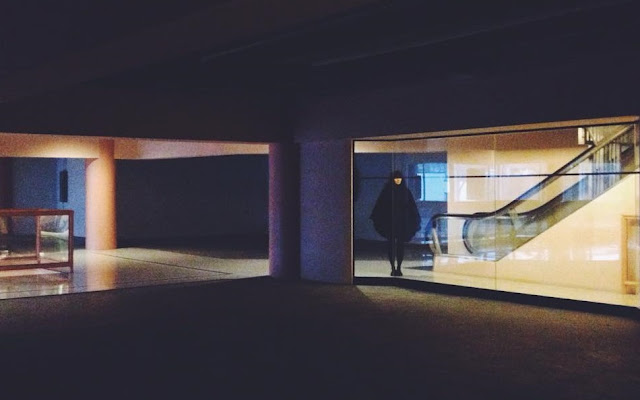 6:12am: The cat jumps on the bed and walks, back and forth, over me. Get up to feed him. Keep eyes closed.

10:45am: Grasped by consciousness and sustained by a sense of obligations.

10:51am: Boil water. Grind Kicking Horse coffee beans and tap into French press. Communicate nothing. Think about nothing. Keep lights off and sweep the curtains aside the window to invite tentative light.

10:52am: Morning is a violent time. Stare at the room and consider that corners are points of collision.

11:20am: Blend a smoothie with frozen fruit and protein powder, relying on nutrients that don’t require my attention. Sit down to work.

11:30-4:00pm: Continue writing the first draft of the second story in my current triptych. Three years ago, I started writing a series of triptychs. Each series coils around a central icon. The first triptych featured the holy trinity of depression, anxiety, and dissociation. It’s named drone philosophy i/ii/iii. drone philosophy ii is published as polynya in SAND Journal.

Spirits catalyzed the narratives of the second triptych. The stories included are, spirit demolition, the electromagnetics of latex & rabbit, and seeing versus perceiving. the electromagnetics of latex & rabbit is published by In Shades Magazine. As a child, I obsessed over the paranormal section of my elementary school’s library: second row from the back, tucked to the left on the highest shelf. Paranormal books shape the narrative to follow, or focus on, the subject. Ghost stories typically begin with famous haunting incidents, progress to descriptions of the spirit, and finish with theories on who the spirit may have been before death. However, in contrast, a lived paranormal experience is a brief disruption of day-to-day normalcy. The second triptych explores this; spirit presence catalyzes human drama.

5:00pm: Reheat leftovers on the stove. Cooking pulls my attention away from writing. Fiction requires the writer to be outside of the room they’re sitting in.

6:30pm: Each day holds between three to five hours of efficient brain energy. I’ve used today’s quota. Experience is of equal importance to fiction as the organizing of thoughts and physical act of writing. As David Foster Wallace said in his essay, E Unibus Pluram, “Fiction writers as a species tend to be oglers… they need that straightforward visual theft of watching somebody who hasn’t prepared a special watchable self.” Social media and television are sugar water to fiction writers - enjoyable without substance. Real writer food is firsthand.

7:15pm: Systematically fifteen minutes late to meet J at our favourite cocktail bar, hidden up a flight of green carpeted stairs on the edge of Chinatown. Honeycombed lattices separate curling leather booths. The interior smells of the markets below: cases of dehydrated mushrooms, dried fish, one thousand herbal notes: an array of dynamic smells I lack the knowledge to know the true names.

7:31: Order Death in the Afternoon, a jewelled cocktail fusing champagne and absinthe. The bartender garnishes the seaglass green liquor with dried rosebuds. Ernest Hemingway claimed to first mix Death in the Afternoon and named it after his book on bullfighting. He recommended drinking three to five in one sitting… I enjoy one.

J and I exchange handmarked drafts of our most recent fiction pieces. We prefer physical copy edits to digital, adding notes in the margins and underlining our favourite lines in each other’s work. The tealight on the table flickers out and the server brings us a bright new one. J’s work thrills me: he offers consistent surprises, fresh turns of phrases, and rapidly growing ability. His praise of my work always warms and invigorates me. I’m motivated to edit with a scalpel and bring fingers to keyboard. It’s a priceless friendship.

9:12pm: Cab to the galley. Greet B, minding the door. He wears a three-piece suit and carries a clipboard. It holds several sheets of blank paper. Those approaching the gallery respond with apprehensive respect towards a Man in a Suit Holding a Clipboard.

Ascend the worn carpeted stairs. After two flights, horn instruments noodle from behind a closed door. The jazz club shivers, their space to the left of the gallery. Sometimes, the door slits open and a trombone player in a striped scarf or a frenetic man wielding a clarinet breezes past without smiling. To the right, the door to the gallery opens.

Mid-century décor engulfs visitors: wood panelled walls, geometric tiles patterning the floor, a worn walnut credenza here, and slouching chrome and wicker chairs there. A performance artist hunches on a stool in front of a table set with a candle and white rose tucked in a tall glass vase. He’s handsome in the classic American sense: blonde and built like the California coastline. He rests one hand on his thigh and clutches a book in the other, costumed in a loose blazer, jeans, and sneakers. I listen for a moment. Miller? No, Anaïs Nin. Not her diaries: Delta of Venus or Little Birds. His hand on the book cover shifts. Ah, it’s Delta of Venus. Arguably, her more well-known collection of short fiction. People lean against the walls and listen. The quiet room reverberates with the low roll of his voice and intermittent crackling of the tiny candle flame.

The next room offers a seating area around a surfboard-shaped coffee table and beyond that the bar: a wave of jatoba wood, chosen for its medicinal usage and association with summoning spirits. The staff, who built the gallery, salvaged the steel and red vinyl stools circling the bar from a closing diner. L bartends with constant calculated movement: cracking cans, mixing simple cocktails, stacking clean glassware, and rubbing the bar down, with a wet cloth, in large circles she emphasizes with her whole shoulders. Behind her, an oversized set of wooden cutlery hangs from the wall next to a sailboat cresting a wave in jagged brass.

I sit on the stool at the end of the bar, closest to roof door, and order a negroni. L mixes it and I ask her about her day. She serves full-time in a restaurant and runs the gallery after work and out of pocket. It’s an eroding love that won’t last, as culture sustained on fumes will starve. Or, in Vancouver, the building will be purchased by one of the real estate speculating wealthy who can’t see value beyond dirty talking their bank accounts, shovelling money into homes as empty investments or metastasizing them into unaffordable luxury condos. As a sentient being, I have more in common with the black bear who eased himself into an empty pool on a hot summer day in North Vancouver than another human who values an excess of fictive currency over human safety and companionship.

9:44pm: Closed spaces fit me like an undersized blazer and I step outside onto the roof, the cool air refreshing. A few people smoke inside the fenced pen. The north side of the building faces a shipping container port. Candy colourful shipping containers rise in rows from flat-bed ships like a paused game of Tetris. Red cranes, bright as lipstick, hover and wait. Overhead lights line the scene with an unreal vibrancy, like the etched contours of actors on stage. I exhale and pick over the objects, filing the snapshot in my mind with words to describe them later: a forgotten game of lego blocks and unplaced industrial hum. The first phrase that comes to mind is often a reflexive cliché. I discard it. I play a game; if square green container is the first phrase to come to mind, what would the inversion be? Ridged seafoam pod. Greet the reader with a familiar experience described in a fresh way.

10:01pm: S steps onto the roof with a beer. We discuss administrative aspects of Real Vancouver Writers’ Series. We propose tighter data recording and methods of sharing it with the board. A broadening platform allows us to support more writers. He elaborates on the roster for our event coming up at the end of the month. Despite immersing myself in literature since learning to read, I’m unfamiliar with half of them and appreciative of his knowledge. He drops his finished cigarette in the tin pail and we move inside.

10:33pm: I sit at the bar, enjoying chit-chat with those who trickle in. In the other room, a poet replaces the performance artist. She unwinds prose poems spun from the etymology of words like snail and clue.

11:00pm: The gallery folds down. L stacks clean glasses and wipes down the bar and counters one last time. I cab home.

11:20pm: Select from the To Read pile and finish the day with a few short stories written by Clarice Lispector. Pick up The Garden Party by Katherine Mansfield and compare the techniques of the two short fiction writers.

Violetta Leigh majored in creative writing and political ecology at the University of Victoria. She has been published by SAND Journal, Litro Magazine, Minola Review, In Shades Magazine, HER Collective, So to Speak, Situate Magazine, and Active Fiction Project.  She coordinates inclusive, diverse literary events with Real Vancouver Writers' Series. She thinks perfection is ugly and in the things humans make wants to see scars, failure, disorder, distortion. Find her online at wwww.violettaleigh.com.