Donna Fleischer : an altar of sorts 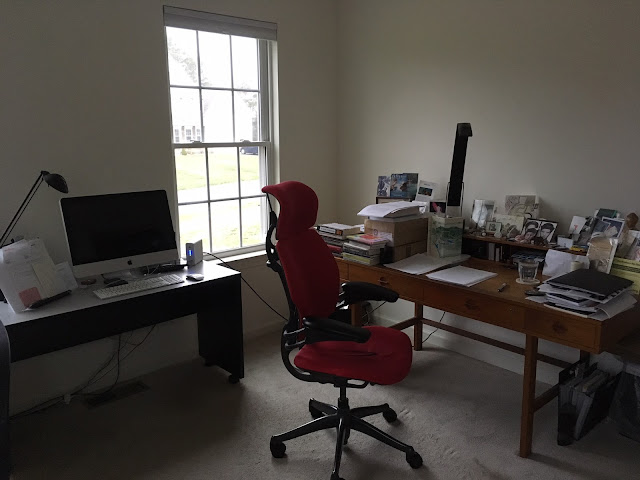 the teakwood desk where i sometimes write has a hinged panel at the back that expands the overall depth when it’s flipped open. otherwise, when closed, it sits upright at the back of the desk, like a piano, providing a smaller more intimate writing space and revealing variously shaped cubby holes which i like to think of as amused portals safekeeping the overheard whispers and ideas when talking with myself all these years.

i began to put certain items on top, one by one. emblems of some deepest pleasure, turned over and over by imagination: a sculpted tortoise the size of my palm; a baltic seashell; tiny pine cones; goldfinch feathers; a buddha of crocodile wood from bali; postcards sent and unsent; pins; bottle caps; photographs; dust ... each thing, over time, becoming a stepping stone, a pebble

the snail, beginning its ascent, in a haiga by poet Marilyn Johnston. her words beside it, “Climb Mt. Fuji, slowly ... .” just a fleeting slip of sumi–e ink and bamboo brush on paper,

that blooms into a reverie of Alan Watts walking into a shop in kyoto for a certain perfumed bar of blackest ink; of his reply recorded in a book somewhere when asked what is taoism­—“the tao. it’s simply inconceivable.”

there’s "Turtle Island", a book of poems by Gary Snyder, poet of the dao, the way, of the wild, in which he records his finding that “The path is whatever crosses.”

the wild. in other words, the opposite of our static black and white notion of a nature either domesticated into convenience and comfort from fear or otherwise attacked as hostile to our kind, as if it were an angry father–god to placate. no. instead, the wild. an open system with integrity and its own rules. as in poet vincent tripi’s words “all change is wild”; in sculptor Bettina Viereck’s hand-rolled steel “sanctuary”; in Andy Goldsworthy’s earth works, Werner Herzog’s films, my haiku offering

how it goes on

through the self leaving the self behind. “being fearless is dying to the self.” that’s poet carpenter Charlie Mehrhoff’s voice. i think of the tradition of Japanese Zen poets who write their death poems, oftentimes in mid life. here is mine