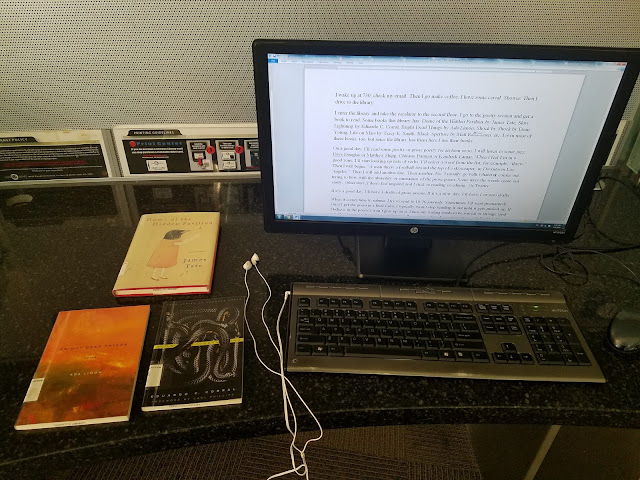 I haven’t had a writing day in a while because I’ve been focused on editing and submitting my manuscript for the past year or so. I think I’ll be motivated to create new work after my first manuscript lands with the right press. With that said, I think of reading, editing, submitting, and writing as part of the same family. Nevertheless, I will now describe what an average writing day looked like for me as I wrote my manuscript:

I wake up at 7:30-8, check my email. Then I make coffee. I tend to drink strong coffee. I have some cereal. Shower. Then I drive to the library.

I enter the library and take the escalator to the second floor. I go to the contemporary poetry section and get books to read. Some books this library has: Dome of the Hidden Pavilion by James Tate, Slow Lightning by Eduardo C. Corral, Bright Dead Things by Ada Limón, Shock by Shock by Dean Young, Life on Mars by Tracy K. Smith, Black Aperture by Matt Rasmussen. I own most of these books, too. I usually read two or three books at a time so I don’t get bored with one text.

On a good writing day, I’ll first read some poetry/prose poetry at the desk for an hour or so. Maybe I’ll read an online journal. Some favorites: Triquarterly, New Orleans Review, The Journal, Poetry Northwest.

Also, I’ll listen to some experimental music. Dave Douglas or Matthew Shipp. Chicano Batman, Las Cafeteras, or Kendrick Lamar. When I feel I’m in a good zone, I’ll start looking up lists of verbs. I’ll select a word from the list, for example, “threw.” Then I will begin, “A man threw a football toward the top of a skyscraper, in Downtown Los Angeles.” I have to be in the right mood. Then I will add another line. Then another. Etc. I usually go with whatever comes out, trying to flow with the absurdity or surrealism of the prose poem. Some days the words come out easily. Other days, I don’t feel inspired and I stick to reading or editing. Or Twitter.

If it’s a good day, I’ll have 3 drafts of prose poems. If it’s a slow day, I’ll have 1 or zero drafts. I tend to keep most of the initial writing. Maybe I’ll have some minor grammatical edits.

When it comes time to submit, I try to send to 5-10 journals. Sometimes I’ll send prematurely. Once I get the poem in a final form, I typically won’t stop sending it out until it gets picked up. If I believe in the poem, I won’t give up on it. Since my writing tends to be surreal or strange (and not what I’d call “mainstream”) I usually receive some rejections. Still, if I believe the poem is strong, I will stick with it and keep sending it out. They eventually land. It helped when I got the NEA fellowship because I feel it validated my otherwise unorthodox writing style. Before that, I’d try to legitimize this writing style by saying “Well, James Tate and Ray Gonzalez are celebrated for writing odd prose poems. I can do it, too.”

I leave the library around sunset. Maybe I’ll look at the koi fish in the fountain. In the past, I’d smoke a cigarette. Presently, I’m trying to quit.

I get home and eat. When I get a chance, I’ll look over the poems I wrote that day on my laptop. Maybe I’ll make some final edits or send out another submission. In bed, I’ll watch the news and check if the Dodgers, Lakers, or Rams won. I go to sleep around 11:30 pm.

Jose Hernandez Diaz is a 2017 NEA Poetry Fellow. He holds degrees from the University of California, Berkeley, and Antioch University Los Angeles. His work appears in The Best American Nonrequired Reading, Green Mountains Review, Huizache, North American Review, Pleiades, The Progressive, The Shallow Ends, Verse Daily, Witness, among others. He has served as an editor for Floricanto Press and Lunch Ticket. His manuscript was a finalist for the 2018 Andrés Montoya Poetry Prize. He tweets at @JoseHernandezDz.