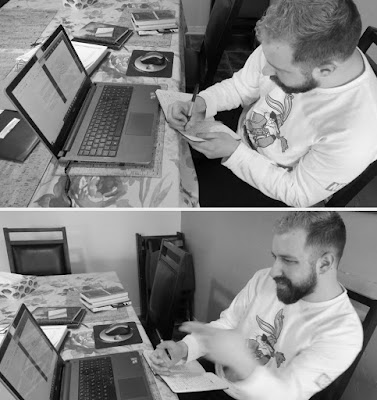 Lately the chirping has been louder, premature almost. I oversleep and get a dreadful sense that I need to “catch up” for the time I’ve lost. The chirping outside urges me on, I talk to myself, the script has started. I open the living room blinds and allow the burning rays of light to set the mood. Counter-intuitively I set my laptop on the dinner table, which has for the past couple months become my go-to work station. Maybe writing in the place of digestion will make the written word feel more like an act of necessity than of volition.

There’s nothing about my writing day that is set in stone, save for the tricky art of patience. Unlike the job I recently acquired and my daily coffee (and other various obligations) it’s not always clear with writing what the next move will be. But I revel in this; I find that to let come what may is the method (or non-method) which yields the most candid results. Typically I’ll gather energy from the absence of idea, from the uncertain sphere I live in. A lot of my poetry originates from the simplest activities: tilting my head back and staring at the ridges of paint on the ceiling; digging into some meaty why’s; fixating on a window in my house and realizing it creates a certain divide between realities. In choosing to see the beauty in the most mundane of constructs I prevent myself from becoming another Jack Torrance. To write I need to unburden myself from all egoistic concerns and perform a thorough examination of possibility. What I mean to say is that closed-mindedness remains for me one of the true offenders in the realm of creative potential; being dismissive or wilfully ignorant is the last thing I want to be when looking outward into the streets of the world. The poetic is a form of personal extraction from the mind to the physical space, the perfect rebuttal to manipulative forces. 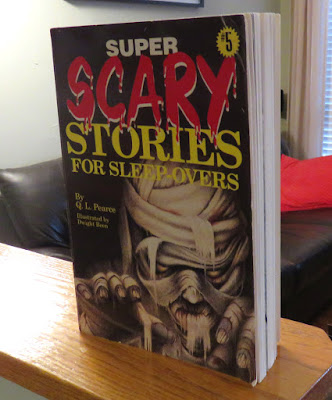 Today is the first warm day of the year and I’m feeling outside of myself. I travel mentally: I envision birds not chirping but picking bread crumbs off a damp sidewalk next to a Brooklyn apartment building where a pair of Italian boxers play rummy in the shade of a four-level fire escape. I try to be innovative: discovering one of those old bedtime scary story anthologies I make an erasure out of one of the pages; I grab a back issue of The Source and scissor out words; I invent my own form of short poetry which I dub flamengu since the syllabic structure grotesquely resembles a flamingo’s neck. Thinking outside the box is the best way to challenge myself, especially if I’ve been drawing blanks for hours.I get up, stretch, go on a quick run. I read and then read some more. I read through submissions for my online arts magazine, a venture currently stirring in incipience. I pour a second cup of coffee and listen to Wanda Jackson. Later I’ll be catching a film. Sometimes the drive to the movie with all the sights you get to see from the car seat vantage inspires me more than the movie itself. It’s small surprise to me that life is often the most fascinating movie of all. I like to pretend I’m a shard of glass, absorbing the projector’s glow on one side and filtering out through the other a pool-like shimmer of distorted impressions. Everything is a little strange when keenly surveyed, and positively absurd when placed under a magnifying glass. I think of writing as a way to magnify further.

Emulsion, much like the magnification of space over the naked eye, is when one liquid disperses into another in which it is not soluble. Most of my work is accomplished inside the self, even as I decamp for other islands and gather scraps; the art of the word is an endless round-trip, a cavalcade-dance on the brinks, where the external and internal combine but retain their discrete forms.

So it is with ease that I submit again to reflection, that quiet linking of the unlike. Someone buzzing somewhere in the kitchen accuses me of wastefulness. Unperturbed, I think. I think about tomorrow, about paradoxes, about patterns of worship. I think about the shadow and the shell and the spectator at the bottom setting the controls. I think about moss-covered machinery in the old heart of Michigan. I think about aplomb, shame, the forest fires; the fires of my past and what stamina they still possess. I think about re-interpreting Ganymede with a mangled brush.

The clouds have begun to conspire against the dry land. It’s exceptionally late and I haven’t written much down today, and yet it’s all a matter of perception—you could say I’ve written a wealth of content, the seed for a future novel lurking there somewhere like a pipefish roving the Adriatic.


Thomas L. Winters (twitter handle @tomxwinters) is a writer and artist who enjoys obsessing over revolving doors and the mysteries of dream clay. He is the founding editor of Bye Bye Nite Magazine and has a forthcoming chapbook of poetry called Sleeping Through The Machine. His work has appeared or is forthcoming in OCCULUM, Riggwelter Press, formercactus, and Corvus Review, among others.