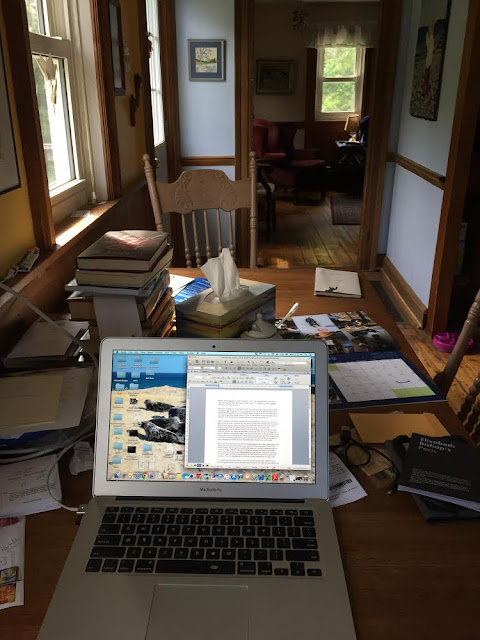 06:10. Paris pokes me in the back. Not the Trojan prince, our dog. One of our dogs. Up I get, groggy but game. Paris and Salsa, her sister, come downstairs with me. Staying behind are Max, very old crippled beagle; Gallant, Paris’s brain-damaged son; and Greg, lovely human partner. I turn on the coffee I readied last night, open the door to the screened porch that leads into the dogs’ fenced-in yard.

When I return to the kitchen, Gallant has come downstairs. I let him in—there’s a gate across the door to the kitchen that acts as an air-lock so Gallant, who is almost blind, doesn’t get out should we slip up and leave the back door open. He’s fast—Greg calls him Flash. We didn’t mean to have four dogs. A friend breeds Entlebuchers; she brought two bitches over from Slovakia and we fostered them, partly to help her out, partly because Max was lonely after our dear old Risa died. She, the breeder, was taking Gallant, one of Paris’s first litter, to his new home in the States when he ate something off. The veterinary hospital she took him to gave him an antibiotic a puppy should never have had; 24 hours later he was permanently brain-damaged. He ended up here. Max hates him—but he sure isn’t lonely.

06:15. I’m out to feed the hens, as well as Poose-poose and Ginger. Poose-poose and Ginger are feral cats who arrived in our yard in February, and had a litter of six kittens in May. We managed to socialize the kittens so that the wonderful local all-volunteer shelter (SHAID—Shelter for Helpless Animals In Distress) could take them in and find them homes. Poose-poose has been spayed; now we’re trying to convince Ginger he’d like to be neutered. He’s not keen. So far we’ve trapped two raccoons. There’s a visiting bear, too. We’ve put the compost bin in Greg’s shop.

It’s a stellar day à la Nova Scotia—warm but not hot, sunny, with a light breeze. Everything smells Eden sweet. We need rain, but we’re not desperate yet, and it’s so heavenly, who cares?

06:30. Breakfast time for me—two slices of bacon and mushrooms and an egg. I’m trying to lose weight by eating fat. I know, but it’s supposed to work. First cup of coffee, with 18% cream. While I eat, I do some on-line banking and think about all the things I have to do. I’m going to read with Frances Boyle in Fredericton at the Odd Sundays series in October, and she’ll come back to NS with me and do some readings here. So I need to contact libraries and book stores and the Writers’ Fed. (Frances has a delightful new novella, Tower, published by Fish Gotta Swim Editions, and I will have a book of poems, Salt Fires, published by Pottersfield Press.) I also have to work on a prose aubade I promised E. Alex Pierce I’d attempt for a collection she’s editing for Boularderie Island Press.  It opens with, “She’s lying awake in the charcoal dawn, before shadows begin. Nothing much to cast a shadow, anyway. Mattress on the floor, chair piled with books and yesterday’s clothes. Now today’s clothes.”  I’ve just been asked to write “something about age” for Understorey, And I’m keeping track of my day for fun and for Rob.

06:45. I hang out laundry and put another load in the washer. In between pinning clothes to the line, I throw “the dish” for the dogs. Well, for Paris and Salsa. Gallant runs around madly (“Flash”, remember), and Max stays on the other side of the airlock gate in the kitchen door, hoping for his breakfast. We have to feed him separately because he hates Gallant so much, and when food’s at stake, he’s merciless. “The dish” is a cheap steel bowl that flies through the air like a Frisbee. Paris invented the dish game. She doesn’t really need me to throw it, but she likes me to. She is perfectly happy to toss it in the air herself, and/or scoot it between her legs like a pro quarterback. While she does that, Salsa runs in circles around her, with a rock in her mouth. Don’t ask—I have no idea.

07:30.  The dogs get their breakfast, and Greg gets up. Jacob, a hard working young man, has arrived to cut up the ten cord of hardwood that will feed our outdoor furnace this coming winter. Strange to think of winter on this stellar summer day. We’re investigating getting a new furnace/heat pump, because the neighbour who brings our firewood is 84, and starting to think about retiring. Easy to see why I want to write “something about age”.

08:30. I’ve been writing this steadily for an hour. I’m at the kitchen table, which is horribly untidy. I’ll take a photo, and share it, to my shame, because I promised myself I would do and be exactly as I do and am. Otherwise, what’s the point? You could make up your own story. I wish I were tidier, but not enough to make it come true. I’m at the kitchen table for two reasons. One is the dogs. My “den” (AKA “the hell hole”) is upstairs, and Greg wouldn’t be able to sleep if we were all up there, as I would have to be clumping up and down stairs to let the dogs out and in, which also means I wouldn’t get much writing done. And, two—well, it’s “the hell hole”. My desk is even worse than the kitchen table. Both do get tidied, but not often enough. Greg is tidier than I am. Right now he’s tidying the kitchen.

09:45. Still working on the aubade, but just now made an appointment with our doctor for prescription renewals, thanks to a reminder on my cell, then went out to get the eggs (only eight hens this year), hang up a load of laundry, throw the dish again. Answering emails, arranging for visits with cousins who are “home” briefly from far away. Watching CNN to hear about the Trump-Putin meeting.

11:00. Just sent an email to The Box of Delights Bookstore in Wolfville, to ask if a reading for Frances and me on October 27 might be possible. Now Greg and I have to go to the bank in Bridgewater, a half hour away, to get money for the young man cutting up the firewood, and do errands. Back about 14:00. That’ll be pretty close to the end of my writing day, except for more emails and phone calls to ask for reading times, and finishing this. If I have a deadline, I work all day until I can’t think any more. If I don’t, I fit it in around dogs and hens and feral cats and food, exactly like today. And I’m done! 15:52. Cheers!

Janet Barkhouse’s poems have been published across Canada in such journals as CV2, TNQ, Riddle Fence, and the Literary Review of Canada. Her debut collection of poems, Salt Fires, will be published by Pottersfield Press in the fall of 2018.  It follows on two chapbooks, Silence; and Sable Island Fieldnotes, with photographs by Zoe Lucas; a docupoem short screened at Lunenburg Doc Fest 2017; and three children’s books. In 2013-14 she was Artist in Residence with her daughter, singer-songwriter Alex Hickey, at Dalhousie’s Medical School, through their Humanities-HEALS program.