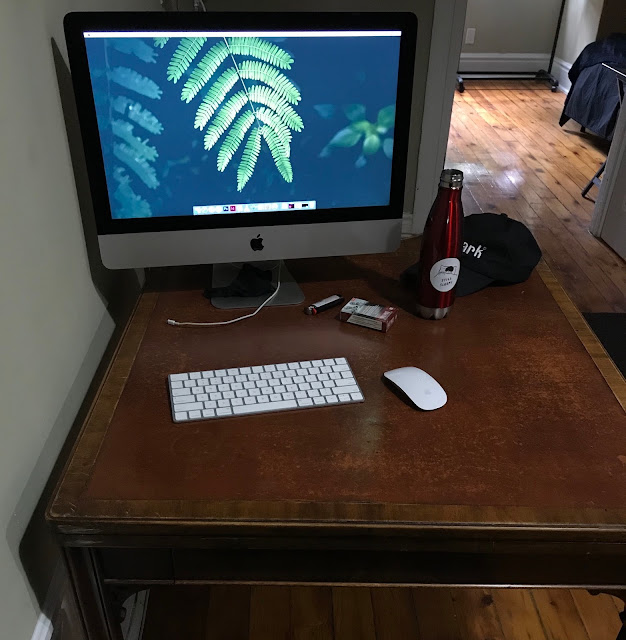 Around the same time I started writing seriously I heard a story about Friedrich Schiller who wrote with a bundle of rotting apples stuffed in his desk drawer. I liked that story and thought maybe I should be like that. Now that I’m older and don’t care as much about creative affectations, peccadilloes, or just plain fastidiousness, there’s not really a single thread of consistency through my writing day. So I’ll choose a random day where I think good work was put down.

I get up at 5am and immediately make coffee and smoke a cigarette. It’s winter and cold and still dark so I won’t be able to see the sun rise until much later. I don’t care and I don’t write yet. I sit at my desk and immediately navigate to YouTube and spend as much time as it takes to think of an old song I really liked when I was a teenager. I find it. It’s “On a Ship to Bangladesh” by Three Mile Pilot. I listen to it once, twice, and a third time. It’s really good and it makes me feel…purposeful. I navigate the related videos to see if anything triggers my nostalgia. Not much. I open iTunes. I find the album Prowler in the Yard by Pig Destroyer and listen to the song “Starbelly”. I listen to it a second time. Coffee is drunk. Time for another cigarette. More of the same music follows. I don’t write yet. I decide it’s time to smoke so I roll a large joint, smoke it, smoke another cigarette, and listen to “Timber” by Kind of Like Spitting. It’s a sad song. By this time I go and clean myself up. I don’t write yet.

My bus is leaving soon so I get ready and head straight to the Greyhound and hop on a bus to Niagara Falls, only a short trip from Toronto where I live. I pick the Ramada Hotel on Niagara Parkway near Dad’s Diner. First I go to Dad’s Diner and order the biggest breakfast they have—3 eggs, bacon, sausage, home fries, toast, fruit—and eat it, drink more coffee, watch a table of 3 really old couples do the same. I don’t really stare but I am aware of them and try to eavesdrop. Nothing too interesting. I walk to the hotel and its fucking freezing. It must be 25 below. I check in, get to my room, unpack my laptop. I open the curtains to a view of the hotel parking lot with frosted cars rotting in the frigid air. A decent image, I think, but ultimately played out. I don’t write yet. I turn on the TV. It’s the weather channel.

I only have the room for one night so I think I better get cracking. I strip down and take a shower. It’s as hot as possible. I have always liked taking showers in hotels. I think because it’s an unfamiliar place. I finish and go outside and smoke more cigarettes. Back inside I stare out my window more and for longer periods of time. Nothing outside has changed. I don’t write yet. I start channel surfing and do that for hours. I watch sitcoms, soap operas, even the news. I watch anything at all until I fall asleep. I wake up a few hours later and watch more television for hours more. I stare at my laptop. I stare out the window. Smoke more cigarettes outside. I listen to “Cherry Tree” by Xenia Rubinos. I left all my pot at home.

By the time the sun is going down I am hungrier than hell. I explore the hotel welcome package for nearby restaurants and order a large pizza and box of cheesy breadsticks. I stare at my laptop. I put on more music: the album The Ascension by Glenn Branca. I eat half the pizza and I am exhausted. It is way too much. I shut the curtains and crawl into the bed. I leave the TV on so I can hear the sounds wash over me as I fall asleep at 8pm. I haven’t written a word.

I wake up feeling disgusted. I need to get out of here immediately. I get lucky and there’s a GO Bus leaving in an hour, so I check out and walk to the station. It’s still early. On the bus I think of the old couples sitting at Dad’s Diner and write a few stanzas about them in my phone. I write about what they might have been talking about and imagine their lives, past and present. I save the note and don’t look at it again until weeks later. It takes only an hour or so to work the stanza into a full poem, edit it, feel happy with it. It’s a good work, I think, such as it is. I never submit the poem to a magazine and never look at it again. I still have it saved on my computer. It will never see the light of day.

JC Bouchard’s poetry is forthcoming in CAROUSEL, and has appeared in carte blanche, PRISM international, The Puritan, and Arc. His first book of poems and photographs, Let This Be The End Of Me, was published by Hybrid Heaven Press in spring 2018.
at July 11, 2018