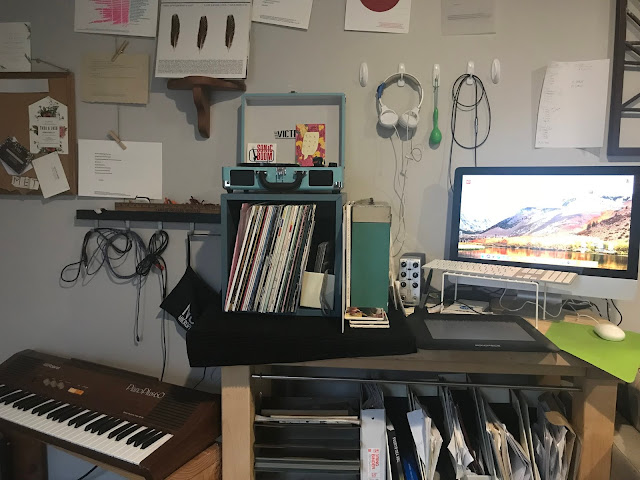 I used to talk all this shit about how I didn’t have a space or time to write and that I wrote whenever I could. But teaching creative writing taught me that, duh, people need different things for their art. Some people need quiet and a schedule. Some need to be alone. Some need to be around others. Some need noise. What I figured out was that I needed to be moving to make, not because of my writing style, but because that’s how I function.

As a father, I’ve found that time vanishes. Early in the morning or late at night there’s still so much shit to do, dishes, cleaning, showers, walking a dog, feeding the cats, calling someone you’ve been meaning to call, dashing off emails, spending time with your person. Early in grad school, I realized that I wouldn’t have any scheduled time to write, so I started writing everywhere and whenever I could. On transit, in class while my students were working, at lunch, during a reading, standing at the bus stop.

So early on I adapted to this rapidly changing life and it’s been the same since. But I have tried scheduling times to write: getting up early, writing right after dinner, writing during my lunch break, writing everyday at sunset, or whatever. It always felt labored. As a teacher, I started holding workshops outside of the classroom to challenge students to write outside their comfort zone. I held classes in the letterpress studio, in theater, in a kitchen, or the book-binding room, or in the hallway, on the sidewalk. I would ask my students to write in these spaces, but I knew that for most of them, these weren’t their spaces or wasn’t their approach.

Back then, there was this urge to create as much as I could and everything poured out of me for till about three years ago. I stopped writing. I just couldn’t. Poetry anyway. I couldn’t write poems. So, pretty soon, I started focusing on writing “other things.” Plays, screenplays, fiction, essays. I started working with film and actual paper. I started composing music again. This process of moving between modes led me to where I am now. 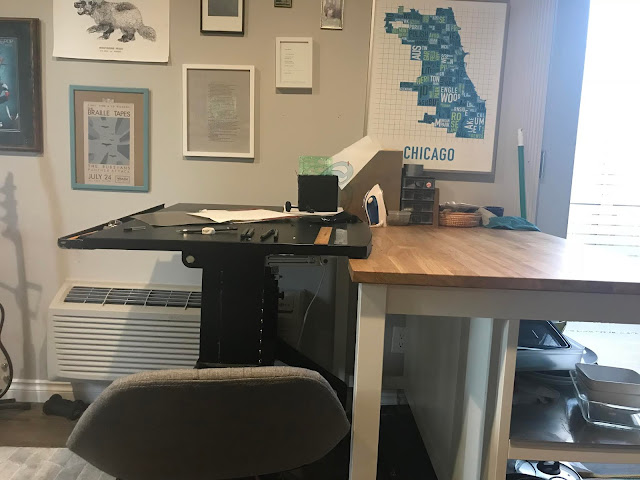 I wrote my first poem in three years in mid-June (I wrote it for someone, so…). I still write in short spurts. Ten minutes here. Five minutes there. My Dropbox and desktop is a wreckage of pieces. Every few months I go through all my pieces and see what’s related and what’s not. Sometimes I print them out and cut them up and start putting them on my wall or my floor. Sometimes I just copy and paste and delete and so on. Because of my process early on, my writing is always part of movement. It’s about finding the time to put something down on paper/screen. Whereas, actually putting the project together requires time—late at night while I’m watching Harry Potter for the 1000th time, I start carving a manuscript out of what I’ve gathered.

But in my shift in focus to other media, I’ve found that I needed to carve out time. And I’ve found myself with more time to myself. This forced me to schedule time. It’s not set in stone, but after dinner every night that I’m home, I work for at least an hour on something. It can be a poem-film, or drawing, or composition/music, or writing, or making dinosaur dioramas. This is for making only. Editing and revising is a-whole-nother beast and takes place on the couch with a computer on my lap.

When I work on media-focused projects: film, audio, and design/art, I stand at my desk. This is an old Ikea island that my ex gave me. I sanded it, stained it, and repurposed it for this kind of work. I have my computer, interface and hard-drives, and records/record play on top. Underneath are folders of drafts of manuscripts, shooting scripts, drafts of drawings, references for project, project bibles, and one of two organizers that are straight up chaos.

When I draw or ink (or writing/outline by hand), I sit on my tall chair at this drawing table. My friend, Carrie, who is a color-dye artist and visual artists. She manages a studio space called Studio 18 in Sodo. Anyway, she sent me a text one day with a picture of this: “You want this?” She brought it to the studio space and it took me like two months to drag it home. But it’s been really important to my creative process.

I practice music and will eventually use Studio 18 space to prep this big project I’m working on, but for now, I just play music and sometimes help Carrie work on projects there.

I found that all of these nooks/spaces offer a different sort of output when I’m working within them.

And sometimes, nothing works. Or I spend an hour on something and it’s dumb.

Sometimes when I feel stuck, I go outside and walk around West Seattle. I listen to Spotify—to young bands who are doing what I used to want to do in my 20s—and I walk. Occaisonlly I’ll write down ideas or edits or thoughts, but mostly I just walk.

At the end of the week I go through my phone notes and consolidate them into one big note. Then I transcribe it into my notebook. And keep re-transcribing as it edit till it’s ready for the computer.
For all of my projects, I write and iron over, or carve it down till it’s the most minimal version of itself, then I build it back up slowly.

Sometimes my son works on his Avenger Pets comic while I write or draw or edit. Sometimes, I get two minutes in and he wants me to work on Avenger Pets with him, or do another version of his Jurassic World posters.

The more I talk about writing and the more that I insist that my writing life is chaos, the more I realize that it’s not. It’s a pattern and I have my spaces. I have my routine. The difference for me is that it’s constantly evolving around my needs, and even when I’m not writing, I’m making something, even if it’s dialogue about Thanos’ pet Peacock.

Joshua Young is a poet, playwright, and mutlimedia artists living in Seattle. He is the author of six collections, most recently, Psalms for the Wreckage (Plays Inverse Press 2017). His work has appeared in Gulf Coast, Puerto del Sol, Court Green, Fugue, Salt Hill, Bat City Review, cream city review, Nightblock, Vinyl, among others. His feature film, Do You See Colors When You Close Your Eyes?, was official selection at the Seattle International Film Festival, Athens International Film Festival, and Montreal International Black Film Festival. His follow up, Into the Lavender Creases of Evening, was released in 2016. He was recently rewarded a grant from the Reva and David Logan Arts Foundation for his multimedia, cross genre work.
at July 07, 2018