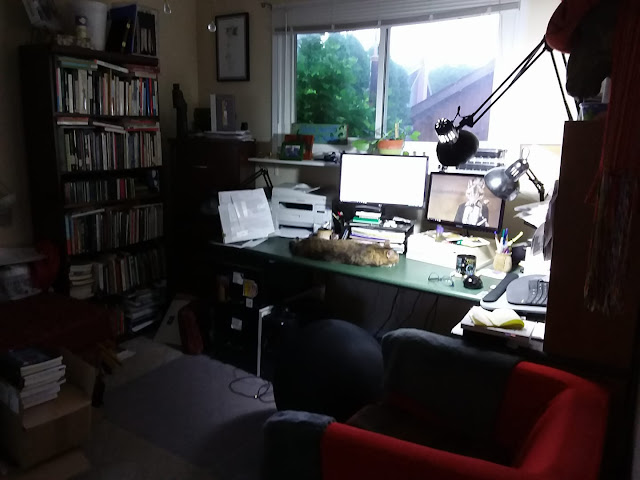 Whenever I catch sight of my office off-guard, out of the corner of my eye as I head down the hallway to do something else, I feel lucky.  My office is the room of one’s own that Virginia Woolf talked about, and I make 500 pounds a year (okay, more) by my own wits. It’s a converted bedroom at the back of the house, crowded with books and desk and comfy chair. I don’t sit in the comfy chair; I’ve got a stabilized yoga ball chair where I sit.

On the best days, that room of my own is my hard-won sanctuary. On the worst days, it’s where I sit and wonder how so much time has passed. Chelsea Hodson’s essay “Trying to Write Down Life Before It’s Too Late” on Lit Hub spoke to my anxiety about writing and not writing. My writing day is prosaic but it gives me access to what is glamorous: that is, the inside of my head. Annie Dillard asserted in Pilgrim at Tinker Creek that she wrote in a room without a window facing a cinder-block wall so that she could have undistracted access to her imagination. Do you have the right writing space? Maybe. What is the inside of your head like?

The biggest change to my writing day came at the advice of my doctor, who told me that the pain I’d been feeling for five years was not due to poor ergonomics or simple aging, but because I was in the early stages of degenerative disk disease, a condition so alliterative I think it must only affect writers. The cushioning disks between my vertebrae were wearing thin. My doctor gave me glucosamine, the instruction to ingest a lot of calcium and vitamin D, and the irrefutable caveat that I must stand up from the computer screen every twenty minutes. I was aghast: my process! The interruption! But soon, standing up became as necessary as any other part of my process. Standing up did one very necessary thing: it alleviated pain and that was very good for my thoughts. For me, sitting is the new shrieking.

Many descriptions of a writing day favour the morning: you know, a writer gets up in the morning and starts their day off by pounding out 1000 words. There’s not a thing wrong with that: if the circumstances of your life allow it, if you are savvy and lucky enough. But my brain doesn’t work that way. Sure, I’m freshest in the morning, but that’s not when my writer’s mind is sharpest. In the mornings, I have a wide-awake analytical brain, so mornings are for TCOB, every day, every way. Mornings are for arranging, organizing, evaluating, emailing, brainstorming, nailing down details, checking off items on to-do lists with a little social contact, and maybe drinking a hot beverage while staring out the window. For me, the writing does not happen if I am thinking about other things. I’ve got to clear the cache to get to the material.

When asked at a speaking appearance a little while ago, David Sedaris said that his favourite time of day was 8:30 at night, because that was when he had lived a whole day, walked and picked up trash and talked on the phone and cooked and eaten dinner, cleaned the kitchen with his partner and at 8:30 Sedaris could go back into his office and write up the day. Sedaris’s essay “Day In, Day Out” in Let’s Discuss Diabetes with Owls is devoted to discussing the benefits (and pitfalls) of writing up the day. I don’t go as late as Sedaris; my sweet spot is sometime in the afternoon – maybe 2:00 or so, when something stirs in my writer’s brain and strikes a tiny gong. It’s time, it says, time to write. There are days – many of them – when the gong sounds and I can’t answer it. Sometimes I teach at this hour of the day. Sometimes I’m in a meeting and if so, then my meeting notes are crosshatched with writing ideas because it’s the hour of the day when I find nearly everything that comes out of people’s mouths punny or metaphoric or a nudge towards the missing thread of the essay I’ve been writing.

I know this is unromantic in the extreme. We’ve been psychologically primed to honour the pristine potential of morning, the idea of writing all morning and standing up and stretching at 11:00, checking your word count and thinking, “That’s a good morning’s work.” It does sound great, and it also sounds like a REAL writer’s life. Maybe that’s because every white male novelist in mid-20th century America claimed to work this way, with a door shut against children and distractions and a wife bringing coffee and cookies for that 11:00 break. (I remember reading that thing about cookies and coffee years ago and I won’t look up the writer who said it because I don’t actually believe it.) I’m not immune to the inherent romanticism of this, and I also know that this is not my life. I am a writer who bursts from her everyday responsibilities like a bell has been rung, the bell that says “that is enough reality that for now.” If there are too many days in a row when I don’t pay attention to the bell, I’ll start to feel it and wonder why I am so grouchy. Just as I have to ask myself when was the last time I ate (hello, low blood sugar) or the last time I was outside (serotonin uptake, check), I have to ask myself when was the last time I wrote. Because if I have to clear the cache of everyday detail, then I also have to clear the imaginative cache: the lyric load, as it were.

I know that writers are interested in how other writers do it. It’s a question that I hear from beginner writers all the time; people crave confirmation that they are already doing it the right way. No one likes the answer that there isn’t a right way to write; if you are writing, that’s the right way. Maybe a more useful question, the one people really mean to ask is about options: is a better method out there that they could/should/might adopt, or at least think about? Because every time I think I’ve discovered the optimal conditions under which I prefer to write, something happens to change my mind.

I love to write with others. I sometimes meet with a group of writers to write for two hours. We meet up, open our notebooks and tablets and write: that’s it. This is known by various names. I attended one called “Shut Up and Write” in Vancouver, invited by writer Jane Eaton Hamilton. You don’t need to know anyone to attend. No one will teach you or mentor you or make you write; you could just sit and stare into space for two hours, but that’s so boring that odds are you’ll write. It’s hard to explain until you do it; why should being in the room with other people writing get you to write? Logically, it shouldn’t. But don’t pay too much attention to logic.

I love a deadline.

I love writing projects that demand directed once-a-day writing. A month is usually the longest I can sustain one of those. But I’ve written a poem a day during April as part of NaPoWriMo for the past six years, and more than once have produced book chapters by adhering to a strict 800 words-a-day-or-die rule for three or four weeks.

I love to revise, and that’s when morning works for me as a writer. Because revision is detailed, painstaking, and distracting with its many needs. And I do sometimes write in the late evening, when I have shut down every other thing. This is a good time to turn to something I’ve struggled with writing, with adapting, with changing and allow my tired brain to call it out: nope, stop pussyfooting, say this and this and this. Enough prevarication.

I love when my writer’s mind won’t stand for any niceties.

I love when my back lets me write.

I love when my afternoon mind kicks in.

Tanis MacDonald is the author of three books of poetry and one of creative nonfiction, Out of Line: Daring to Be an Artist Outside the Big City (Wolsak and Wynn 2018). She was a finalist for the Gabrielle Roy Prize in 2013 for The Daughter’s Way and was the recipient of the Robert Kroetsch Teaching Award in 2017, and the Faculty of Arts Teaching Scholar Award at WLU in 2018. She is also a co-editor, with Rosanna Deerchild and Ariel Gordon, of GUSH: menstrual manifestos for our times for Frontenac House (2018). Widely known as a scholar and a reviewer, her fourth poetry book, Mobile, is coming out with Book*hug in Fall 2019. You can find her at www.tanismacdonald.com.