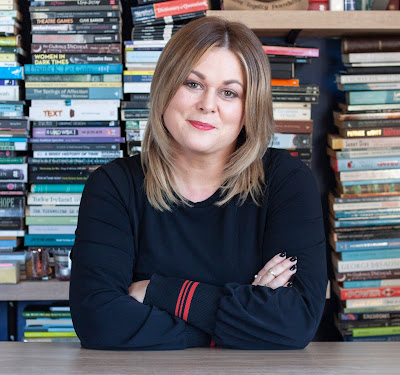 I haven’t a typical writing day. I have no routine, no favorite pen, no set times, no set ideas. I’ve taught in the same town for eighteen years, and that’s a routine, so I like to be entirely unpredictable at every over opportunity I have. I love new poems, when they come along. That’s at any place or time, and I’ll usually write a note down of the idea. When I am in the middle of a project, I feel like I did when I was a new mother, traumatized and all over the place, and I find it hard to deal with the intrusions of everyday life when I’m in this headspace.

But a couple of years ago, taking myself incredibly serious so I bought a desk, a good lamp and a swivel chair. And in the vein of many great man poets before me, (I had just returned from Thoor Ballylee) I told my children that they were neither to interrupt me nor touch anything on my space, or there would be consequences. It seemed my life had been taken over with domesticity and children and work and pets and chores and there was a dinosaur or a football or a yogurt carton on every workspace I ventured near, and usually, out of exasperation, I’d give in, or give up.

But I’m going to give you a typical day, when I’m not teaching, (usually summer holidays) and I’m mid project and stressing about time.

I say goodbye to husband (who’s off to work. With people and lunch alone and no children) I like to get properly dressed, this includes lipstick. I make coffee, drink water, let out the cat, feed her, tidy the kitchen and hope the children stay asleep for three hours. I water every plant and flower that needs it. This is a long process.

I am mid way through emails, bank statements, bills, and friends’ texts. I deleted Facebook years ago, though I know trawling through Insta and back to Twitter, I’m forgetting something. I am locked out of Twitter, as my youngest son keeps a tight leash on my social networking time. But I know the password. It’s JeffyPencil. I gawk around on this. It’s 8.30 and I want to stick a pencil in my eye. Someone somewhere on Twitter has won something amazing. Someone else has just been published in the New Yorker. It’s good. I congratulate them. The coffee is coming back up, so I’ll eat a yogurt to settle myself. I pull a book off my bookshelf. I read a page. Then another book. I check my bookmarks on it. And wonder why I bookmarked that particular page.

Fixation on Yeats. And begin reading him, usually. To edit him. It’s the trip to a tower. I should have a tower.

Novel manuscript looks like a mountain, I flick thorough it, and it leaves nice paper cuts.

I think about my husband and the way he’d edit, if he were a writer, so I go to his desk and take his black pen. Danish I think, though it’s possibly Swiss. He wears headphones as he works, I consider this, but random lines of songs make there way into the narrative.

I read the first page. Novel title and my name. I hate it. I decide it’s the worst thing ever written. But I think of Stephen King, and his Nike approach to working. Just. Do. It. I text husband and tell him I can’t be a writer if I’m a teacher. Stephen King says so. That’s where I’m going wrong. Text back tells me that I’m on three months holidays. Second text. Go work in a Laundromat like King, might encourage you.

I continue editing longhand with the fancy pen. I light a candle, then another one. I am not in the least religious, but I am incredibly superstitious. I summon a chat with my dead granny and we have a laugh.

The edits are done. All ten pages, another 300 to go this week. I have one week for this job. And I’ve to write a poem. I think of O’Hara saying coke. I think of this everyday. Or how I’d like to go to a gallery now. Eat another yogurt.

I make the children lunch, put on a wash, hang out a wash, hang up a picture, put on more lipstick, polish the TV, clean up after lunch, send the younger child on the trampoline for exercise, I water all the flower pots, I wash the windows of the room I work in, later in the day as the evening sun comes down the streaks will make me go mental.

Older son takes off on a cycle. I consider throwing holy water over him like my mam did to me, but I worry incessantly until 6pm about him instead. Younger son is still in his pajamas. Husband rings for a ‘chat’ he’s been for a walk and finished a project, launched a website, did the grocery shop and is feeling good. I mummer something about the ten pages.

My mother texts to say she’ll pop in after work; I’ve an hour and a half. Fuck.

My friend texts to say something important.  I turn the phone off. I turn it back on and make a nail appointment. I read some poems on line.

I write a poem, it’s not great, but it’s a skeleton, that’s all I need. I feel some relief; I have at least a half-baked original idea. Younger son wants to go to the playground. In ten minutes I promise. I hang out more washing. I wash the floor. I do twenty minutes of edits. Ten more pages. Plod Plod Plod

Mum calls in. I cook dinner, son arrives home off bike, not injured and I am relieved but I play it off as if I don’t even notice his arrival. Husband arrives home, and I’ve burned the rice. He blames the bad pot. I blame the desk, I had just popped back for a minutes. Ten more pages. I like working in tens. I read aloud the idea for the new poem, early draft but he likes it. I take early draft to mean an insult. I abandon it. Husband’s had a good day. I’m thrilled. I load the dishwasher, he helps, but his presence is in the way. His encouragement is irritating.

Should we have wine? Let’s have wine. I fall asleep at 9 and wake up with headphones on and some Netflix series about the DeMedici’s is playing in the background.

11.30pm
Everyone is asleep except the cat and me. I edit again. There’s a page or two I like. So I’ll stick with it.

I consider shoving chair up against the wall. Like Stephen says. But now I look out the windows, see the hand torch of my neighbor, checking his stock.

3am Everyone dies at this hour, or so they say. So I sleep.

Elaine Feeney is an award-winning writer from Galway. Rise is her third full poetry collection following Where’s Katie? (2010) and The Radio was Gospel (2014), all published by Salmon. She published her first chapbook, Indiscipline, with Maverick Press in 2007. Feeney’s work is translated into over a dozen languages and is widely published. In 2016, Liz Roche Company commissioned Feeney to write for a national production to witness and record through dance, film and narrative, the physical experience of being a woman and bodily choice in Ireland. Entitled Wrongheaded, a film of the same name, directed by Mary Wycherley, accompanies the production. It premiered at Tiger Dublin Fringe Festival and was shortlisted for London’s Underwire Film Festival Prize and Bucharest Dance Film Festival Prize 2017. It is currently touring internationally. Feeney has just finished both a pilot comedy series, The Fannypack, with writers Aoibheann McCann and Aoife Nic Fhearghusa, which was highly commended by BAFTA, and her first novel, SIC[K]. She intends to take a break now and perhaps keep bees or make furniture.
at August 10, 2018