“How we spend our days is, of course, how we spend our lives.” I once called this statement by Annie Dillard to mind daily. However, this mantra has soured as I’ve grown older, as I now cannot help but feel the tug of productivity, the dissection of time into manageable segments, latent in its profundity. When I first heard it some years ago, its self-evident logic felt like truth: of course, time unfolds moment by moment and the sum of those moments constitutes our lives. Now, I resist its simple arithmetic: the idea that a whole is merely the sum of its parts, that a whole exists at all. What about the unmeasurable movement between hours and days, how other people spend our own lives, or how parts accumulate and exceed the shapes we’ve established?

Last summer, I set out to find a new mantra of dailyness. Of parts and wholes and the spaces between them. Most of our lives are measured by the hour: the wage-hour of making a living that prevents us from living a making. I wanted to investigate this measured labor in poetic form, but to do so I needed a residency—time paid for off the clock. Thus, I spent the month of July 2017 in residency at the Vermont Studio Center, where I made a chore of the thing that once released me from the mundane repetition of living.

My project “Diurne” progressed according to the following procedure: For the entire month of my residency, I wrote a line / segment / sentence every hour that I was awake. The first thing I did each morning was grab my notebook and write something. Sometimes it was a half-coiled dream that unraveled as I wrote. More often it was simply about the sensation of waking up. The only rule I maintained was that every hour I had to write…something. The results, you can imagine, were mixed. Sometimes, with nothing to say, I recorded the words of others: a book I was reading or people I overheard. Sometimes I simply commented upon the previous day’s record, remediating it rather than feigning inspiration.

As the days accumulated, I established a new routine: every morning, after writing my first line, I would read back through the previous day’s record, transferring lines from notebook to computer, revising and cutting here and there but never rearranging the hours they registered. This work was a tender balance of wanting to preserve the record of making while also recognizing that the language I had at my disposal after three drinks at 11pm was radically different than my usual range. These “poems” hung together as units because of their production, rather than any particular theme or affinity. They charted my mind and how it interacted with information throughout the day, even at its most uninspired and lackluster moments.

Below is an image from my notebook on day two, with the revised and typed excerpt next to it: 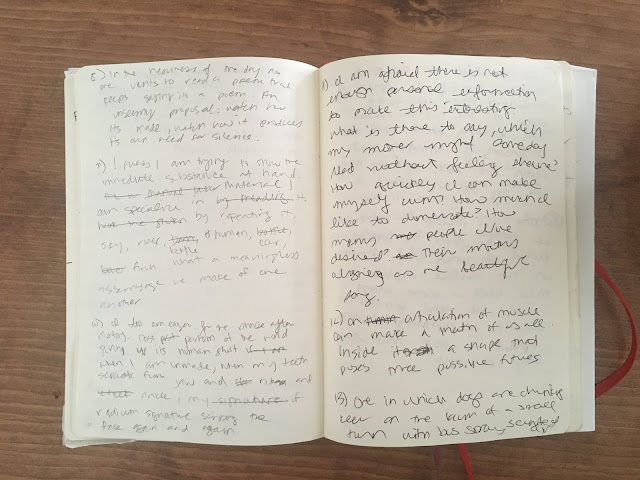 I am told no one wants to read a poem that keeps reminding them it is a poem. You should take a nap instead.

When I am unmade: teeth radiating their signature after history. Postpartum of the world finally giving up its human.

One that defines the human by sealing it shut: flesh into stone, which we say we are least like

One that turns earth outside-in, burial of shit that drifts on the surface

Method: I pulse the structure that subsumes me

Writing “Diurne” helped me debunk the myth of lyric immediacy I often confronted in poetry by making the writing process durational rather than inspirational, work rather than epiphany. It was a project weighed down by mediation, that often had to muse upon its own making as a way to pass the time, that could not erase the traces of labor that kept it pinned to the ordinary. In short, it became about the labor of art and the art of labor. As part autobiography, part journalism, part theory, part apology for not being poetry, “Diurne” accounts for how I spent my days while resisting any arithmetic that might try to make of it some greater whole or meaning.

After I completed the project, I luxuriated in not writing every day. At least not every hour. The sensation was similar to when, as a child, my sister would pin my arms to my sides as I strained to raise them. Once released, my arms would float upward as if by magic. The buoyancy of my own coiled energy had gained a life of its own beyond my will. The sensation spent me, rather than me it. This feels like the truer gesture of making. 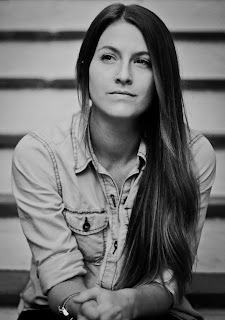 Kristin George Bagdanov earned her M.F.A. in poetry from Colorado State University and is currently PhD candidate in literature at U.C. Davis, where she is writing about cold war poetry and nuclear power. Her first full-length poetry collection, Fossils in the Making will be published by Black Ocean in 2019. Her poems have recently appeared in or are forthcoming from Boston Review, Colorado Review, Zone 3, and Puerto Del Sol. She is the poetry editor of Ruminate Magazine. More at: kristingeorgebagdanov.com / @KristinGeorgeB