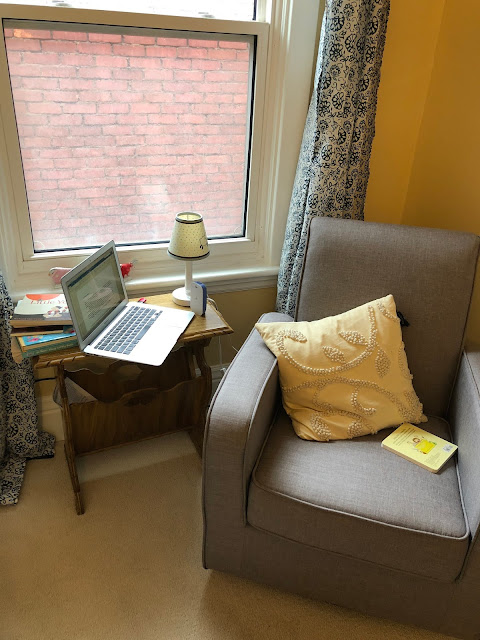 I give my three-year-old the tablet and tell her to pick a show; I give the baby a bath and nurse her down for a nap; I give myself a shower. As I’m toweling off, my husband, who works from home, knocks gently on the door. He has to reset the router, which, due to the age of the house, is installed in the baby’s room.
Water pools around my feet. “But I have to work on an essay.”
He’s apologetic – he has a video conference scheduled. While I dress, I listen to the baby fire up. Judging from her cries – more fuss than need – she will likely go back to sleep.
I grab the laptop from the kitchen and sit on the couch. My phone is unmuted beside the keyboard; my seven-year-old is at summer camp and she’s been having a hard time adjusting. My three-year-old comes down the stairs, scowling at me, wooden spoon clenched in one hand, tablet in the other: “What are you doing?”
“Writing,” I say. She crosses her legs beside me and puts on Super Why.

I wrote most of my first book in a room of my own, fueled by walks along the beaches or hedge-lined sidewalks of Vancouver; I wrote my second book in strategically-timed bursts, mostly on crumb-covered tables in Starbucks, after I had exhausted my baby at one of the parks in our Toronto neighbourhood.
In Vancouver, I was a grad student and it was my job to write a book. I hadn’t lived in an urban environment before and I was a flaneur not only of the city, but also of my own writing process. What would I need to write a poem? I was hilariously happy at coming across an office chair parked next to a piece of driftwood, a tree planted in the trunk of a car; I was always searching for inspiration.
When my second daughter was born, in Toronto, I felt a surge of energy that I figured was probably another book. But that inspiration was capped off by the logistics of having a baby and a kindergartner, part-time work, and no money for childcare. I managed to find a way, when my oldest child was at school, that I could write. I started meeting up with friends for playdates at parks. The second the baby got good and sleepy, I’d pluck her from the swing, say goodbye to my friends, consult the app and race to the nearest green mermaid. I’d order a decaf coffee, unwrap a squashed sandwich from the stroller basket, plug in my earphones and open my laptop, working from notes I’d written in snatched moments earlier at home. The only problem was my low caffeine tolerance – even two cups of decaf gives me the jitters – so I had to get good at stretching out a cup over a two-hour period. I sipped slowly, periodically rearranging napkins on the table. As I wrote, I rested my right foot on the stroller wheel so I could jiggle the baby back to sleep during the lunch rush – lines of office workers grabbing salads, gaggles of kilted teenagers ordering cups of whipped cream – my hands hardly left the keyboard.
Sometimes my strategy didn’t work. It would be too quiet and she’d wake, grouchy, and  I’d end up spooning warm yoghurt (also from the bottom of the stroller) into her mouth, wiping it from the seat, picking up the cast-off spoon. Sometimes, she would stir, squawk just a little,
and a well-intentioned but clueless person would materialize beside me and bellow into the canopy, “Someone’s up!” Sometimes I just drank my coffee.
When my baby reached eighteen months and I had received some grant funding, I found a daycare that could take her three morning a week. After drop-off I’d run up the street to the library for three hours of guaranteed writing time. It didn’t matter that the guy next to me was watching chainsaw demo videos on YouTube – I tuned it out. And when the morning was over, my baby was so tired she’d crash pretty much the second I strapped her into the stroller, which, followed by the coffee shop routine, got me another two hours. Often I’d barely make it back to my oldest daughter’s school in time to pick her up.

Since my third baby was born in February, writing hasn’t happened without a complicated orchestration of child naps, television, and snacks – and even so, often falls through. Part of my writing process these days is dealing with that disappointment, not with the writing itself; however, it’s helpful somehow to acknowledge that not writing hurts. I recently read a profile of musician Father John Misty, who said that “songwriting is like encountering a bear in the woods.” I know that feeling so well. I console myself with making quick notes, here and there, when I can. There’s lots to take in: the dusty guitar at the top of the stairs has been stuffed full of crayons.
But I’ve recently finished editing my second book, which I moved from coffee shop to my baby’s room. I worked mostly in the glider, breastfeeding her, one hand between her little shoulder blades and the other on the keyboard. (I was very tired; my editor was very patient.) These are the moments when I’m so glad I don’t play the pedal harp; I can pretty much write anywhere.

After my first baby was born, I wrote, but not much beyond basic recording. I had no idea if I would make poetry from what I’d written in the small notebook I kept next to the glass of water on the bookshelf. I’ll confess that I was a little in awe of what I’d written, not because it was any good, but because sleep deprivation had produced some amazingly wild stuff.
Now I’m whisking cheese sauce on the stove and hollering over the hollering baby strapped to my chest – “Hey Siri! Make a note!” – because my older children have wandered off with the ballpoint pens so they can write on the furniture.

Elizabeth Ross is the author of Kingdom (Palimpsest, 2015) and After Birth, a second poetry collection forthcoming in the spring of 2019. Her work has been published in literary magazines across Canada, longlisted for the CBC poetry prize, and selected for inclusion in The Best of the Best Canadian Poetry in English. She grew up in Victoria and now lives in Hamilton, where she’s working on a collection of essays.
at September 09, 2018