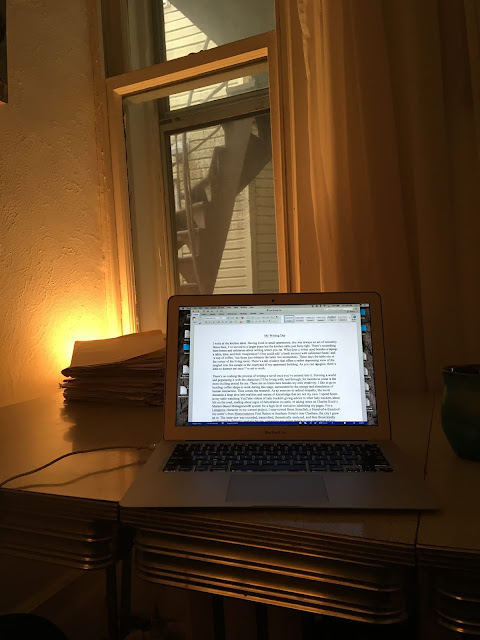 I write at the kitchen table. Having lived in small apartments, this was always an act of necessity. Since those days I’ve moved to a larger place but the kitchen table just feels right. There’s something utilitarian about writing where you eat. What does a writer need besides a flat surface, a laptop, time, and their imagination? (One could add ‘a bank account with unlimited funds’ and ‘a cup of strong coffee,’ but those just enhance the latter two necessities). These days the table sits in the corner of the living room. There’s a tall window that lets in some light and offers a view of the tangled iron fire escape in the courtyard of my building.
Like many writers, I thrive off of routine. Unfortunately, being a sessional language teacher means never knowing what my schedule is going to be, so my writing days morph from semester to semester. My chosen career path has its ups and downs, but I accept this precarity in the knowledge that at least I’ll have time for the work that feeds me creatively. Luckily, this fall I have a contract that gives me mornings: wake up at 6:30am, matcha tea with breakfast, prep my class to get it out of the way, brew some strong coffee, then write, write, write.
As precious as writing time is, I do spend a disconcerting amount of it staring out at the fire escape. Thinking time is a necessary part of productivity, of course, but this is also when it’s easiest to jump over to social media and waste countless minutes scrolling through the newest #Canlit drama. I’d like to say I have boundless willpower, but if it weren’t for the app, Self Control, I’d be a total slave to social media. Sustained attention is simultaneously the most valuable and least coveted resource we have as writers in the digital age. Without it we’re basically drifting rudderless in an ocean of distractions.

Forming a world and populating it with the characters I’ll be living with, and through, for months to come is the most energizing stage for me. I like to go to bustling coffee shops to work during this period, surrounded by the stimulation of human interaction. Some may be inclined to consider novel-writing to be a form of escapism, but I tend to see it as the ultimate engagement with my perceptions of the world. The realities we weave are only as nuanced as our ability to comprehend the one we’re living in. As an exercise in radical empathy, the novel demands a deep dive into perspectives and realms of knowledge that are not my own. I spend hours at my table watching YouTube videos of lady truckers giving advice to other lady truckers about life on the road, reading about signs of dehydration in cattle, or taking notes on Charles Koch’s Market-Based Management® system for a high-level executive inhabiting my pages. For a Lunaapeew character in my current project, I interviewed Brent Stonefish, a friend-of-a-friend-of-my-sister’s from Eelünaapéewi Lahkéewiit (formerly Delaware nation at Moraviantown) near Chatham, Ontario. The interview was recorded, transcribed, thematically analyzed, and then Brent kindly confirmed the thematic analysis for me, correcting any errant details in my perception of his responses. We’ve maintained a connection throughout the process of writing my book, and become friends along the way, which has been truly gratifying. Not every character requires such an intensive methodology, but getting things right is a responsibility I don’t take lightly, especially when it comes to writing Peoples who have traditionally been so misrepresented in Western media and literature.
Then, of course, comes the actual writing. I used to get first drafts down into a notebook, but spontaneously shifted to typing them directly into my laptop for this project. I guess this was an attempt to speed things up a bit, bring my process into the 21st century, but it’s completely backfired on me. I’m spending more and more time ‘getting things right’—rewriting, reworking, and moving things around—before moving on, whereas the notebook functioned more as an initial sketch that allowed me to progress without obsessing over every tiny detail. Regardless, what I have moving forward feels more solid this way, and I’m too stubborn to revert back to my old approach, at least at this point.
Of course, writing a book is nowhere as linear as I lay it out here. Breakthroughs have a way of popping up on the metro, or in line at the grocery store, or in dreams. New characters emerge unexpectedly mid-draft, or things I didn’t realize I needed knowledge of spark a new round of research. And I haven’t even mentioned the inevitable editing stages, or the process of working with sensitivity readers that this book will require. These are waiting for me once the project is a more complete, living, breathing entity; a fallible organism animated through hours of secluded labour.
In a time of rapid-fire communication and the expectation of constant creative output, writing a novel feels a little ridiculous. Who would willingly take on a project with no clear end in sight? There’s a hint of masochism in the unabashed embrace of slowness, the dedication to progress that can only be described as glacial. (I’m a slow writer at even the most prolific of times. The fact that my current novel takes place entirely in a traffic jam hasn’t helped my perception of the process).

When it comes down to it, there is no typical writing day, just a consistent surrendering to what needs to be done, and a faith that you will one day get to your destination.

Dean Garlick is a novelist living in Montreal. His first book, The Fish was published in 2010 on Anteism Press and translated into French on Les Allusifs in 2015. His novella, Chloes, was released in 2014.