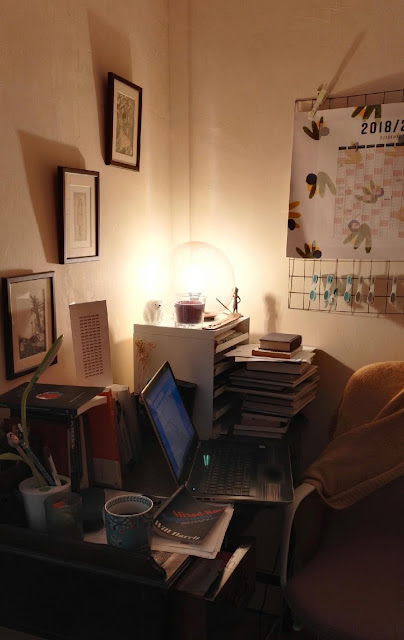 My writing day isn’t settled yet and I’m not sure it ever will be. We’ve just got a puppy, so probably not. My day relies on how she, Puffin, behaves. I know one thing for certain, I will rise at dawn and lead her under the apple tree and while she relieves herself I will watch as the light comes up and later we’ll watch the scene in reverse across a moor, the sea or tree-line. She’s not really into sunrises or sunsets.

It’s 6 a.m. after the clocks go back and Puffin and I are still sleepy under the apple tree. I watch as inky-blue night bleeds into yellow morning. In the living room there is hot coffee; a bruise on my consciousness.

Sometimes I go to London, so none of this happens. My partner gets up with Puffin and the coffee lingers in a thermos; these are the days I write on the train.
But then again, they’re not. These are the days I enjoy watching the weather, naming birds, eating crisps and having thoughts; waiting for someone to ask me to move my coat so they can sit down on this busy train heading east.

Before I moved into academia, I used to work split-shifts in a seaside bakery. I’d get up at 4 a.m. and watch the sun come up. Midnight split my writing process in two, half-written drafts of poems from the night before glower at me in the blue light of the computer screen of the dawn.

I was always late for my shift. Walking from the car to the cloam, I used to like to read the Parish notices in the morning light. During my lunch break I would walk out across the cliffs, a misshapen cheese scone in my pocket, and read my book above a small cove called Readymoney.  It’s only the forces of capitalism that made my attempts then to write so desperate. The fear that I wouldn’t have enough time in the margins of my day job to write what I needed to say; the metronome beat of clocking in and clocking out haunting me.

Six-years ago I found out that I had a place studying Creative Writing at Falmouth University. I pinned a quotation by a popular novelist to my wall to encourage me to write regularly. These words of writerly wisdom were literature’s version of Norman Tebbit’s father getting on his bike to find work, no riot, no whingeing just get on with it. Choking on the blues and yellows, I wish I hadn’t been so busy appreciating the horizon when I could have been writing it down. This morning, or one morning, perhaps even yesterday or the day before, I replaced the novelist’s advice with this: 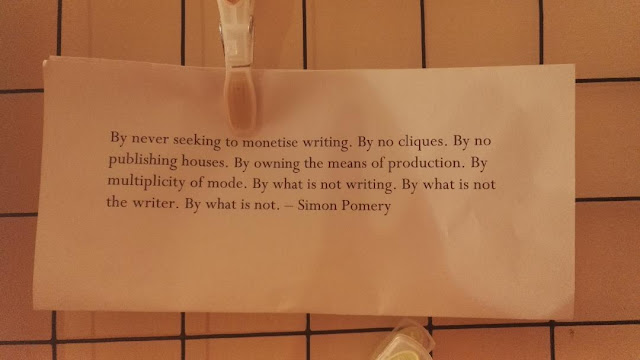 I’m still not sure what it means but maybe in another six-years I’ll pull it down and replace it with another.

For me, writing either comes or it doesn’t. The poet Robert Lax used to write what he could see when he closed his eyes; vertical lines of colours or dreams of riding the bus into the woods. The writer John Levy writes in his memoir of Lax:

Bob said he thinks the important thing in poetry is to say something that you need to say, not something to the world, but simply something you wanted to say. And also that you, as a poet, then have the responsibility of trying to see that those things you say aren't blown away in the wind

On Patmos, Lax used to like to swim in the sea. Nancy Goldring writes in an interview with the Brooklyn Rail, that her friend, Bob, would recite ‘poems through his snorkel – “sea … sun … sea … sun …  sea … sun …” while he was breathing in and out, to the fish’. As I read this, I feel I’m keeping hold of the horizon by a thread of abstract language.
That’s not to say I’m sat here waiting for the muse. I try not to fear the moments when I’m not writing; my non-writing days. My words are usually found at the edges of the everyday, sometimes scrawled on napkins, written diagonally on lined notebooks, old poems cut up and juxtaposed with others, a half-line murmured in the bathtub or underlined in a book, or perhaps a witticism thrown away in a tweet. But maybe, also, one day, like today, or yesterday, the dog will settle, someone else will make the tea, and the music will be just right, so I can sit down and write what I see when I close my eyes.

Sarah Cave is a writer, academic and performer. She is currently studying for a PhD at Royal Holloway researching poetic process and prayer in contemporary and post-war poetics. Sarah’s poetry has appeared in publications such as Oxford Poetry, Shearsman and Datableed. She has three pamphlets published, the latest of which, like fragile clay, is an illustrated book published by Guillemot Press. Her first collection, An Arbitrary Line, is due to be published in November 2018.