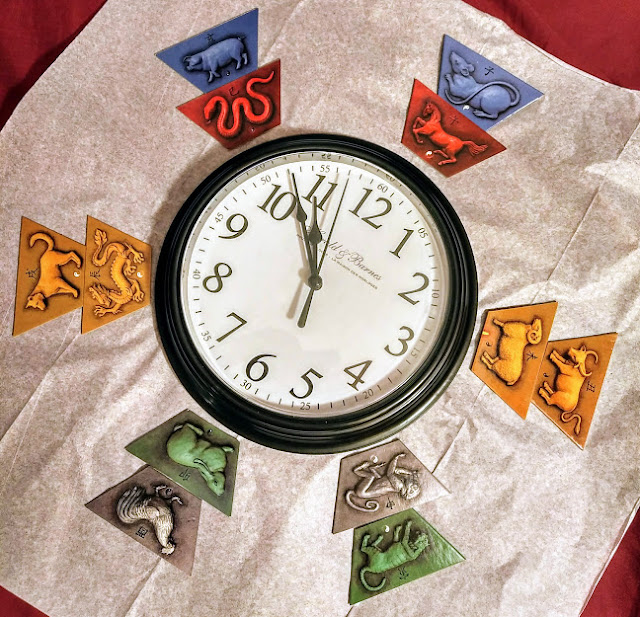 Hours of the Rabbit (5 am – 7 am): My teenage daughter’s betta fish that she named Halfmoon, is almost four years old and lethargic. It takes me a few seconds to find him behind some plants. When he swims out, I turn on the tank light. I make coffee.

Hours of the Dragon (7 am - 9 am): Doris Day(!) is singing over the PA system before O Canada and the announcements.
“What is this?” A student in the halls asks.
“Que será, será. A song from the 50s,” I tell her.
“What does that even mean?” I’m not sure if she’s confused or annoyed.
“Whatever will be, will be,” I say. Now that song’s stuck in my head.

Hours of the Snake (9 am – 11 am): I’ve been invited to deliver a workshop on writing children’s books. This is my third meeting with these grade 11 students. To add a touch of fun, I’ve divided them into five groups to play a game. They’ve named themselves Cream Puff, Snowflake Candy Cane, Milk Boom, Rainbow Jelly, and Joker.
I ask questions like How can you tighten this sentence: ‘He started walking toward the door’? Hands fly up and someone answers: “He walked toward the door.”
I’m basking in their energy and relieved that they’re getting into something as dry as condensed writing. Forty-seven questions later, Team Cream Puff and Joker are tied!
Final tie breaking question: True or false: The standard length of a children’s book is 32 pages and under 1000 words. Team Joker answers incorrectly: “No.” Team Cream Puff cheers. Sometimes, I really miss being a classroom teacher.

Hours of the Horse (11 am – 1 pm): An impromptu meeting with a vice principal brings me up to speed on a student I’ve been working with. The VP discloses that Children’s Aid and the police were involved. That was three weeks ago. I’m frustrated to be kept out of the loop. It’s not intentional, I know. So much has been happening lately; getting through the months of November and December is often exhausting.

A guidance counsellor pokes her head into my office as I’m eating my cafeteria-made butter chicken and rice. She’s looking for a student who left a math class. I haven’t seen the student but offer to help search. I run into some students I know are skipping. “Go to class,” I tell them.
“You don’t see us Miss,” they say. “Remember ‘Hear no evil, speak no evil, see no evil.’” They laugh. I taught them the story about the three wise monkeys when they wondered where the ‘see-no-evil monkey’ emoji had come from. They know I love the monkey because I was born in the Year of the Monkey.

Hours of the Sheep (1 pm – 3 pm): I’m back walking the halls but with a different student. She suffers from severe anxiety. Rather than sit and talk, I’ve discovered that walking with some of my students helps. Some are hesitant but I tell them that science backs me up. Movement releases endorphins which helps us feel better. We’ve circled the third floor six times before I ask her if she’s feeling better. “Que será, será,” she says. And again, the song plays in my head until I settle back at my desk. I’m responding to emails from classroom teachers about a grade 11 student who just arrived in Canada. I understand their frustration – the semester is almost over and the student’s language skills are low. Because I used to be an ESL student, I’m more sympathetic towards our ESL families than most teachers. If some of my colleagues only knew just how difficult adjusting to life in Canada could be …

Hours of the Monkey (3 pm – 5 pm): A committee meeting after school goes on way too long. I’m into the Hours of the Rooster (5 pm – 7 pm) when I pull into the parking lot of the Galleria, a Korean supermarket. I grab ready-to-eat kimbap and soft tofu soup. In line, I look into the shopping cart of the white couple ahead of me: hot pepper and soybean paste, tofu, frozen mackerel, anchovy stock, bean sprouts, king oyster mushrooms, ginger, and cabbage. It hits me - they’re actually cooking Korean food at home. They’re more Korean than I am, I think, which amuses me.

Hours of the Dog (7 pm – 9 pm): My daughter and I are eating Haagen-Dazs coffee ice cream and watching The Daily Show with Trevor Noah and The Big Bang Theory. Everything’s on PVR so we skip the intros and commercials.

Since our washing machine broke a couple of weeks ago, I’ve discovered the therapeutic side effect of handwashing clothes. The mild scent of soap settles my mind as the warm soapy water and fabric against my hands soothe my spirit. This is the one time I don’t want music in the background. Once relaxed, I tackle what I like least to do: endless school-related paperwork. I also have emails I still need to return.

Hours of the Pig (9 pm – 11 pm): My editor wants a third part added to the novel I’m working on. “There’s something comforting about that number,” she said. “We’ve come to expect that things happen in threes.”
“What comes in threes?” I ask my daughter.
“Three little pigs, bears, and billy goats gruff. Three Musketeers, Three Amigos, and the Three Stooges.”

I wonder: What’s my 18-year-old female runaway protagonist thinking as she visits Seoul for the first time in 1925? The country is under harsh Japanese occupation. Does she sense any imminent danger? My thoughts turn to the three words I’d heard earlier: Hear no evil, speak no evil, see no evil.


Ann Y. K. Choi’s debut novel, Kay’s Lucky Coin Variety, was a finalist for the Toronto Book Award and One of CBC Books 12 Best Canadian Debut Novels of 2016. The story was inspired by her experiences working and living above her family variety store in downtown Toronto during the 1980s. For the past 18 years, Ann has been an educator with the York Region District School Board. Her debut children’s book and new novel will be released in 2020. Her website is annykchoi.com and Twitter is @annykchoi.