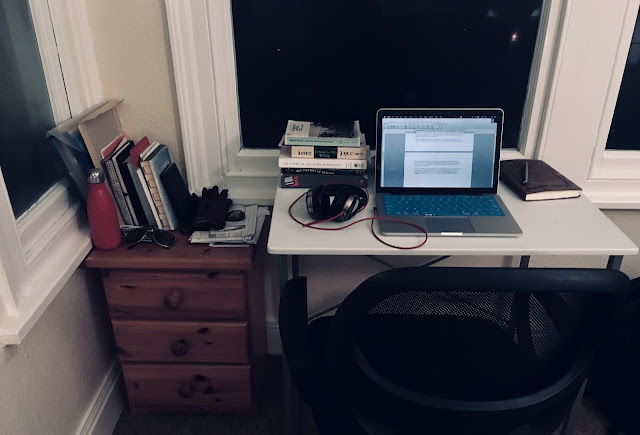 First shards of the alarm pierce my sleep. I slap the phone and burrow back into the pillows. Nine minutes later the barrage begins again, and I jolt out of bed. This is waking then, sloughing off dream in ragged strands that tangle my feet, and I stumble down the hall, a near tumble down the stairs. First tumbler of water quaffed and a few stretches done, I’m somewhat inserted back into this reality. Try to pull the worst of the tension out of my shoulders, let it fall shattered into the woollen sky.

I’ve been attempting pour-over coffee recently, determined that the complex floral delicacy of a first-rate coffee shop is a thing I should be able to produce on my own. After a few disastrous weeks of attempting to disguise acidic disappointment with milk, I’ve more or less got the hang of it. I hand grind the beans, boil water, pull out a scale, and count the time. It’s an okay commencement, feeling out the parameters of a second, grabbing time by the hand and standing quietly there, in the little kitchen, waiting. Expectant. As though the day could bloom into anything, a sea of bubbles like the carbon dioxide blooming on the brewing beans.

We live on a charming English street in a flat with a tiny fridge and no shower, but windows that flood morning light, when there is any. I like to read in the morning before work, and have realised that the shower situation need involve no suffering. Instead, it’s an excuse for indulgence. I sink into a bath surrounded by the glow of candlelight with my coffee and a volume of Proust. Get lost there. After a while my partner comes by, asks, ironically, did he find it? And I ask, what? And she says, lost time. And resolutely, stupidly sincere, I launch into a ramble, something about exuberant futility.

And somewhere about then is when I realise I’d better move real fast or be late to work, and plans of hunkering down with my laptop in a café for an hour are obliterated. Will have to write in the evening instead, in that elusive pocket between the conclusion of dinner and the onset of exhaustion.

I like the idea of writing before the day has committed its flurry of minor indignities and manage it sometimes, but most mornings are an exercise in navigating the severe discrepancy between what I’d like to accomplish and the minutes available once the alarm manages to heft me from one world into another. Another day in which I won’t work on learning Berg’s Sonata No. 1. Down the street is a dim, serene church with an ancient baby grand whose uncertain keys can be tickled into passable sonorities. I’ve got permission from the vicar a couple times over the phone, but still occasionally some grey-haired guardian of the sanctuary pounces, inquiring who I am and what I’m doing, then invites me to join the choir. Luckily, I do not sing.

I can make it to work in exactly 17 minutes, if I walk to the ferocious tune of a near jog. I blast some random metal album that iTunes has recommended and imagine myself a slick bullet slicing the air with ease. The route cuts through Sheep’s Green, a marshy bit of meadow hugging the Cambridge city centre and inhabited by shaggy weeping willows, thriving weeds, feasting swans, and, in summer, grazing cattle. Sometimes the sun manages to puncture the thick blanket the sky wraps itself with in winter, and the grasses glitter a fairyland and the willows creak and shimmy in the wind.

Once in town, I don’t have to walk past King’s College, but Google Maps once indicated that this was the fastest route, and so I stick to it. Crowds of tourists necessitate an alert dash, dodge and duck approach if I’m to traverse the street quickly. But it’s fascinating to see what sort of visage this kind of magnificent architecture takes when seen daily. For months now, I’ve not paid attention to the glowering statue of Henry VIII. Occasionally I do think about Charles Lamb’s bootscraper, tucked into a brilliant blue wall with a little bronze plaque. And, as though by ritual, I send a nod to my favourite gargoyle leering gigantically from the heights of King’s Chapel, that jolly doggy face with its tongue rakishly akimbo. As I turn the corner, I admire the fierce rows of gargoyles jutting out in a muscular fury of stone high on the walls of Gonville and Caius.

Further down the street the scents of a Subway, then of a candy shop, assault. Time to turn the music off, make sure there’s no undue commotion from the shouting drunks who occasionally careen the streets, as I prepare to unlock the small cigar and whisky shop that’s occupied my time this past year. The day speeds by in a blur of juggling multiple tasks, punctuated by serving customers. Helping people find the right item is, for the most part, pleasant. The shop is on two floors, and so I run up and down the stairs all day, attending to varied demands. It’s a life that leaves me feeling better than hunching over a stack of books for fifteen hours a day, although I miss that.

The walk home in the dark is mercifully minimal in its sensory input. A lovely abandonment to the cold, to the barren streets, to unthinking motion. I listen to the news, and the petty banalities of the day dissolve into the vastness of events whose rumour barely quivers on the edges of this quiet town.

I greet dinner with gusto. Then the satisfaction of a full belly easily balloons into a nearly irresistible inertia. A game of cards, a baking show, a nap, snuggles – possibilities so much more pleasant than taking up contest with the unnerving blankness of the page. I’ve stopped drinking coffee in the evening, having got a taste of what it feels like to actually sleep a reasonable amount and not be perpetually wound to the snapping point of anxiety.

In the end, the only recourse is sheer willpower. And the tyrannical ruling that I shall write, no matter what, requires an arbitrary principle with which it is impossible to argue. For a while now I’ve operated (with some exceptions) on the requirement of writing 1,000 words a day. No need for it to result in anything. Tired? Flat out of articulation? Unable to traverse coherently one end of an idea to another? Write anyway. And while most of it is utter shit, here and there are bits that are worth keeping. And out of them I’ll stitch together occasional progeny with whom I’m somewhat pleased.

Recently I’ve become interested in the tactile sensation of the keys, in listening to the jagged syncopation of my fingers. As though writing could be as much about the body in motion as it is about the communication of meaning. Sometimes writing feels like receding into a very quiet place and listening to time trundle along. Sometimes that is hideous. Sometimes I fall mad in love. Sometimes it’s kind of dull.

Once I’ve fulfilled the demand for a thousand words, I might be nearly passed out, or I might be energised. When it’s the latter, I work on a couple projects that are progressing at a rather glacial pace in the background. The one good thing about the intermittent rate at which I’m working on them is that I’ve got plenty of distance, which allows a greater sense of clarity, and I can make decisions with swift precision. That feels good, on the rare occasions when it happens.

I’ve got in the habit recently of watching David Attenborough documentaries before falling asleep. This can be delightfully relaxing, or it can be a nail-biting episode of horror. The armoured cricket coming for the nest of translucent baby birds. Absurd crowds of flamingos. Odd bits of earth float as the room dissolves and the waking world recedes.

Shelly Harder hails from rural Ontario and currently lives and works in Cambridge, UK.  A first chapbook, remnants, was published by Baseline Press in 2018.