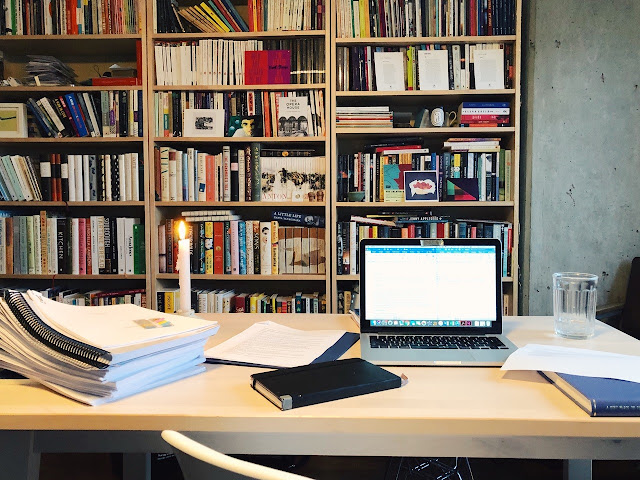 Despite the wealth of earth placements in my chart, and so despite my need for order, I have never developed a writing routine. I could blame that on my Pluto. My Taurus Sun and Mercury and my Virgo Rising goad me toward creativity, yes, but more strongly toward perfection, which paralyzes before it inspires. Anyway, aside from my astrology, there is also the matter of my material life, constellated with more things pull me away from writing than toward it.

First there is economics, a precarity which affects almost all of us who write or would like to. I would style myself as Sofia Coppola’s Marie Antoinette: “Queen of Debt!” slashed across my mental life. And so, like many of us, I work first. A blessing is that my work is somewhere that feeds my writing life immensely—the University of Alberta’s Canadian Literature Centre—and I have a boss who is generous, understanding, and who has given me every opportunity that has made even the thought of a writing life possible. Through this work I meet so many of the writers I admire and am able to provide paid reading gigs for them, find small ways to sustain their practice. But even worthwhile work drains.

Which might, of course, have something to do with trying to attend to one’s mental health at the intersections of body chemistry, the persistence of racism, colonialism, queer phobia, late capitalism, climate change, et al. Everything drains, and I’m just a white guy. We have incredible writers with world-making words to share who experience marginalization at a level I could never imagine. Think of all the writing that could be if folks didn’t have to expend so much and endure so much to survive all of this.

And then the reality of illness that for four years flares on its own schedule, swelling my stomach with its sharp pain and leaving me clasping at the bathmat or writhing in bed. This illness, through medication, through cleanses and elimination diets that flirt with disordered eating habits that I already carry with me, tires me and hurts me. I can’t concentrate through it, let alone sit or write, let alone participate in the world. But lines slice through my mind when the pain comes and I repeat them like a chant between heaving and whimpering. I write them in the notes app of my phone, which has become an archive of writing through illness.

But then the privilege of working toward hope: opening a bookstore—Glass Bookshop—with my dear friend and fellow writer Matthew Stepanic, trying to devote a space in Edmonton for literature and conversation and kinship. And so, writing business plans, trying to understand financial projections and cash flow, marketing plans, and emails expand to fill whatever’s left of a writing day.

It isn’t until very late at night, and at the expense of so much else—dishes, laundry, sometimes cooking—that I can sit down in this apartment and write the things that feel like my own. A list: poems for submission, revisions on a novel and a chapbook, the beginnings of another novel, a short article on a friend’s work, a song, and still, after all that, I feel guilty for not accomplishing more. This is another of my writing realities, feeling like I haven’t capitalized enough on each available minute, that is shared by many of the millennials I know (and don’t know) trying to find a way to sustain themselves and find meaning in their lives.

But another reality is that I have found myself among a beautiful group of writers who might have similar experiences—certainly they write under similar conditions—who, without sounding trite, remind me that, in this world, writing matters. A sink full of dishes or a full laundry hamper don’t, not quite as much. Matthew Stepanic, Vivek Shraya, Emily Hoven, Jessica Johns, Austen Lee, Lisa Martin, writers who I can turn to, in life or on the page, who pull me back toward a writing life, always at the end of a day of living, when I need it most, to be reminded that writing is care, and we should nurture the habit of caring daily.

Jason Purcell is a writer and musician living on Treaty 6 territory in Edmonton, Alberta. His writing has appeared in CV2, The Malahat Review, PRISM International, and Poetry is Dead, among others. He is Interviews Editor for Glass Buffalo and co-editor of Ten Canadian Writers in Context (UAP 2016). His chapbook, A Place More Hospitable, will be published by Anstruther Press in Spring 2019. Alongside Matthew Stepanic, he is co-founder of Glass Bookshop, Edmonton’s newest bookstore.