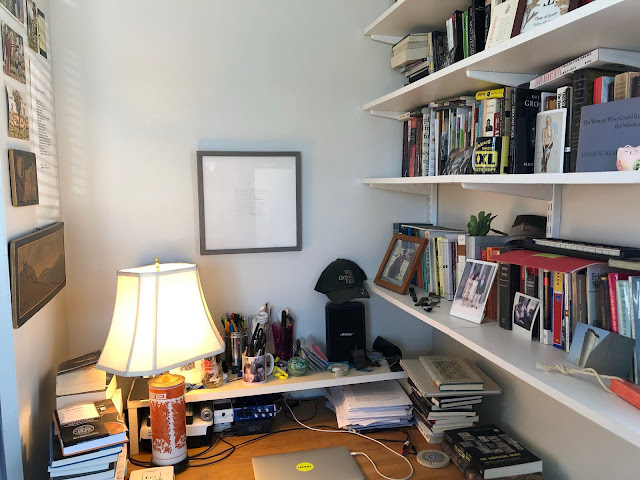 There is waking, which is a rhythmic activity. Around 4am each morning, I get up and shuffle to the bathroom and sit on the toilet. I do so—sit—because, even in the blurred moments of early morning, there is a kind of pulsing terror at work in me—the fear of fainting and falling while I urinate. To release the bladder: a trigger for fainting. And I am the kind of person who does faint, who has fallen, and fractured the envelope of the skull. Then I shuffle back to bed, the dog flexing expectantly in her spot.

There is waking, which is a rhythmic activity. Every day around 6:30am, I return to consciousness. This happens as a snap. I wake up all at once, suddenly and completely. I dress and take the dog for a walk in the graveyard. Her fascination is with the earth, the smells lodged in it. And she is a hunter, poised, silently, patiently, watching the movements of squirrels—though she is now too ancient and arthritic to catch them.

I make tea and breakfast; I listen to the news; I do French exercises. For a long time, I was the kind of writer who accumulated scraps—little phrases and notes—and then collaged them together. My work is still rooted in juxtaposition: collage and montage. But for the last six months or so, I’ve begun to write in a much more concerted, scheduled way. After I finish my French, I sit on the couch with my notebook open and read for half an hour or forty-five minutes. Usually Leslie Scalapino—Way, Considering How Exaggerated Music Is, Sight, etc. There is something about the way she bends syntax that I find not only pleasurable but reactive: to brush against her work makes writing happen. And there is something luxurious about taking some time from each day and insisting that it belongs wholly to the act of writing. That in this sliver of the morning, I will not answer any emails. I will not work. I withdraw from the daily pressure to produce value—for and through the university where I work. To write in this way is to create a rhythmic pause, a form of silence and retreat—however brief and however illusory. Even as I write in silence, in refusal, the electricity bill is accumulating and the rent is being depleted.

I am a poet who composes at the level of the book. I do not write individual lyrics: I think in terms of projects, sections, sequences. This way of working has its advantages: there are aesthetic resources and opportunities that appear only when one works at such a scale. But—particularly in the later stages of working on a large project—there are costs. It becomes difficult to write without trying to slot each line into the project. Writing ceases to be a site of play and improvisation; it becomes, instead, the laborious fulfilment of some abstract, external teleology. To write with and through Scalapino offers a kind of relief: it detaches the act of writing from the project and its burdens. I compose in sympathetic response to the microscopic movements of her syntax. Her syntax, its motion, fluid and plural, refuses to be unbent, to accommodate itself.

The rest of the day is consecrated to the business that sustains a life of writing—teaching and grading; attending meetings, workshops, and seminars; organizing readings and festivals; freelancing. I love most of this work (not freelancing) and cherish the chance to do it. And I don’t think that it is somehow separate from the act of writing. To work with students and colleagues—to train younger writers and to create space for writing to be celebrated: this is not a burden but a form of collaboration. I am always dismayed when people complain about the writing recommendations for their students or the difficulties of organizing literary institutions. For poets in particular—who work without big money or big publishers—the whole art depends on poets themselves, their work to carve a space for it from hostile institutions. The whole art depends on our collective labor to organize new, better institutions outside the boundaries of or dissident with respect to universities. To ignore the material conditions that frame, inhibit, and generate, our writing is to tacitly accept those conditions, to refuse to participate in the work of transforming them. To denounce the way those conditions affect you as an individual is to ignore the way they affect poets as workers, as part of an institutional proletariat. It is to sever solidarity.

In the evening, I return to the couch with a stack of books—monographs on the history of concrete poetry, on 19th century urban planning, architectural theory. My projects are often research oriented: I think of them as deranged or drunken monographs. They make arguments, but they do so in ways that refuse the usual standards of academic argumentation. Their arguments emerge through, syntax, juxtaposition, the visual organization of the page. The poems themselves digest and reconstitute academic knowledge. As I sleep, I imagine these arguments and facts curdling inside of me: they have the mass and density of cream. Sometimes, they boil and I wake in the middle of the night to write some strange, prophetic sentence. Recently: “We are not unsolid and cannot avoid supping on love.” When I return to Scalapino in the morning, it will be there: jagged or smooth, fermented or chilled, seeping into the writing. A shard or spread of strangeness and complexity that arrives, like all writing, from elsewhere.

Toby Altman is the author of Arcadia, Indiana (Plays Inverse, 2017) and several chapbooks, including Every Hospital by Bertrand Goldberg (Except One), winner of the 2018 Ghost Proposal Chapbook Contest. His poems can be found in Colorado Review, jubilat, Lana Turner, and other journals and anthologies. He holds a PhD in English from Northwestern University and is currently a Teaching-Writing Fellow at the Iowa Writers' Workshop.