My Writing Day Fiction : B. W. Teigland: “You are [what you will not be] tomorrow.” My watch has been set three hours behind since I left the east coast of Canada, where I had, with considerable reluctance, first ventured to call myself a fiction writer. Now, here I am already three hours behind and having to tell you what my usual day of writing looks like, when nothing about any of them is usual. In fact, My Writing Day is a performative text, in which Teigland-the-character shows us how to get from the world of not writing to the world beyond.

Writing is an empty privilege. Empty because it only means something to the author; privilege because not everyone can live well and write well.

Like a merchant’s waste book, in which they enter their day-to-day sales and purchases, all mixed up together are the jumbled contents of my various desk drawers that I have emptied out onto the floor; cover pages with upside down heteronyms printed where my name probably should be; a disquieting book of dreams sits on the nightstand; a thousand pages are in the wastebasket; a notebook is in every room; unpublished manuscripts in manila envelopes wait for a final proof (which I can’t afford all at once and so will take years to get through); other unfinished materials are stored away inside a wooden trunk or on some kind of third-party software service; and, of course, the miscellaneous marginalia and stacks of research material from the library: books, literary magazines and research journals. And yet, each day, the whole writer must move as one.

But how? Answer: It isn’t done alone.

When S—, my former writing partner, and I finally decided to go different directions, we exchanged timepieces over two small ochoko cups of gently warmed sake. Only days before this, I had been sacked from this exact Ramen noodle shop — the owner's wife, after giving me a brown envelope containing what would be my last tip-out, had said, “No-o hard feelings, then, hmm?!” I shrugged, sketched some empty gesture in the air with my hands and then, now a bit spiteful and probably grimacing like a man with several rows of teeth, immediately sat in a booth and used those earnings to order a tokkuri flask of sake.

Over our separation sake, S— and I set our clocks to the opposite of our respective time zones — click-click — and separated — tick-tick. While our days of writing together were over, our days of writing independently were just beginning to take shape.

For William Burroughs, freedom to write, in 1936, was a two-hundred-dollar monthly allowance from his family. Between 2014 and 2018, I had a royalty check ranging anywhere from about $20 to $500 a month. Alone, it wasn’t enough. As a recovering Arts major who was up to his ears in student debt, work was getting harder to find, let alone keep. Before I came out west, I was in the habit of visiting the tobacconist's on Barrington Street once a month, with my royalty cash in hand, to get a tin of Rattray’s smoking tobacco, and sometimes a replacement corncob pipe as well. Then, a block or so away, a barista would clink together my order: quadruple espresso slung into two cups, which I drank one after the other. Each night, S— and I drank hot tea or a bottle of table wine and talked shop, while listening to everything from Chet Baker to Kanye West. My conclusion has never changed about S—, my writing partner; since I happen to be writing this particular piece on 8 March 2019, International Women’s Day, I won’t hesitate to admire her again: S— is the woman I am when I actually know myself.

Because, for me, it took the two of us, both writers, both desperately living while desperately writing, to fully grasp what a day in the life of a writer would even begin to look like. I have a paper soul: I prefer a blank, white page as much as I do one crawling with inky black letters. When I write, I’ll admit, I write badly. But what’s more important than writing well is that I’ve written it down at all. And, should I grow bored with my writing day, I can always start counting the words, paragraphs and pages, adding and subtracting them to create numerous totals, adding five hundred words here or minusing two hundred words there; that is, doing the hard math for the publishers.

There are two kinds of artists: no-artists and yes-artists. We’ve all been Melville's Bartleby just as much as we’ve expelled the senseless energy of Georges Simenon, who, at his most prolific, started his writing day at six and finished only at the end of the afternoon, sometimes writing eight stories in a single day, taking only seven days to write an entire novel. In Halifax, my writing day mostly occurred from within my own head. I walked often. In fact, I was my own walking nobody. Artists I knew in the literary ghettos surrounding Dalhousie University were one of two types: the energy-expender type, who turned a lock on the world completely, or the type who spent ages not writing a single line because, they would say, “I’m searching for an adjective.”

I learned everything and nothing from both of these kinds of artists.

As for myself, when I wasn’t illegally sitting in on classes at King’s College, whose pupils are taught to say “no” to absolutely everything, regardless of whether it is good or bad art, I would, from time to time, retire to that ancient library of theirs. I seated myself on an old stool or some other piece of donated furniture, more often in the evening, in the pale green light of a traditional banker’s lamp, under whose light I played copyist, writing out entire passages of some inimitable text in an attempt to grasp whatever provocative voice I was trying to emulate next. Mostly because I always found reading others while writing myself helped clarify the exact use of my language.

For me, writing is nothing more than an accumulation of footnotes, unfinished until you choose to walk away. Imperfect until you have achieved an almost indifferent discretion towards your own material. So, in this sense, you really have to monotonize your daily existence in order to rid your writing of monotony. Applying an almost clerical tedium, I find, is precisely the impersonal emotion one should write with each day.

Perhaps it is because I don’t have enough money to be a dreamer, the greatest dreamers demanding certain social circumstance. When I do write in my half-and-half style — half-literary and half-pulp fiction, almost schizophrenically poised between religious fanaticism and a mania for scientific hegemony — I feel the dissatisfaction of the aristocrat I am not and the middle-class writer I can never be. With the democratization of art on the internet, every writer really has to commit to their craft: I’m often surprised by just how many people suddenly take up the pen. This piece, which I’m presently hammering out on my laptop, is a convenient example of this: I’ll be about number three hundred and sixty-six on the author column at the side of your screen. No sooner will this be posted before being pushed back behind an eternally new post. All that has changed is that we publish more authors, not better authors.

After Halifax, I devised a new approach. I started using a technique called web-based path writing (which is, for me, mostly just writing with or through the infosphere of the internet). While doing this, I also tried to buffer as much as I could against writer's block by having a multiplicity of narratives on the go. If that doesn’t work, I create an alter ego and write under a different name, and so a different personality. If I get a migraine, it’s either because I’m struggling too much with my variation on a theme or it’s just time to close up shop.

“Organizing your person is your only job,” I tell myself, perhaps too philosophically. “You are [what you will not be] tomorrow.”

Living so isolated, I sometimes do feel the need to communicate with someone, and I do still discuss my attempts at establishing a writing day with S—, my former writing partner. Writing, I think, is about being able to communicate your identity with others, starting with yourself, and then gradually including other people in the process.

At night, I take photographs of the city; during the day, outside my writing, I read hundreds of stories for a literary magazine, which is depressing. I see a vicious spiral: all those stories rejected by someone like me, who is in turn rejected by someone like them. Vicious because publication is about socializing your identity, which has made some kind of middle-class nihilist out of me; since all rivers socially flow to the sea of nepotism, built upon the logic of buddies and friends.

In short, there is no nutritional literature for managing a writer’s day. No one exemplary day or set of rules exists for individual writers. One day for a writer is an absurdity. Every day is different, and every writer is different every day they decide to write. Taken together, this amounts to greater and greater variance in not only the person but the style of the writing itself. Only the space of a gap, equivalent to a daydream, can show us that this is the case.

Anyways, I’m sure you’ve forgotten by now but I am still three hours behind; it is now not 5:00 but 8:00, and I feel the mild discomfort of my eyes burning and temples pounding: a migraine. I’m willing to confess that this symbol of time I’ve repeatedly hit you over the head with is really the only psychology behind my approach right now. At least until the battery in my watch dies or time stops, whichever comes first.

Fais ce que dois, advienne que pourra.
“Do your duty, come what may.”

Hours: Two to four hours of writing (the actual act of writing should always be very brief); two to four hours of research (searching for a theme, organizing notes, etc.); one to two hours of meditating (any more and I get a migraine).
Words: I’m Joycean: a good day ends with more, rather than less. During the editing process, it tends to go the other way.
Refreshments: One French press coffee in the morning; two simultaneous espressos when I’m out, exclusively for the brevity; and hot tea in the late afternoon.
Curbing Writer’s Block: Web-based path writing; writing as someone else; authoring multiple projects; think to start writing, write to stop thinking, read to start again; collaborate with other artists. 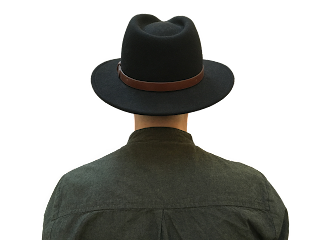 Brandon Teigland is an emerging Canadian writer. He studied Neuroscience, Contemporary Studies in Philosophy and Media Arts at Dalhousie University, King’s College and NSCAD in Halifax, NS. His most recent fiction chapbook The Weight of Skin was published by The Blasted Tree in April 2019. When not writing, he is either shooting night photography or volunteering as Art Editor and Assistant to the Fiction Editor for filling Station Magazine. He can be found on Instagram @brandon.teigland.