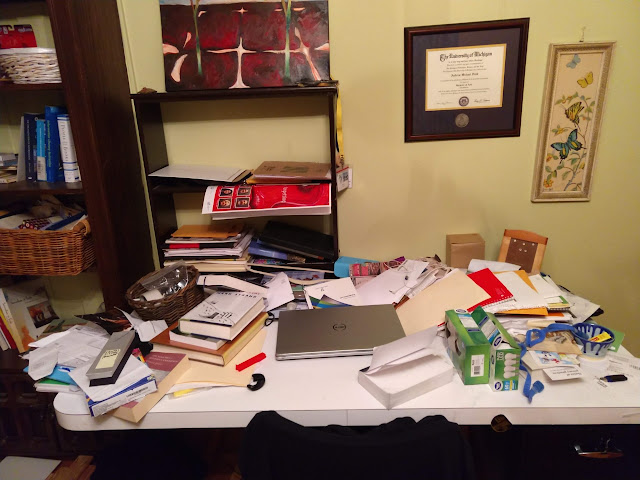 I wish I could say that I write, like John Ashbery, somewhat effortlessly, dipping with quiet surprise into the poetic stream of my unconscious, or whatever you want to call it, and resurfacing with something we call a poem.  But to say that would be disingenuous – first off, I have no ascertainable writing practice or praxis, and second off, I am not (alas!) John Ashbery.

If I have no ascertainable writing practice or praxis, how do I sometimes write – if I may call it by its holy name – poetry?

Okay, let me back up.  I do have a practice, a method, a “strategy” (please forgive me for yoking the businessspeak of “strategy” with the utterly profit-shorn and lovably, importantly quixotic enterprise of writing poems), and this is it: when my heart tells me to, when experience has reached a kind of climax, and needs release, when I feel I am operating from a place, a head space, a state of consciousness, that is privy to a poem’s modus vivendi.  Perhaps that is a horrible and unproductive and bafflingly mystical strategy.  Perhaps I need to be more disciplined, and get my head out of the clouds.  But I am wary of turning poetry into brussel sprouts.  And isn’t “praxis” a somewhat too serious word?

Having said all that, let me confess that recently, after a very long hiatus of writing pretty much nothing, I wrote a lot, and they were poem that I liked, that surprised me, and that seemed to come from a different place inside than the poems I had written earlier.  When I started writing poetry, about a decade ago, I wrote derivative Ashbery poems.  Over time, I turned towards narrative poems, with emphasis on Philip Levine and Stephen Dunn.  This has been the mode I have mostly worked in, with some detours back into Ashberyland, and into other voices that haunted me.  As I wrote these narrative poems, I would say to myself that that mode was good, because it was communicable.  It could be understood by my parents, who I hoped would somehow like my poetry (especially my Mom, who was a journalist for the Detroit News, and appreciated the more feeling-full side of life).  Unfortunately, I had the suspicion that my parents would not like John Ashbery’s poetry, (and hence my own derivative scrawlings), and even be suspicious of it as something “non-art,” the same way people look at Mark Rothko’s paintings and say (wrongly, I believe!), “What is this mess of floating fields?  I could do that in my sleep!”

So what happened recently?  And let me preface this by saying that I have no idea whether these new poems are any good.  Maybe they are very, very bad.  But (and this is the important thing), I  believe in them, in my own idiosyncratic way, because their issuing-forth was so surprising.

What happened is this: I sat down to write, and was immediately flooded, but subtly, with the thought of Ashbery’s great poem “The Skaters.”  What do I mean?  I felt his voice working in me, and it was the voice from “The Skaters” – exuberant, fearless, adventurous, questing, curious, utterly fascinating, sensitive, lyrical, funny, weird.  When I wrote the first poem in the series of new poems I’ve been working on, it seemed to proceed from a voice that was not my own, a voice that was coming (I felt) from the ghost of John Ashbery.  But it was my voice, too – that was the strange thing.  It was a twinning, a twangling, an intermingling, a voicing.  If this sounds occult, so be it, but I don’t think we need to stay on that note of the esoteric to really get at an understanding of this.  Why?  Because this was exactly what I was doing, more than a decade ago, when I wrote my utterly imitative Ashbery poems.  I was copying a voice I loved, that reached me (the most important part of reading) and spoke to me.  The only thing that was different this time, was that time and experience intervened.  I had become a different person.  So the said poem that came forth was a different poem from the old aping of JA, with different shadows, different longings, late 30-something poetic happenings, late 30-something imaginative stuff.

And then what happened, after that first poem, was writing for the sheer joy of writing, usually with music in the background, John Cage, Mendelsohn, Berlioz, the stuff that really got me going and thinking, feeling and imagining.  I wrote these poems usually at night, when inspiration was hopping around in my heart, the kids were in bed, my wife was reading or watching t.v., and I felt I had to write.  It was imperative and urgent to get down on the laptop screen the motions and movements of my thrust-into-poem-thought mind.  I tried not to control the process, but simply let the writing happen and shape itself without me getting in the way.

So, in a weird way, there was a method to my madness, which essentially reflected one of my deepest values, which was this: poetry is a sacred art, whether it’s about dogshit or God.  If we feel deeply a sense of the sacred, whether we call it life, love, meaning, fullness, passion, enthusiasm, or whatever, then we are living poetry.  If we then decide to try and use language to bring these things to other people, which is another way of saying bring these things to ourselves, then we are poets.  And if we succeed one day in writing that impossible thing we call a poem, then that is a very good thing, and should be honored by a standing ovation from our most revered ancestors.  My own methods may one day change.  Maybe one day I’ll adopt a praxis, like a very solemn-looking dog.  But the main thing is to feel inspired, to live a life of and for and from that.  And then maybe, one day, a poem, strange and beautiful creature, will voice its being into your ear.

Andrew Field is a poet and adult services librarian who lives in University Heights, OH, with his wife and two kids.  He has published poems with Mantis and Ocean State Review, and essays with Empty Mirror and B O D Y Literature.  He has a new manuscript on his hands, and is sending that puppy out.