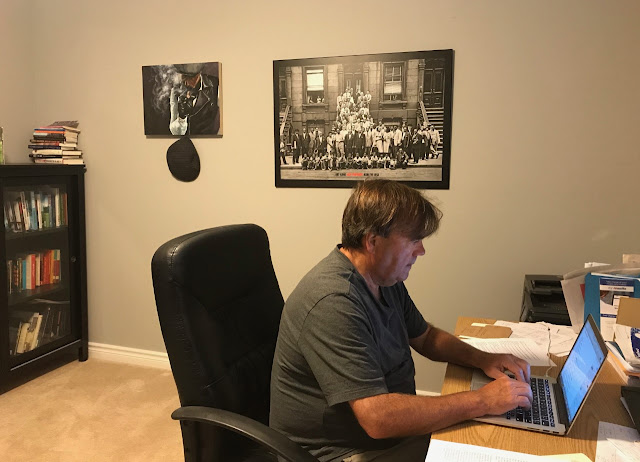 Nobel Prize winner Bob Dylan compared time to a jet plane — you know, it moves too fast. Another Nobel winner, Albert Einstein, used trains, relatively speaking, to explain time. With all due respect to Nobel Laureates, I see time as a balloon. When you have little of it, time expands and you are incredibly productive. When your time is boundless, it deflates to a limp rubbery contrivance: never utilized, simply wasted.

I “returned” to writing in 2008. The reasons I didn’t write for twenty years is a different story for a different essay. But on Saturday morning of the 2008 Thanksgiving long weekend, around 6 a.m., I went into the home office I share with my wife, closed the door, and began to write the novel I’d been noodling for that entire twenty years. I worked for a natural gas utility with the gold standard of retirement benefits for those who lasted the duration — a Defined Benefit Pension — and nearly a decade stretched before me before I could leave clutching the gold. As a morning person whose energy level is highest when the sun rises, my writing time was restricted to weekends and vacation days: evening and late night creative writing is impossible for me. More than two years after that Thanksgiving Saturday, I finished Son of Jack Nasty, a 140,000 word novel set in London, Ontario during the 60s & 70s, exploring, along with its fictional protagonist, the city and its artists: Jack Chambers and Greg Curnoe. A novel yet to be published.

While learning about and executing the query process to literary agents and publishers, I continued to write every Saturday and Sunday morning, Mondays on long weekends, and some vacation days taken specifically for that purpose. The golden date for exiting the corporate world was February 1, 2017, and between finishing Son of Jack Nasty and that date, I wrote another novel, the first draft of a third, four screenplays and a handful of short stories.

Along the way, obtaining neither agent nor publisher for Son of Jack Nasty, I decided to hold off the query process for the second novel, Fair — a short literary work which follows a young man living within the largest homeless community in North America, L.A.’s Skid Row. I knew that once I completed my 30 year voluntary sentence at the gas company, I’d have all the time in the world to turn my full attention to getting Fair published. I also thought if I couldn’t crack traditional publishing, I could use all that time to investigate self-publishing. Of course, as a seasoned reader, you’ve already deduced this simple plot: time deflated to a limp rubbery contrivance, a tool as useless to me as a sieve would be to bail water from a boat.

The day my 30 corporate years ended my wife and I decamped to Santa Monica, California for the winter. No longer a part-time writer: I was full-time. So, let us inventory my accomplishments as full-time writer that year. Query letter writing? Zero. New creative writing accomplishments, whether short story or screenplay? Zero. Moving to the second draft of the third novel? Never mind that, let me tell you about the best drinking hole on Venice Beach — though it’s now been gentrified into another hipster hangout. Certainly I rose early each morning, my lifetime habit, sat down with my laptop and…explored all the wonderful corners of the universe guided by my new favourite uncle, Uncle Google. Oh, the places Uncle Google took me: nostalgic, romantic, awesome, frightening, breathtaking, educational, spiritual and pornographic (naughty, naughty Uncle Google). All that intrepid travelling during my prime creative writing hours of 6 a.m. to noon, with Uncle Google turning that limp rubbery contrivance from tool to weapon, elongating it so as to efficiently strangle both my drive and my creativity. In the corporate world we had an axiom about how the prioritization of work gets bastardized: the urgent overtakes the important. But what happens when you lose all sense of urgency, when you are hypnotized by Mick’s boast of time being on your side? For me, lacking urgency, the important sank to the bottom of the ocean like a water-filled boat that a useless sieve could not bail.

I had all the time in the world, yet it took me eighteen months before I started to write those query letters for Fair, a kickstart provided by a workshop with a literary agent in the summer of 2018 — thank you for that Canadian Author’s Association! After six months of agent rejections, I turned my attention to publishers and in January, while on route to Santa Monica for the third winter, I received an offer to publish from The Porcupine’s Quill. Fair will come out next spring, 2020.

Are my mornings now more productive? Well, I did finish the third draft of that third novel, Of Murders and Merry Go Rounds. The end of May, my wonderful editor, Chandra Wohleber (who freelances and I highly recommend), sent me her marked-up copy of Fair. I’ve spent every morning poring over the edits, both intrigued and awed by Chandra’s respect for, and insight into, my writing. That said, from February 2017 to now I have written one new short story and one new poem. Each and every morning I try disciplining Uncle Google to guide me to areas where I can learn the rigours of marketing my novel so I’m fully prepared when it is published, but that tenacious bastard continues to assume I want to know much more about intimate details of the Gilligan’s Island original cast members. I guess Uncle Google remembers me fondly as a ten year old, glued to the television set every week, desperate to see if the smartest man in the world, the Professor, would finally figure out how to fix a small hole in the boat.

I have reason — hoping reason is not a synonym for excuse — to wait until Fair is published before driving forward with my third novel. Yet all the while, I can’t help to think Robert Zimmerman is the most worthy of Nobel Prize winners: time sure seems to be flying by me as fast as a jet plane.

Ed Seaward completed his first novel in 2011. Since then, he has written short stories and screenplays, including Mother Daughter Happiness, which was a finalist at the 2019 Pasadena International Film Festival. His second novel, Fair, will be published by The Porcupine’s Quill in 2020. Ed is polishing his third novel, Of Murder and Merry-Go-Rounds, a slice-of-life literary fiction exploring sex and violence through the eyes of a Toronto homicide detective. After thirty years in the corporate world with a natural gas company, Ed now spends his time cashing pension cheques, writing, and serving on the executive of the Canadian Authors Association - Toronto Branch. He lives in Georgetown, Ontario.   @EdSeaward